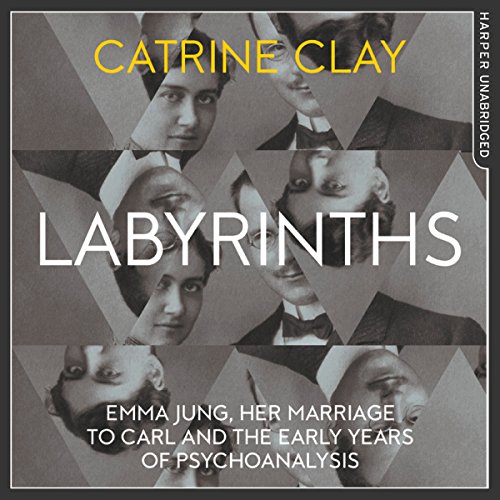 By: Catrine Clay
Narrated by: Karen Cass
Try for £0.00

The story of Emma and Carl Jung's highly unconventional marriage, their relationship with Freud and their part in the early years of psychoanalysis.

Emma Jung was clever, ambitious and immensely wealthy, one of the richest heiresses in Switzerland when, aged 17, she met and fell in love with Carl Jung, a handsome, penniless medical student. Determined to share his adventurous life and to continue her own studies, she was too young to understand Carl's complex personality or conceive the dramas that lay ahead.

Labyrinths tells the story of the Jungs' unconventional marriage and their friendship and, following publication of Jung's The Psychology of the Unconscious, subsequent rift with Freud. It traces Jung's development of word association, notions of the archetype, the collective unconscious, the concepts of extraversion and introversion and the role played by both Carl and Emma in the early development of the scandalous new psychoanalysis movement.

In its many twists and turns, the Jung marriage was indeed labyrinthine, and Emma was forced to fight with everything she had to come to terms with Carl's brilliant, complex character and to keep her husband close to her. His belief in polygamy led to many extramarital affairs, including a ménage a trois with a former patient, Toni Wolff, that lasted some 30 years. But the marriage endured, and Emma realised her ambition to become a noted analyst in her own right.

What listeners say about Labyrinths

Emma Rauschenbach, a very wealthy Swiss heiress, was only 17 when Carl Jung, a far from well-off doctor of the insane from a peasant background, first proposed to her. Emma's father was suffering hideously from the syphilis which would eventually kill him, and her mother, ashamed of this dark family secret, encouraged her in the match. Their truly labyrinthine marriage lasted 52 years and weathered Carl's many affairs as well as a 30-year menage-a-trois with the overbearing Toni Wolff who was required by Jung as his 'anima' and suffered by Emma for his sake. Emma bore five children and then retired to another bedroom dreading yet another 'little blessing'; pursued her own research on The Holy Grail in particular; maintained her friendship with Sigmund Freud after he and Jung fell out, and eventually became a highly respected psychoanalyst in her own right. That's some achievement!
Carl Jung was not the easiest of men, apart from his need for other women and his habit of going off on long travels on his own leaving Emma alone with her new-borns. Jung was two personalities. There was the kind, tender Carl whom Emma had grown to love, and there was 'personality number 2' who was rude, neurotic and callous. Personality 1 could tell delightful funny stories to his children; personality 2 could flip in a moment into a destructive and hurtful rage. In truth, Jung was no less disturbed than his patients, but this enabled him to pursue the psychoanalysis.
The strength of Catrine Clay's book is that she explores Emma and Carl as individual private people as well as the main tenets of Jung's theories on the interpretation of dreams, the subconscious and the animus and so on - all those elements which formed the bed rock of the new science of psychoanalysis. The whole is full of detail written with admirable clarity and apparent simplicity. The relationship between the two in all its complexities is fascinating, and Jung's despair at her death deeply moving.
The narrator has a very pleasant voice and the depths of Emma's feelings are conveyed with sensitivity. I gave her 4 instead of 5 only because when she quotes from letters or lectures of men, she adopts a 'male' voice which can sound merely like a woman trying to sound like a man. It would be better not to try!
This is a fascinating study and makes a very interesting companion to Jung's 'Memories, Dreams and Reflections' which I reviewed in June of this year.

A great book that is abundant in information about the great relationships going on in the Jungian world at this time.

I loved it , listened to it over and over again . BRILLIANT 🙃🙃

I'm so glad I got to listen to this book via audible. I found it a captivating re telling of the lives of Emma and Carl and earl psychotherapy. I come from a background in psychology, but never learnt the ins and outs of all those involved in the society and how relationships forged together and drifted apparat! Really quite a wonderful insight

Comprehending Jung through his wife

Emma Jung was born to be Carl Jung's helpmate and support and in a very particular way appears to have provided the unique counterpoint mentally and physically that his huge personality demanded - especially as fidelity to his wife was not part of his life expression and he made no apology for this - demanding that those around him accepted that we are all plagued by doubts about monogamy at some time in
our lives
Can the human condition contain such inhibition and still develop fully? His wife Emma , who
Loved him Unconditionally - had no choice but to endure - and in time accept the conflict as best she could -and she arrived at that acceptance without bitterness - even transcending it and strengthening their love over sixty years plus of marriage -
Clearly his bedrock - if this wonderful story illustrates anything it is the almost impossible aim of attempting. truly Unconditional Love - a very tall order indeed
This is above all the story of an individuated woman - a rare achievement - who was loved and admired and appreciated by all who came into her circle / especially her uniquely challenging husband - who always knew her authentic value

I so enjoyed this take on this fascinating piece of history. I recommend it wholeheartedly.

This was recommended to me but I have been very disappointed by it. The reader is poor; inflection forced as if trying to make the reading interesting. I couldn’t tell if the book was as poor as I thought or if was damaged by the reading. But certainly I would not recommend it. There are better books about Jung and this did not examine Emma in any depth