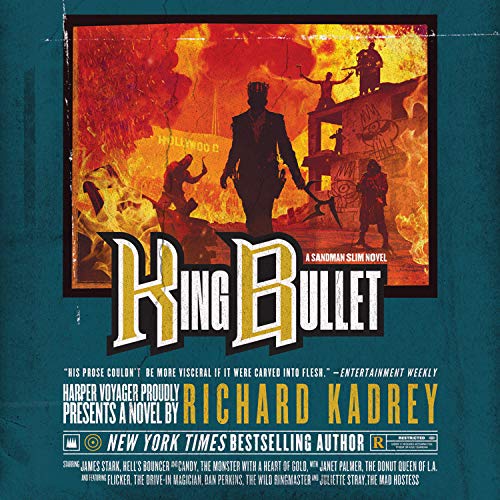 By: Richard Kadrey
Narrated by: MacLeod Andrews
Try for £0.00

It’s been three months since Stark stopped a death cult and a potential ghost apocalypse, and he’s at loose ends. His personal life is a mess. His professional life isn’t much better. And the world...well, the world is going to shit. LA is gripped by a viral epidemic that has everyone wearing masks and keeping their distance from each other. But what’s even more frightening is the Shoggot gang and their leader, King Bullet, who revels in the city’s collapse.

Who is King Bullet? No one knows. He seemingly came from nowhere with nothing but a taste for mayhem and an army of crazed killers who follow his every command. What king wants seems simple on it face: chaos. Destruction. A city in flames. But there’s more to the king and his plans for LA, and what Stark discovers will change heaven, Earth and Stark himself forever.

What listeners say about King Bullet

Sad it's the last one

I'm going to miss Sandman Slim - 'The Monster who kills monsters'. I've thoroughly enjoyed following his adventures and the narrator had always been the perfect 'Stark' voice.

A great narration of a magnificent story!

I've been a huge fan of the Sandman Slim books right from the beginning and Richard Kadrey has never failed to deliver! As I usually listen to the audio book versions, the narration by Macleod Andrews remains as excellent as always too. Buy the entire Sandman Slim set - you'll be glad you did!

Very good but not the best in series

You have to read the last one, but I’m a bit disappointed because there is not lots of action, and James takes beatings all the way through, but what a great series of books, will miss James stark, wish he went out in a blaze of glory, made me want to start at book 1

sorry this was just terrible. the narrator as always is excellent, but the story was idiotic, badly written and a real f*** you to all the sandman slim fans who stayed on to the last book.