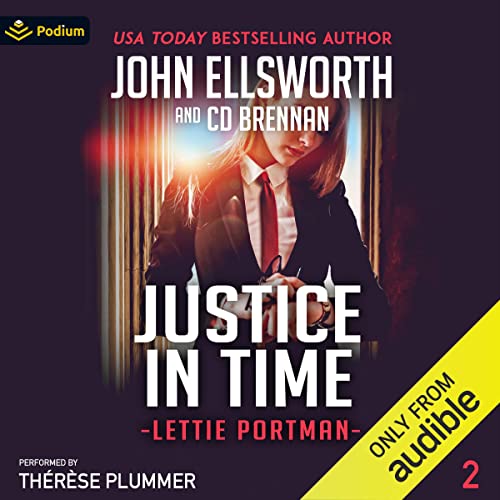 By: John Ellsworth,CD Brennan
Narrated by: Therese Plummer
Try for £0.00

Assistant District Attorney Lettie Portman charges a US senator with the murder of his wife.

The wife was found dead, sitting in her Mercedes with a garden hose from the exhaust into her window. Suicide? Maybe, except the detectives learn the wife's fingerprints are nowhere on the hose. She appears to reach from the grave and point an accusing finger at her husband. And there's another twist: The senator's million-dollar lawyer is involved in a deadly conspiracy against Lettie.

Lettie is hard at work on the case when she finds Detective Tony Reedy won't give up on her. She's been injured before when she lost her childhood. But she wants to love again and she asks him to wait. He reaches out, but will he be able to touch her?

What listeners say about Justice in Time

Although I liked the first book in this series more, I think this is a very good book as well. The way the book begins is nowhere near where it ends. The story takes an about face about 1/2 way through and there went all my predictions! From that point on it’s like watching dominoes fall. Lettie and a team working with her set up a corrupt senator and the outcome was a complete surprise.
Therese Plummer does a great job narrating.
HIGHLY RECOMMENDED.
If you found this review helpful please indicate so.
Thank You.

I really like this lady doing the narration. She took a very good Detailed story And made it her own. Good suspense and many Twist and turn. And for me it starts a new series By John Ellsworth.