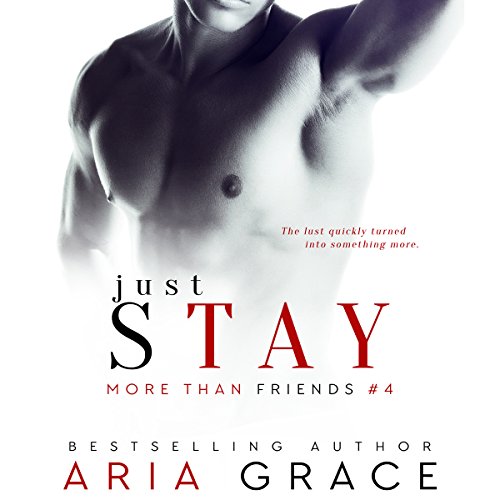 When Spencer agreed to help take down the leader of a Portland crime family, he didn't realize he'd end the night with the bloodied body of an unknowing accomplice in his arms. His initial interest in Dylan was purely physical, but when Dylan stepped in front of Topher's gun and saved Spencer, the lust quickly turned into something more. Something he wasn't sure he'd ever find in the fast-paced dot com world he was from.

What listeners say about Just Stay: More Than Friends, Book 4

Suspence and romance Loved it

I loved the way I thought the story was going to be a will he won't he romance and it turned into so much more. Dillon and Spencer met in book 3 when Dillon took a bullet to save Spencer. Spencer is interested in Dillon but is hesitant and circumstances get in way. When they do get together it is hot, and phone sex.
The suspense comes from who is after Dillon and Andre? (Andre is the Art forger from book 3) Aria keeps you guessing right to the end.
Chris Chambers does a great job as narrator, he gives a clear distinction between the two characters, timid Andre and Dillon's sister. He also brought out the emotions.
Really great book to listen to.


A free copy of the book was provided by the author in exchange for an honest review.

Spencer & Dylan's Story. I'm glad that Geeky Spencer gets his HEA in this story and Dylan is a good match for him. Even though Dylan doesn't think he is... I was surprised that Spencer doesn't really have a huge issue with Dylan's job, but happy he is open minded about it. I really liked hearing about the secondary Characters and cant wait to hear Georgie's book!
The Audio with Chris Chambers as the narrator was good. No problems with the narration.

Would you listen to Just Stay: More Than Friends, Book 4 again? Why?

Yes, I would. Did you not see my headline?

I liked Spencer, he was stronger than I initially thought he'd be. He surprised me.

Nope, this is my first. But I'll seek out more from him.

I liked that I was surprised by the content.

Dylan and Spencer meet and fall for each other under the strangest of circumstances. Spencer is working undercover trying to take down a Mafioso type family and Dylan is the targets friend and bodyguard. Dylan has been growing tired of Topher’s manipulations for a while, so when Topher pulls a gun on Spencer, Dylan steps in the way. Over the next several weeks, Dylan and Spencer exchange phone calls and get to know one another better through long distance calls and occasional phone sex. When Topher’s sins fall back on Dylan and Spencer winds up sideways involved, Dylan will do whatever it takes to keep the man he’s fallen for out of harm’s way.

I was surprised by where the storyline in the book went, pleasantly surprised. There is a mystery that slowly unravels and I was kind of on the edge of my seat throughout. I loved the chemistry between Dylan and Spencer, but Grace also took the time to let them get to know each other before they fell into bed, and eventually in love. They were sexy and passionate and sometimes surprising with where they went intimately speaking.

This is the first book I’ve listened to with this narrator and he wasn’t half bad. There were a few characters that had the same vocal tone, so that was a little confusing, but the main characters all had their own voice, so he is forgiven. I’ll be looking for more of his work, that’s for sure. If you are looking for a short, suspenseful, sexy story then this one is a must read.

Where does Just Stay: More Than Friends, Book 4 rank among all the audiobooks you’ve listened to so far?

Chris Chambers did an excellent job! He was definitely memorable and I will be looking out for his name in the future.

What was one of the most memorable moments of Just Stay: More Than Friends, Book 4?

No I haven't. Unfortunately but that will be remedied.

Andre's story. He was just so sweet. I hope he gets his own HEA.

I can't wait to get to the rest of the books in this series!

Wonderful continuation of the series

Where does Just Stay: More Than Friends, Book 4 rank among all the audiobooks you’ve listened to so far?

I really enjoyed this story for a short read (I generally stay away from novellas) this was a nice breakaway from the earlier GFY stories and included a fun mafiosa element.

What was one of the most memorable moments of Just Stay: More Than Friends, Book 4?

I really enjoyed the early relationship with the phone calls and flirting :D

What does Chris Chambers bring to the story that you wouldn’t experience if you just read the book?

I enjoyed Chris' reading as I hadn't been all that thrilled with the other narrators to the series stories. I think he had a fun and sexy voice and was able to put life and vitality into the characters

I am so obsessed with this series right now. Dylan and Spencer have an instant connection when Dylan literally takes a bullet for Spencer. What starts out as a phone relationship, soon blooms into a beautiful love.

Can't get enough. I am speeding through all these books but will be so sad when they are done.

What did you love best about Just Stay: More Than Friends, Book 4?

Disclaimer: Review based on a free audio book provided by the author.

The book took me by surprise in that there was a whole lot more to the story than I originally expected. Its just under four hours, but with the subplot it reads like a longer book. Not long winded, but you feel like you know the characters pretty well by the end.

Would you be willing to try another book from Aria Grace? Why or why not?

Yes, I'm going to go back and get all the books in this series. The story was fun, with a great amount of action, and the sex scenes were hot. I can't wait to read more.

I'd never listened to anything by him, but his narration was fine. I would have liked more variation in the character voices, but he did a great job with inflection and pacing.

Nice bit of quick and dirty fluff. Narrator definitely helped the story along.

Aria Grace had done it again. She has brought the plight of sex-workers into the mainstream with Hands On. This is an excellent book about two men from two different worlds who fall in love.

Spencer comes from a California upper socio-economic class of uber-achievers. Dillon rises from the position of bodyguard to business manager of a mafia front organization that disguises a gay brothal. Dillon sincerely cares about these men. He looks out for their safety and does what he can to help them.

The two men meet when Dillon risks his life to protect Spencer. Spencer returns the favor. They fall in love and Spencer seeks to really help these men get badly needed health care insurance. These two men make a remarkable team.

I'm impressed with the subject matter, as always, Ms. Grace has her finger on the pulse of this generation as she takes on subjects with the dignity and respect that they deserve.

Spencer is one of my all time favorite characters of Aria Grace! His and Dillon's story is full of flirtation and lust, and is an absolutely fun ride in their world!

Chris Chambers' sexy narration made the characters come to life. His rich tone and smooth speaking had me falling in love with the characters all over again!