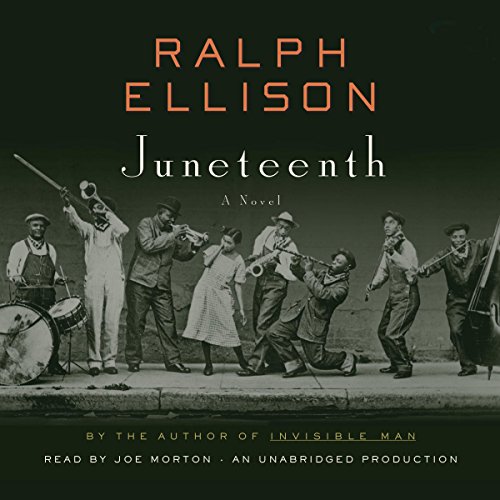 A Novel
By: Ralph Ellison
Narrated by: Joe Morton
Length: 14 hrs and 7 mins
Categories: Fiction, Literary
5 out of 5 stars 5.0 (2 ratings)

From Ralph Ellison - author of the classic novel of African-American experience, Invisible Man - the long-awaited second novel. Here is the master of American vernacular - the rhythms of jazz and gospel and ordinary speech - at the height of his powers, telling a powerful, evocative tale of a prodigal of the twentieth century.

"Tell me what happened while there's still time," demands the dying Senator Adam Sunraider to the itinerate Negro preacher whom he calls Daddy Hickman. As a young man, Sunraider was Bliss, an orphan taken in by Hickman and raised to be a preacher like himself. Bliss's history encompasses the joys of young southern boyhood; bucolic days as a filmmaker, lovemaking in a field in the Oklahoma sun. And behind it all lies a mystery: how did this chosen child become the man who would deny everything to achieve his goals? Brilliantly crafted, moving, wise, Juneteenth is the work of an American master.

"[A] vastly ambitious informing allegory, an allegory made rich, as in Invisible man, with the sensory details of which Ellison was such a master." ( The New York Review of Books)
"[A]n extraordinary book, a work of staggering virtuosity. With its publication, a giant world of literature has just grown twice as tall." ( Newsday)
"[A] stunning achievement.... Juneteenth is a tour de force of untutored eloquence. Ellison sought no less than to create a Book of Blackness, a literary composition of the tradition at its most sublime and fundamental." (Henry Louis Gates, Jr., Time)

Where does Juneteenth rank among all the audiobooks you’ve listened to so far?

What does Joe Morton bring to the story that you wouldn’t experience if you just read the book?

I think Joe Morton should be performing this book on stage. He paints this book with his voice, and listening to him is definitely a richer experience than reading the book in print.

"Invisible Man" and "Juneteenth" are necessary, brilliant and will have an undeniable physical, emotional, intellectual and moral impact on any reader. Stunningly written and beautifully voiced by Mr. Morton.

The Huckleberry Finn of the Twentieth Century

What did you love best about Juneteenth?

I love best the rich language of Juneteenth that combined preacher sermons, political diatribes, jazz, blues, and even Br'er Rabbit makes an appearance. Ellison states in his notes that he wrote a twentieth century version of Twain's Huckleberry Finn in that it features a modern day version of Huck and Jim exploring not only a new territory, but what it means to be black and white in America. The rich language tapestry also reminds me of Shakespeare, Melville, and Faulkner.

What was one of the most memorable moments of Juneteenth?

I do not want to give to much away, but it involves a casket at a Juneteenth revival meeting. You will be both shocked and tickled. The entire book and the trajectories of the characters pivot on this masterfully realized scene.

As he did in Invisible Man, Joe Morton gives a masterful, rich performance that infused jazz, blues, playing the dozens, tall tales, preacher sermons, and political stump speeches. He can go deep with his baritone voice. With an ease, he shifts from character to distinct character without skipping a beat. No one can match his skill as a narrator of black dialect. He rose to the occasion to match and give voice to the author's vision of a tapestry of language.

Juneteenth is a must read for anyone who loved Invisible Man. It is even more ambitious than his signature work. It provides a nice bookend to explore his ideas of race in America.

Hopefully would have been better if it was finishe

Would you try another book from Ralph Ellison and/or Joe Morton?

Would you be willing to try another book from Ralph Ellison? Why or why not?

Yes. His other book, Invisible Man has been on my list of books to read for a long time.

What does Joe Morton bring to the story that you wouldn’t experience if you just read the book?

He's a great orator, which is a plus in this book with all it's orations. He also does the quieter parts well.

It’s a shame Ralph Ellison never was able to finish his second novel. In this edition, editor John Callahan tells the story of how he was working on it for years and years, and just when he had it nearly finished, the manuscript, or at least a large part of it, was destroyed in a fire. He went back to working on it, but was never able to get it to that point again. Working with it after Ellison’s death, Callahan determined that the existing material could likely have become three novels, but none of them was completely finished. What he was able to put together as the most coherent part of the narrative is Juneteenth, which was apparently intended to be the middle part of the story. I think I would have liked the story better if all the parts had been there.
Senator Adam Sunraider, a politician who has built a career out of a blatantly racist attitude, is speechifying on the floor of the senate when somebody in the gallery starts shooting at him. As he is fighting for his life in the hospital, it is surprisingly an old black preacher he calls ‘Daddy Hickman’ that he asks for.
In a long series of flashbacks and reminiscences we learn the story of how Daddy Hickman raised Sunraider (known in childhood as ‘Bliss’) from birth, and of some of his exploits after he ran away from Daddy Hickman and the church.
Anyone who is a fan of good old-time black preaching will doubtless like the book, as a good portion of it is sermons from the long-ago past. The narrator, Joe Morton does an excellent job with this book.

When you have to explain...

In the first 30 minutes the editor explains what the book is about. If not for that, I would not have been able to follow the book at all. I loved Invisible Man and I had never heard of Juneteenth, so I was excited to read another Ralph Ellison novel.
I was able to follow it in spots, but in the last two hours of the book, I closed it, I just couldn't finish. Instead of a flowing cogent novel, I felt that I was in the middle of the author's disjointed dream. I'm going to listen to Invisible Man again, and I'm profoundly sorry that I couldn't like Juneteenth.

I recently re-read Invisible Man and yearned for more. I love this story. At times, I had to rewind and relisten but thats ok. I highly recommend as this book is more relevant than ever!

no character development. no plot. &the author switches thought mid sentence... only good thing to day about thid book is the narrator, he kept me listening for as long as i did.