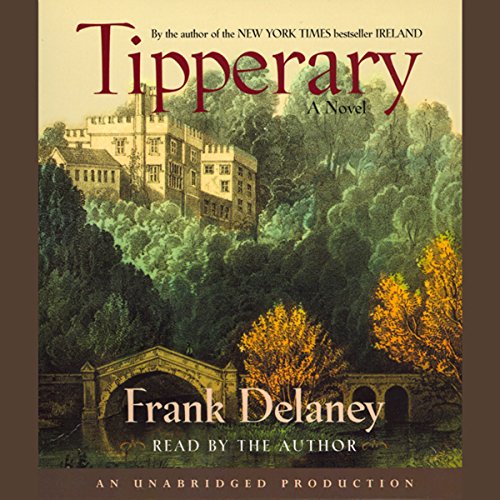 “My wooing began in passion, was defined by violence and circumscribed by land; all these elements molded my soul.” So writes Charles O’Brien, the unforgettable hero of best-selling author Frank Delaney’s extraordinary novel - a sweeping epic of obsession, profound devotion, and compelling history involving a turbulent era that would shape modern Ireland.

Born into a respected Irish-Anglo family in 1860, Charles loves his native land and its long-suffering but irrepressible people. As a healer, he travels the countryside dispensing traditional cures while soaking up stories and legends of bygone times - and witnessing the painful, often violent birth of land-reform measures destined to lead to Irish independence. At the age of 40, summoned to Paris to treat his dying countryman - the infamous Oscar Wilde - Charles experiences the fateful moment of his life. In a chance encounter with a beautiful and determined young Englishwoman, 18-year-old April Burke, he is instantly and passionately smitten - but callously rejected. Vowing to improve himself, Charles returns to Ireland, where he undertakes the preservation of the great and abandoned estate of Tipperary, in whose shadow he has lived his whole life - and which, he discovers, may belong to April and her father.

As Charles pursues his obsession, he writes the "History" of his own life and country. While doing so, he meets the great figures of the day, including Charles Parnell, William Butler Yeats, and George Bernard Shaw. And he also falls victim to less well-known characters - who prove far more dangerous. Tipperary also features a second "historian": a present-day commentator, a retired and obscure history teacher who suddenly discovers that he has much at stake in the telling of Charles’ story.

In this gloriously absorbing and utterly satisfying novel, a man's passion for the woman he loves is twinned with his country's emergence as a nation. With storytelling as sweeping and dramatic as the land itself, myth, fact, and fiction are all woven together with the power of the great 19th-century novelists. Tipperary once again proves Frank Delaney's unrivaled mastery at bringing Irish history to life.

“The narrative moves swiftly and surely.... A sort of Irish Gone with the Wind, marked by sly humor, historical awareness, and plenty of staying power.” (Kirkus Reviews)

It took me quite a while to get round to listening to this book. However when I did I was pleasantly surprised. I had thought it was more of a history but it is rather a historical novel. It is well narrated and gripping and manages to educate at the same time. The way the story is told from the point of view of an amateur historian going through old diaries and letters makes you want to believe every word and actually a little bit disappointed when you find out that the story isn't actually true

Excellent performance. from the author

Delaney can tell a story

A delightful listen, well paced, keeping one hanging in throughout without any dreary areas, and good surprises that only real life can dish up. If the star rating system allowed I would give this novel 4 1/2 stars, losing 1/2 a star because occasionally I wasn't too sure who that section was about. Was it Charles speaking, or his mother or his friend? Then the lights come on and a short rewind is necessary to fully appreciate it.

Delightful. Charming. Enchanting. Frank Delaney is a master storyteller and a magnificent narrator. His writing style and superb voice combine to magically transport the listener to another place and time with vivid colors and captivating characters.

This story is a little complicated so I was forced to listen to it again and again to completely understand what was happening. OH MY! Don’t throw me into that briar patch! I enjoyed every minute of it.

Also, I highly recommend Ireland: A Novel and Simple Courage. I sincerely hope Mr. Delaney records all of his other written works.

Ditto to what Kathy wrote about this book. This is one of those great audio books that some of spend so much time looking for. I will surely listen to it again.

My wife and I listen to a lot of audio books in the car as we travel. This was another fantastic story that lead us through "Ireland". With enjoyable characters and a plot that thickens as Ireland changes. We think you should hear this book and also the authors other book Ireland which is also wonderful!

Frank Delaney is a shanachie, following on in the old tradition of the storytellers of Ireland. This would seem to be the method he employs, but to be more precise, behind the apparent simplicity and anecdotal nature of the tales he tells lies a very sharply-honed novelist's mind. There is a design behind the loosely linked series of stories through which the principal narrator Charles O'Brien sets out his own life story from the 1860s through to the early 20th century. Charles acts as a witness to the way in which the land was restored to the dispossessed and embittered native population and comes in contact, often quite innocently, with major figures of the period such as Parnell, Oscar Wilde, Yeats and Shaw. Other voices interject from time to time to indicate that Charles for all his confidence in his own eloquence and grasp of the situation surrounding him often doesn't quite understand how others see him nor what is really taking place in the country. This is wonderfully well done and constitutes a fresh and rather variegated look at a period which most of us in Ireland only know from textbooks. One of the most devastating and politically incorrect and possibly quite true themes that continually comes through (flying in the face of the pieties of the modern Republic) is that there is such an enormous disparity between native Catholics and settler Protestants, both of whom passionately love the land, that there is practically no hope whatsoever of the two tribes or even species -- it goes way beyond simple things such as religious differences -- ever being able to comprehend one another. And all this is done indirectly through anecdote and story in such a familiar idiom for those of us who were born and live or have lived on this island that it brings me back to the title for this review: familiarity shading into amazement!

I will definitely try another of his books.

What does Frank Delaney bring to the story that you wouldn’t experience if you just read the book?

His voice brought the story to life and I felt like I would like to go there to Tipperary!

I found the story to be interesting and enjoyable. I loved the characters and the history.

interesting to found out more about my ancestry, but a little dry, I imagine that's how they were

the reading by the author makes this a truly enjoyable listening experience! He ought to have done voice acting, as well as write!

The combination of a love story and the history of the Irish war for independence was genius. I have read other Irish historical novels but none captivated me the way this one did. I could listen to Frank Delaney’s narration all day. His voice and accent are wonderful.

After finishing this book decided I will re-“read” it. So much will even more interesting, knowing the ending.

insightful and deep it gives a, broad history while holding your attention to the core of the story.

I enjoyed this book immensely. I love that the author reads it and does such a wonderful job. I will listen to more books by this author.