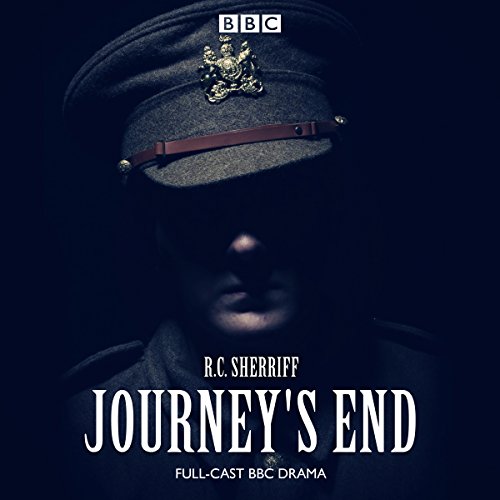 Journey's End is an unflinching vision of life in the tranches towards the end of the First World War.

The play opens in a dugout in the trenches in France. Raleigh, a new 18-year-old officer fresh out of school, joins the besieged company of his friend and hero Stanhope. But when he arrives in the trenches, he finds Stanhope dramatically changed.

Bonus content: this BBC radio release includes The Man From Esher and His Theatre of War, a 30 minute documentary about R C Sherriff and the story behind Journey’s End.

Journey's End was an instant stage success in 1928 (starring Laurence Olivier) and remains a remarkable antiwar classic, regularly revived in theatres. A film was released in February 2018, starring Sam Claflin (The Hunger Games, Me Before You) as Stanhope and Asa Butterfield (Hugo) as Raleigh, along with Paul Bettany, Toby Jones and Tom Sturridge.

What listeners say about Journey's End

I’d wager the actors and director know nothing about conflict (except in the green room).

This is the BBC breakfast news telling one of the defining stories of a generation.

One of the Greatest Plays about the Great War

Journey’s End is one of the greatest plays about the Great War. Set from 18-21 July 1918, the play is about how officers coped with the stresses of trench warfare. The audience sees how the war shapes the personalities of the officers in different ways.

Generally, the dramatization is good. It is disappointing that there is no dramatization of the raid, and instead there are just sound effects of trench warfare which are so general as to give no indications as to what is happening. I think a better actor should have played Trotter.