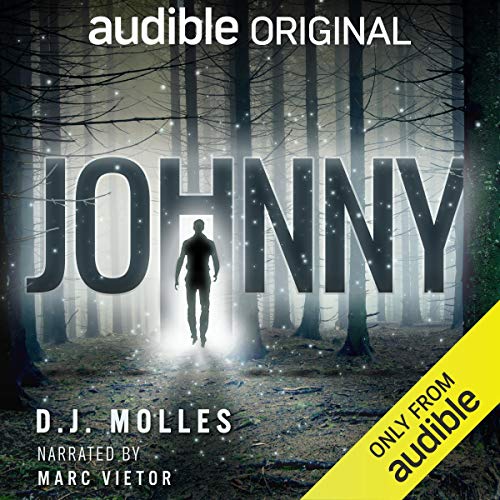 Aubrey St. James is in trouble. She's locked in a cell at a government black site. She doesn't know where that site is or how the hell she got there. But she knows that it has something to do with the stranger she rescued from the river. Someone - or something - called Johnny.

Saul Tarson knows that the thing he's locked up is dangerous, because it left a trail of six dead cops in its wake, all killed in a way that defies explanation. It is Saul's sworn duty to get to the truth about Johnny before more people die - a lot more.

All Johnny wants is to return home. But he has a mission to fulfill first. And what he does in the next 20 hours will either save mankind - or bring it to its knees.

"Marc Vietor narrates Johnny's earthly adventure in a deep, sombre tone reminiscent of the voice-overs of televised stories of extraterrestrials....his portrayals of the resigned alien and the berserk agent make this alien breakaway compelling listening." (AudioFile)

What listeners say about Johnny

i saw the book was new to Audible and didnt have any reviews, so thought I would give it a go and see.
I actually really enjoyed the story. and it raised some interesting ideas about communication and lies, which I've enjoyed mulling over.
well worth a listen.

Very interesting story. The book starts off with death and water boarding and only gets better. As you learn who the characters are and watch them all struggle to survive and figure out what is going on and who this Johnny really is. My only frustration was the characters taking so long to figure out the obvious but that is a slight issue that is lost in the excellent story and the end. The end is full of emotion and hope and will leave you thinking! DJ Molles remains one of my favorite authors and narration was great!!

Ok, OK know thats a strange heading. But think about this book. If aliens come to earth, will they be saviours or invading colonists? Have to read it to find out. Things change time and time again. Very good book turns things and what we believe on its ear. Give it a try. Thought provoking amid very solid narration. Fine Audible production.

Essentially this is about an explorer coming and clashing with our world. I rated it lower because the Johnny and his civilization were an interesting concept but also came across as stunningly naive. Differences drive story of course but it was harder to believe such people with such technology would act so naively before getting involved. Ultimately he does what he came to do though even if it was in a sloppy way. Still a good story about people being thrust into something they don't understand. The protagonist government agents were a little hyperbolic as well but played the role they needed for the story in the end.

If you’re looking for a fast paced book this isn’t it. Although I finished it I could have stopped any time and not regretted it. The narrator is what kept me listening.

What an amazing book!

I wouldn't normally choose this book based on the premise, but I would read anything DJ Molles writes! I enjoyed this book very much. I feel like I will pick up on even more the second time I listen to it too. As a guy that doesn't read too much SciFi (outside of the zombie/plague/dystopia genre), this reminds me of an Robert Heinlein novel, upgraded by DJ Molles' incredible descriptive abilities. I highly recommend this book/audiobook.

And for those die hard Christian Rummel fans, you will not be disappointed! Marc Vietor does a great job!

Interesting idea and performed expertly, but moves at a snail’s pace with a silly and unsatisfying ending.

I don't know how I manage to finish this book. it had to be one of the worst books I have ever struggled through. The whole book was about "Johnny" the alien trying to get back to his one and only. while being chased by a psychotic and sadistic, military guy. who wants nothing more than to kill him. As far as the rest of the book goes. I couldn't tell you. It was very disjointed and redundant, at the same time not really letting you know what was going on. I would ask for my money back but I listened to the whole thing and I don't like to return books that I actually listened to. No matter how bad they were. The narrator was ok, however the material was so boring it was impossible for him to do anything to improve it. Seriously, don't waste your credit.

Didnt know what to expect on this stand alone novel by Molles. It is unlike anything I have read or listened to by this author. (Possible Spoilers) But I boght it because he is a good writer. And while it was different and started slow it also began very fast as we find a woman being held against her will questioned by an agent of AGA(Another Government Agency), the man questioning her is determined to break her even though she is not his target. That one lies in a cell elsewhere; he is a traveler come to give us a gift. They are connected and he will go through any length and means to get the answers he wants. But no one will listen to the truth and the agent and scientists involved only want to interroate and dissect him. They will not go beyond the fear of the unknown yet the thrill of it is intoxicating. One wants truth, his truth, no other will do, the others want knowledge and accolades yet all hearing only what they want to hear and believe is the truth, their truth.
Now the woman, Audrey and the Traveler, Johnny, must somehow escape to get him back to his world before it is too late; either the doorway he walked through will disappear or he will not be the same as when he arrived unable to continue.
It is a fast timeline they must meet and all the while being hunted by the one agent that no matter what he hears or knows the real truth, cannot afford to let the traveler escape.
It's really good if you like the Sci-Fi ET angle with a bit of Close Encounters of the Third Kind. I dare say this would make a great movie of the week or an Original NetFlix or Amazon Prime Movie. ***Story is in Audbile only***

Loved the new story, very interesting ideas on "visitors " Liked the new narrator, the multiple narrators were a cool change as well.

It took a bit to get going but I enjoyed the book overall. Very well written and good narration.