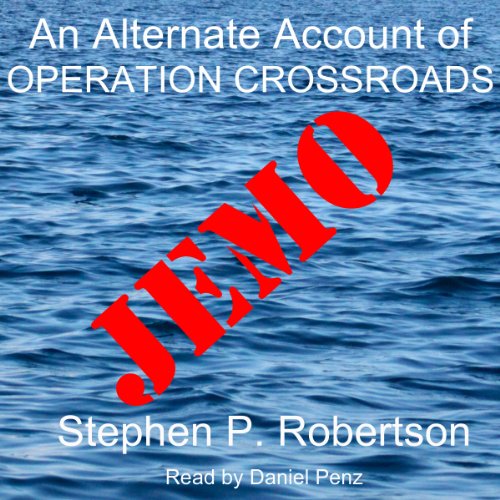 A Fictional Account of the Baker Blast, Operation Crossroads...and of Those Left Behind
By: Stephen P. Robertson
Narrated by: Daniel Penz
Length: 2 hrs and 24 mins
Categories: Fiction, Historical
5 out of 5 stars 5.0 (5 ratings)

The United States conducted highly classified atomic testing in the Marshall Islands. One of the ships used in the mock up fleet was a captured Japanese Battleship, the Nagato. These ships were equipped with an array of equipment, from cameras to Geiger counters, as well as various farm animals. These tests were intended to determine "Fleet Survivability" in the face of a thermonuclear implosion. Unfortunately, no one fully understood, or could even begin to imagine, the utter devastation about to be unleashed...or the consequences!

If listening to this book doesn't leave you with a profound sense of distrust of the military and convinced of the need for more civilian controls, it will at least cause you to doubt the processes and laws that permit such activities and decisions to be made without even lip service to democratic principles. This book is a must-have for every thoughtful American.

This thoroughly researched and documented book chronicles one of the most under-reported stories of our nuclear past. Utilizing declassified records and a wide assortment of sources, Stephen P. Robertson offers unique insights into the crude mentality of the post-war period, where our sailors and soldiers became victims of the burgeoning nuclear hysteria.

The author has given us an astounding account of the atomic tests on Bikini Atoll. This book goes into fine detail about the preparations for Operation Crossroads, the first atomic tests at Bikini. It goes into great depth, describing the mismanagement of America's atomic policies toward the Marshallese.

The complete, moving story of the atomic and nuclear tests. Book gives a human touch to those lives affected and destroyed. The politics, the military, the science, all on a one-way course to experimentation towards oblivion. Tremendous book.

Nuclear testing in the Marshall Islands, for the most part, has been censured by the US govt. It is a dirty secret we all wish would go away, and a circumstance the planet wished never happened. This book is a great tool for anyone interested in events: nuclear regarding the US history of events and testing. It is a great book, and the saga of this operation continues today, just look up the nuclear claims tribunal and see what kind of topics they have been discussing over the years. Good Book!

Alternate histories can sometimes come across as unbelievable but this was not the case with Jemo. Before reading the book I knew a bit about Operation Crossroads and the Baker Test but didn't really know all the details so this compelled me to look into the subject further. Having read more about it the book has become even more believable.

The author skillfully used a journal format to fully explore the fear, pain, and confusion these men experienced. It all felt horribly genuine for the listener.

The entire novella was filled with so much emotion that it was almost difficult to listen to at times. And the heartbreaking ending left me tearing up.

The narrator, Daniel Penz, did a fantastic job with the audiobook edition. His excellent performance really showcased the emotions of the sailors and their struggle and made an already moving book heart wrenching for the listener.

I highly recommend this very well done novella. It has truly changed the way I view the subject.