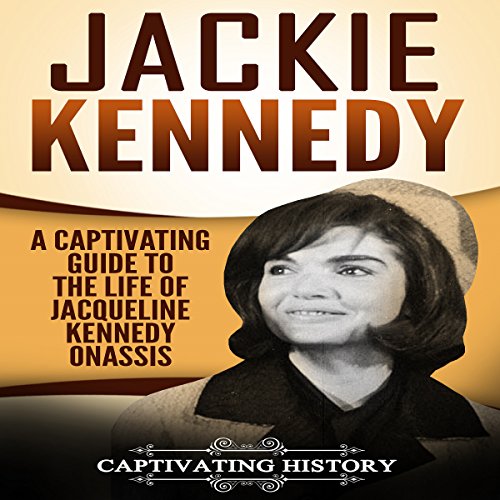 Jackie Kennedy: A Captivating Guide to the Life of Jacqueline Kennedy Onassis

Jackie Kennedy: A Captivating Guide to the Life of Jacqueline Kennedy Onassis

Without a doubt, the name Jacqueline Kennedy draws multiple thoughts to mind. She is, perhaps, most well-known for her service as the first lady of the United States when her husband, John F. Kennedy, took office as the president, and for her role in restoring the White House. Then, of course, other people remember Jackie for her role in the fashion industry, particularly her pink Chanel suit and matching pillbox hat, which became symbols of her husband's assassination. Jackie is so renowned and beloved that she ranks as one of the most popular first ladies. In fact, Jacqueline was named, in 1999, in Gallup's list of Most Admired Men and Women in 20th century America. While she made major impacts on the White House, Jackie was much more than her title of first lady.

Some of the topics covered in this audiobook include:

What listeners say about Jackie Kennedy: A Captivating Guide to the Life of Jacqueline Kennedy Onassis

I bought this audiobook for my son.

I bought this audiobook for my son. He told me that he wants to know more about Jackie Kennedy. And this book is very helpful for him. He listened to it everyday. Highly recommended!

Wondered about many things after the President's killing. Was surprised at the fear Mrs. Kennedy had for herself and her children.

The book answered many questions I had.

I would recommend this book to anyone.

I enjoyed this very fact based account of Mrs. Kennedy-Onasis' life. No gossip or innuendo. Extremely engaging and fascinating. Well recommended.

I enjoyed it very much.

Enjoyed this version of Jackie. The details are explained well and the author's belief that Jackie suffered with PTSD following Dallas is well-supported.

So very sad,but beautifully written and narrated. Vividly illustrates the crippling effect of PTSD on one of our great first ladies

Learned a lot from this audible.

I thought it was very interesting, I learned a lot about someone I always admired.
There was a lot we never knew about her.

Enjoyed all of it.

I enjoyed this audio book.I was not aware of certain events and found this to be a very intriguing book more than I expected.

Very interesting as another Untold Story unfolds about a famous womenizer that the information was buried while in office.

I have long felt that Jacqueline Bouvier Kennedy was truly a First Lady. She had grace, poise, personal dignity and was a cautious, caring
individual filling a difficult role; the wife of the president of the United States. She did wonders to the White House and today it again shines as a historical masterpiece

Loved this book. Love the Kennedys

Wonderful to read about the inside of the Kennedys lives. Thank you for sharing your memories. I loved this book - so interesting to read of her abject poverty in Ireland and her exciting life serving Madam Kennedy Onassis. She is a gifted storyteller and I would love to read another memoir by this author!!

What a wonderful audile. It is a must for all to enjoy. I’m so delighted the author shared part of her life and the life of her mother with the public. I hope her message is understood and others will encourage their children to learn and live a comprehensive life.

I loved this book and listened to it so intensely. I don't believe there was a section that was boring. The great representations of the characters in the book allowed a great insight into Jakie's life. You must listen to it!

Amazing this was a great read!! I had to listen to all in on sitting. Even if you are not into history, you will love this book because this personality is loving and interesting. I have never listened to a book like this before, but I was so excited about this book and will listen to it again and agian.

Best book I have listen in a while! I loved reading Captivating History's story of coming to America and sharing her fly on the wall experiences as Jackie Kennedy's personal assistant. Loved it.

Like a Wikipedia page. Not any insider stories, just plain accounts of Jackie’s life that can be found on the internet.

Did anyone actually listen to this before publishing it? There is actually a moment when you hear the narrator clear his throat and sound out words. Difficult to follow, as the years jumped around and were not consecutive. I hope there are better versions of Jackie's history out there.

She was facinating lady and icon for us as well.

Pleasing profile with several particulars not formerly available about Jackie Kennedy. Fetching section with some excessive intuitions into life as a politician's wife, Kennedy family member, American sign and a lady of her time. She was an amazing female, recommended definitely.

She was queen and loving personality.

Indeed like listening to it, just finished, but will come back and listen to it again. She was an empress and she was a backstreet cat. Wouldn't want my man around her, wouldn't happen nevertheless since he's not a tycoon. She was very straight according to the author and I admit it.

I enjoyed the book

I wasn’t able to off the player while listening to this book. I truly loved it. I don't know if I can trust the whole thing but it finished for some excellent listening.
My friend first listens to it and made for some good discussions with me. He actually convinced me to download this audible and it is indeed fantastic book.