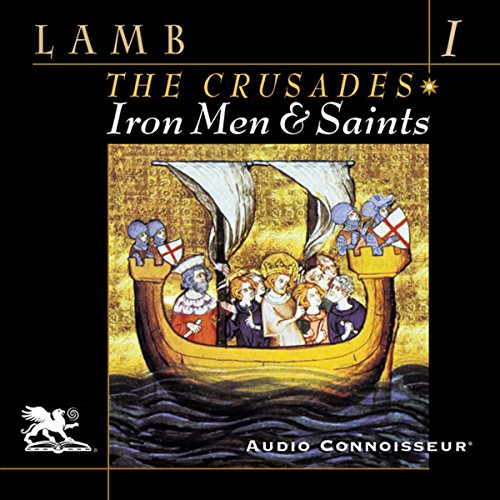 By: Harold Lamb
Narrated by: Charlton Griffin
Try for £0.00

The first crusade of 1096 unleashed a wave of impassioned, personally felt, deeply pious Christian fury that was expressed in a mass movement centered in France and spreading to other European kingdoms, including Flanders, German speaking principalities, and Italy. Master historian Harold Lamb tells the incredible story of how Pope Urban II fanned the sparks of Christian anger into a mighty conflagration of righteous indignation with his speech of 1095 in Clermont. It was a speech that would occupy the hearts and minds of Europeans for over 200 years.

Tens of thousands of peasants, both men and women, simply left their fields and workshops and joined knights and monks on a journey to take back holy Jerusalem from the infidel Muslims. A river of humanity, often hostile and destructive, flowed across Europe and into Byzantium and Asia. Led by baronial leaders like Godfrey of Bouillon, Baldwin of Flanders, Raymond of Toulouse, Robert of Normandy, and the mighty Bohemond of Taranto, their confrontation with Islamic armies would soon follow. The results of those armed clashes produced some of the most amazing stories you will ever hear.

Be sure to listen to Volume 2 in this series by Harold Lamb: The Flame of Islam.

What listeners say about Iron Men and Saints

An accurate and true retelling of the reasons for the crusades and the early christian knights who fought them.

A Real and Accurate telling of the first crusade. CAUTION...Those who have been indoctrinated with the historical revisionism that plaques our historical teaching in colleges and universities will not like this true and accurate retelling of the causes... life and struggles of the christians and their reasons for launching the crusades.

This book written in1930 before socialist and communist philosophies took control of what we teach our young people...is sure to not be given the credit it deserves by them and those unwittingly educated by them. It is however one of the BEST and accurate works on the topic.

Well, I hold a Masters degree from Cambridge..so yea I am educated..not necessarily indoctrinated, and I enjoy speaking up against the historical revisionists and showing their foolish interpretations and schemes to discredit Western Civilization.

In my years of teaching..I still hold this book to be the best telling of the true story of the crusades and their battle against the spears of Islam. Understand....we in the West have forgotten that there is a system of government and tyrannical belief that Islam's has to conquer the world..but especially Europe and America. They are...have been for centuries at war with us. We just don't realize how serious and current the danger from Islam is...

The Crusades - By a Talented Writer

This Book is Narrated by Charlton Griffin, who has is own style. It's different, but it's cool. Like an energetic and awesome old man. Plus, there is music in the key chapter transitions.

There is much that this book explains that no movie, no documentary, and no political work ever covers. The west was in mortal and existential danger before the Crusades. The brave people that fought for Christianity are remembered as the conquerors of Jerusalem, but they did much more. They suffered more like the Patriots at Valley Forge, they scaled mountains, they beat numerically superior forces, and they suffered tremendous loses.

Additionally, the trek from Central Europe to Jerusalem was on-foot, without support, and full of extreme danger. What they accomplished was an incredible accomplishment.

Dated but with a listen

This book was originally written in 1930. Some of the terminology and tone is very dated and the book is uncritical of its sources. Nevertheless, it is entertaining and provides a basic framework for the first crusade. It only briefly goes over the next three. The narrator is excellent and makes the book worth listening to.

The narration was impeccable, the story kept me intrigued. Interesting facts of history I only wished there had been more.

The book was interesting although a little dry in some parts, the narration as always from Charlton Griffin was first rate.

Not bad but really dated

This is the first book by Lamb i had listened too and while it tells a compelling story, half the information is really dated. Lamb mentions that only the strongest warriors could even swing a long-sword. Long-swords are not that heavy and even a child could lift one. He then also speaks of chivalry which is anachronistic to say the least as that concept had not developed in the period of the first crusade. I don't even want to get started on the concept of luxurious eastern despotism. If you know nothing about the Crusades and are looking for a starter by all means this is a great resource as long as you take it with a grain of salt, However; if you already have a bit a knowledge on the area stay away.

What other book might you compare Iron Men and Saints to and why?

"The Crusades Through Arab Eyes" is a better telling and more factual than Lambs book and i would highly recommend it.

Would you listen to another book narrated by Charlton Griffin?

He regularly massacres foreign names, but honestly hes a great narrator if you can get passed that one thing.

This audio book made me speculate how wonderful it would have been if my school history teachers had related a historical period so richly. I enjoyed the sometimes subtle jabs at man's efforts to say, and get men to trust, that they are the masters of their fate. Greatly entertaining!

What was one of the most memorable moments of Iron Men and Saints?

the stories of the first crusades as they raped and sacked so many European communities en route to the "HOLY land"..... to rid it of godless people...

Was Iron Men and Saints worth the listening time?

I enjoyed the story and the feeling of a tale around a campfire infuses this performance for me - not sure how factually accurate it is - of course I will have to follow up.

Its just campy....and I still enjoyed it

This was entertaining and interesting to listen to. I felt that I was transported to a different world. Lamb is one of those authors who can bring the past to life with his vivid descriptions of people, places, and events. The narrator had a rich, resonant voice and was a pleasure to listen to. Highly recommended.

this is precisely the first crusade, the other crusades are sumarrized at the end. the narrator is droning but that is relaxing to me