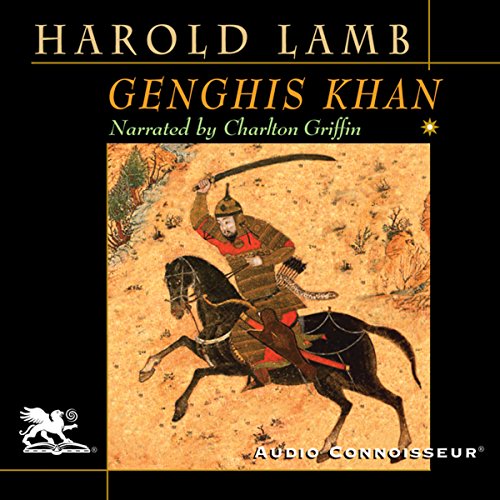 By: Harold Lamb
Narrated by: Charlton Griffin
Try for £0.00

In the early 13th century, a simple nomad chieftain managed to cobble together a powerful kingdom in the highlands of northern Asia, which was subsequently to challenge the greatest powers of the day. He was triumphant in all directions. This leader was Timujin, whose name meant "Iron Man". He became Genghis Khan, "Universal Ruler", the greatest conqueror ever known - a warrior feared from the British Isles to the tip of the Korean peninsula.

Known by many names, including "The Scourge of God", Genghis Khan sent his Mongol armies ranging over most of the Eurasian land mass. He first sent his hordes of cavalry crashing into China, then turned on the ancient Persian Shah before smashing the Muslim Caliphate. He left smoldering ruins and depopulated nations in his tracks. Instead of measuring his progress in miles, we measure it today by degrees of latitude and longitude.

The tough, barbaric Mongolians were welded into the finest, most highly disciplined force of mobile fighting men assembled up to that period. Mongol leadership, unlike those of other armies, was based strictly on merit. Incompetence was not tolerated among the Khan's generals. The lightning quick movements and encircling tactics of Mongol horsemen baffled their opponents time after time. In fact, under Genghis Khan, they were never defeated. At the Great Khan's death in 1227, there were hardly any worthy opponents left to fight anywhere in the world.

What listeners say about Genghis Khan

This is a fabulous biography. The author beautifully evokes life among the nomads of the Gobi in the 12th and 13th centuries. I felt I had truly come to know this contradictory and elusory person and came to have even greater respect for the sweep and magnificence of his achievements.

I think the book would fire the imagination of any teenage boy with its tales of derring-do and violent heroic clashes, particularly since the Khan was only 13 when he became the ruler of his clan. As for me, I listened as long as I could each time, and was sad when the saga finished.

The reader immediately summons up the glory of days gone by, and even though I though he was a bit too much at the beginning, I quickly came to appreciate that he was telling a tale set in heroic times, and his voice gave a depth to the book that simply reading it might have lacked. Also, I admire his tireless pronounciation of all of the names of the heros and the tribes.

a little weighty, but still worth it

I had trouble finishing this one, but I did. I had purchased this book with no research, so I didn't notice its age. It was only after I got into it, when I realized how weighty the text was, that I went back and researched it to discover when Harold Lamb wrote it--1927. In that perspective, the style makes sense, but anyone like me, used to modern "entertain with science" writing might find it thick.

Still, I'm glad I bought it, as I know have a much better knowledge of an exciting time.

The Greatest man of the last millenium

This audio title is both concise and elaborate in explaining the "apocalypse" of which we call Tartar aka Mongol.

If you want a moderately interesting but unreflective diary of Genghis Khan's life, you will enjoy this book. If you are looking for an interpretation of the historical setting in which Genghis Khan lived or the impact of his life on future events, keep looking.

This is a part of history that I know nothing about. The book is well written and makes the "Mongol Horde" human. I'm currently reading Manchester's book about Douglas MacArthur, American Caesar. MacArthur was a fan of Genghis Khan and his tactics. This book has given a good foundation for understanding MacArthur's admiration. I loved reading about Genghis Kahn stopping in the Delhi area because of the heat and humidity. That man was no fool.

I am more than a bit unqualified to critique this book. Curiosity rather than any scholarly background was the reason for my choice. But, I liked it. The Mongolian words sounded like linguistic acrobatics, but specific name associations were not necessary for me to be absorbed in this narrative of an amazing people.

this is a really good autobiography of Genghis Khan. In a concise manner, the author is able to give you a clear perspective of GK and how he developed his great empire.
The reader is particularly good and makes listening to the book quite agreeable.

This is a great read if you like to learn about history.

Its like the real life story of Conan, if you like bios and war-type strategy, or if you love a great story, this is for you

A story of legendary conquest.
the story inspiring and invigorating and will leave you much informed about the life and death of Genghis Khan.

This narrative was understandable, at least the first seven chapters of the book, but after the Chinese conquest, the subject matter started to lose its focus and went everywhere, I enjoyed the first seven chapter, but grind through the last three. The narrator's monotonous voice did not help lighten up the volume, but overall, this is a tolerable presentation.