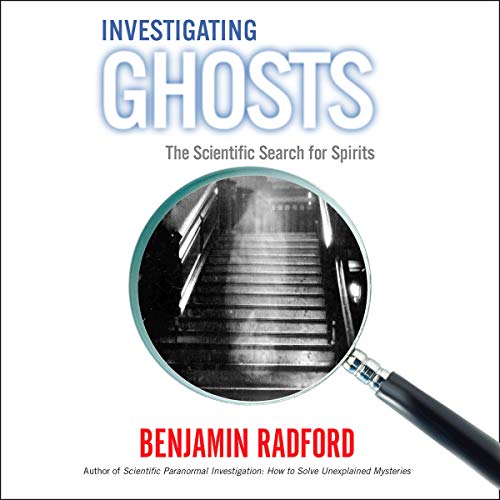 Ghosts have fascinated and haunted us for millennia. They appear in our campfire tales, films, books, and television shows, as well as in our dreams and nightmares. Despite widespread belief in spirits and the popularity of television ghost-hunting shows, scientific evidence for them remains elusive. Investigating Ghosts is the first audiobook to examine the history and techniques of ghost hunting from folkloric, scientific, and sociocultural perspectives.

No mere armchair scholar, author Benjamin Radford's audiobook is based on nearly 20 years of firsthand science-based investigations and research. Investigating Ghosts will entertain and educate skeptics and true believers alike, separating fact from fiction about this timeless mystery.

A serious look at "ghost hunting@

Amid the deluge of tv 'ghost hunters' vying desperately for your attention through cheap titillation and shoddy investigative methods, a few solitary rational voices struggle to be heard.

Radford is one of those voices.

Investigating Ghosts presents a serious look at how to approach an investigation into the paranormal. Radford's scientific approach and even handedness shines through in a series of anecdotes and case descriptions.It's a pleasure to listen to his decades of experiences which Ben weaves with lessons he's learned and hopes to impart.

Never during the prose does it become dry and stuffy despite this serious approach.

This is a delight for skeptics and believers alike, and if you happen to operate a ghost hunting team, whilst it will not deliver you a spook, it will make you a more diligent and accomplished investigator.