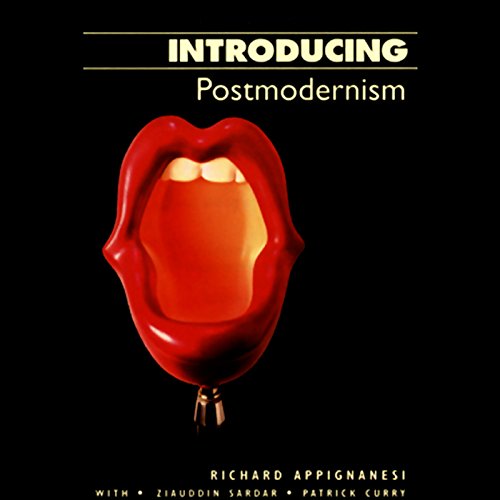 By: Richard Appignanesi
Narrated by: William Roberts
Try for £0.00

What on earth is postmodernism? Here, at last, is the perfect audio guide to the maddeningly enigmatic concept that has been used to describe our cultural condition of the late-20th and early-21st centuries.

Postmodernism claims that "modernity", which grew from the Enlightenment to the Industrial Revolution and Marxism, has collapsed. We now live in an endlessly "contemporary" culture, a virtual world of "hyperreality" containing such strange phenomena as post-Holocaust amnesia, Disneyland, cyberspace, and Fukuyama's proclaimed "end of history".

Richard Appignanesi, author of the best-selling book Introducing Postmodernism, takes the listener on a roller-coaster ride through the key areas of postmodern debate and explains the essentials of structuralism, semiotics, and deconstruction as developed by Foucault, Levi-Strauss, Barthes, Derrida, Lacan, Lyotard, and others. It is a crucial guide for anyone wanting to understand the hall of mirrors that is postmodernism.

"A perfect match of form and content." (Times Educational Supplement)

What listeners say about Introducing Postmodernism

Very disappointing introduction to Postmodernism. Told from the perspective of a married older couple, which takes a walk through a museum, encountering different postmodernist thinkers. The neurotic screaming and stupidity of the lady make it hard to concentrate on the Audiobook. Most of the time the actors are talking with very exaggerated French, German or Russian accents, which are simply annoying. Very childish introduction to Postmodernism.

What seemed to be an intriguing summary of postmodern theory turned out to be a scattered, obnoxious, and unhelpful listen. The audiobook is filled with sound effects and childish attempts at comedy that do not provide any clarification as one might assume. Major postmodern theorists such as Foucault are oversimplified and never explained, which will likely confuse the newcomer to such theory.

The ideas are there, but...

This audiobook touches on many significant ideas and writers, and covers many prominent postmodern works in art, architecture, literature, philosophy,etc.

However, the presentation is awful. The ideas are presented as if the original writers and artists were reading and comenting on their own work. The acting is terrible and the accents--especially the French and German--are terrible, often difficult to understand or just downright annoying.

A little cheesy and a little scatter-brained, but that's the way it goes with Postmodernism. I'm left with wanting to know more and to have a better grasp of what connects it all together.

Too little information and too much entertainment!

I really cant say I learned much. it seemed to have been made for kids. also, the fact that they reflected the woman as a dumb person whose husband knows and has to explain everything was really annoying and insulting!

It did cover the topic broadly

Would you recommend Introducing Postmodernism to your friends? Why or why not?

Probably not. I think there are better intros to this subject area

These questions are stupid. This is a non fiction book!

OK but not great

interesting though difficult to understand start

What made the experience of listening to Introducing Postmodernism the most enjoyable?

It is accurate to the confusion your feel when trying to understand postmodernism.

The desire to overcome the phenomenon which is postmodernism.

Postmodernism really at the root leaves you feeling less and less human in the end even though there are some very good aspects that have taken place because of the concern for others and there plight.

Very entertaining, but only covers the arts and cultural side of postmoderism. I had hoped for more of the philosophy and its effects on society, technology, economics, and politics.

Postmodernism as done by Firesign theater

Some of it, especially the interviews with philosophers and authors, was really good. Unfortunately, this program makes fun of the holocaust, and there was a fairly racist bit too (the part about hip hop). These were not good moments. Also, the parts about the internet are so dated that they are hilarious in hindsight.

A very quick and entering overview of Modernism. Very good performances from the many voice actors. 5/5

No, I got this book to listen to during my commute but this honestly was not what I was expecting.

The different characters speaking made this book really hard to listen to. To tell you the truth I never finished listening to it because I became slightly annoyed at the acting taking place when they were discussing art history.

Did Introducing Postmodernism inspire you to do anything?