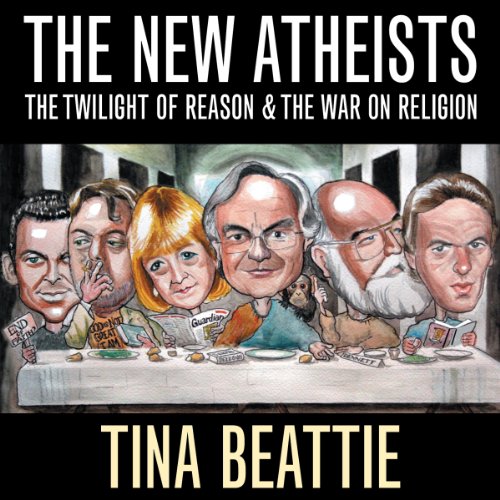 The Twilight of Reason and the War on Religion
By: Tina Beattie
Narrated by: Lynsey Frost
Length: 5 hrs and 40 mins
Categories: Religion & Spirituality, Non-fiction
4.5 out of 5 stars 4.3 (3 ratings)

From its gradual decline during the latter part of the twentieth century, religion has been catapulted back into public consciousness, not least by acts of violence, extremism and various forms of fundamentalism. In this lively and provocative contribution to the debate the leading British feminist theologian, Tina Beattie, argues that the threat of religious fanaticism is mirrored by a no less virulent and ignorant secular fanaticism which has taken hold of the intellectual classes in Britain and America.

Its High Priest is Richard Dawkins, author of The God Delusion, but its disciples and acolytes include well-known public figures such as philosophers Sam Harris, Daniel Dennett and A C Grayling, journalists Christopher Hitchens and Polly Toynbee, and novelists Martin Amis and Ian McEwan. Theologians such as Alister McGrath and Keith Ward have defended the rationality of Christian beliefs about God, but both sides neglect wider questions about faith, science, power and justice in a postmodern world, which impinge deeply on all our lives.

The New Atheists calls for a more wide-ranging and creative dialogue across religious and cultural boundaries. It will intrigue every open-minded reader, believer or non-believer.

whether or not the bias that frost reads into the text (dawkins in an awful pompous tone, supporting theologians read earnestly and enthusiastically) was done deliberately, it easily shapes a first listen. some of the pronunciations of the names were jarring and took a moment to figure out who was being discussed (neechy/kamuss etc.) but generally an enjoyable read of an accessible book. listened to in a day and that’s only half because i need to write an essay on it soon

I'm Very Glad To Have Found This Audiobook

I recently heard of Tina Beattie via her tension with the Vatican that I saw written about on a blog somewhere.

And personally, I always really enjoy reading different authors that the Vatican wants to censure, and as a believing Catholic, I'm always looking for good Catholic literature to read, and often looking up what Feminist literature the admins are trying to stamp out usually provides for great, great and deep and insightful reading that often brings me closer to God.

And that's what this book did. Really, this book was a total surprise. I had no idea that there was an audible edition, and as soon as I saw it I bought it and read it in a couple days.

There is much, much more here than a treatment of The New Atheists and Tina Beattie's thoughts on that camp. If you want to sum this up in a few logical-esque sentences, this is more of an indictment of fundamentalism and it's use in corrupting both science and religion.

She also spends some time arguing against the use of rhetoric and arguments in the dialogue between science and religion and suggests instead that art is a much better space for our mutual worlds to dialogue in.

And the narrator does a very, very good job. She made the book read well and I think did a very good and clear job.

This book was an absolute joy to read.

of the obvious problem with the "New Atheists," led by their messiah (one has to love the irony in the book's cover) Richard Dawkins, namely, that their entire approach is based on two false assumptions: 1) all theists are radical, fundamentalist, literalist nutjobs, and 2) science and theology are naturally, diametrically opposed to one another. She also makes the very obvious point that the spurious battle waged by the not so fab four Huxley wannabes (Dawkins, Dennett, Harris and the dearly departed Hitchins--and one might throw in the late coming Lawrence Krasse as the fifth Beatle, I suppose): it's much more political than scientific. Beattie cuts through the cosmic bologna here and shows that science and religion are not the mortal enemies Dawkins and company pretend in order to force their agenda.