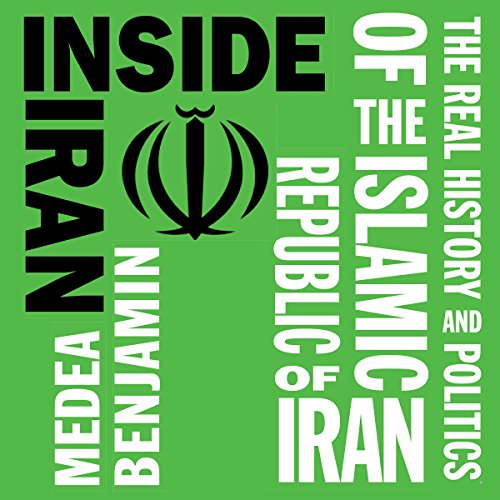 The Real History and Politics of the Islamic Republic of Iran
By: Medea Benjamin
Narrated by: Rosemary Benson
Length: 7 hrs and 47 mins
Categories: History, Political
5 out of 5 stars 5.0 (2 ratings)

US relations with Iran have been fraught for decades, but, under the Trump Administration, tensions are rising to startling levels. Medea Benjamin, one of the best-known 21st century activists, offers the incredible history of how a probable alliance became a bitter antagonism in this accessible and fascinating story.

In 1979, the Iranian Revolution brought a full-scale theocracy to the 80 million inhabitants of the Middle East's second largest country. The rule of the ayatollahs opened the door to Islamic fundamentalism. In the decades since, bitter relations have persisted between the US and Iran. Yet how is it that Iran has become the primary target of American antagonism over nations like Saudi Arabia, whose appalling human rights violations fail to depose it as one of America's closest allies in the Middle East?

In the first general-audience book on the subject, Medea Benjamin elucidates the mystery behind this complex relationship, recounting the country's history from the pre-colonial period to its emergence as the one nation that Democrats and Republicans alike can unite in denouncing. Benjamin has traveled several times to Iran and uses her firsthand experiences with politicians, activists, and everyday citizens to provide a deeper understanding of the complexities of Iranian society. Tackling common misconceptions about Iran's system of government, its religiosity, and its citizens' way of life, Benjamin makes short work of the inflammatory rhetoric surrounding US-Iranian relations and presents a realistic and hopeful case for the two nations' future.

Well I certainly do not doubt the author's sincerity but the work is as deep as a mud puddle. In parts of the book the author takes an orientalist approach and though the book covers many topics, it's all an awkward combination of a knee-jerk dove approach towards anything involving the US together with a belief that Iran and Iranians are the upper and upper middle class living in those North Tehran suburbs. Taking the author's views into account I think there are legitimate argument's to be made from her point of view but she stays with the rhetoric and never gets beyond it. If you're looking for anything remotely serious on understanding Iran, there is a lot better out there.