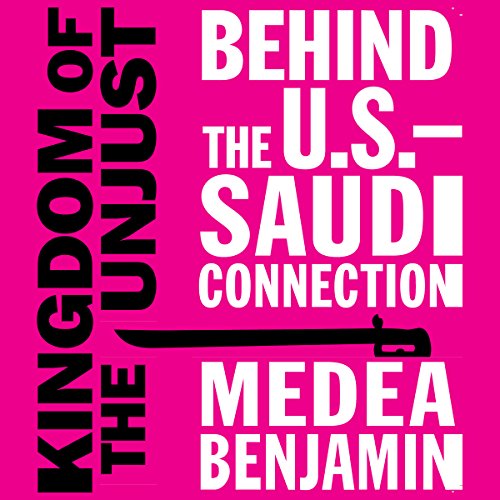 Kingdom of the Unjust

By: Medea Benjamin
Narrated by: Margy Stein
Try for £0.00

The cofounder of Code Pink has become famous for fearlessly tackling head-on subjects most of us studiously avoid. Sometimes, she does so in person - as during President Obama's speech at the National Defense University, or during a reception for drone manufacturers and members of Congress, or in Cairo, where she was assaulted by police.

Here, she's researching the sinister nature of the relationship between the US and Saudi Arabia. In seven succinct chapters followed by a meditation on prospects for change, Medea Benjamin - cited by the LA Times as “[O]ne of the high-profile members of the peace movement” - shines a light on one of the most perplexing elements of American foreign policy.

What is the origin of this strange alliance between two countries that seemingly have very little in common? Why does it persist, and what are its consequences? Why, over a period of decades and across various presidential administrations, has the US consistently supported a regime shown time and again to be one of the most powerful forces working against American interests?

Saudi Arabia is perhaps the single most important source of funds for terrorists worldwide, promoting an extreme interpretation of Islam along with anti-Western sentiment while brutally repressing nonviolent dissidents at home.

With extremism spreading across the globe, a reduced US need for Saudi oil, and a thawing of US relations with Iran, the time is right for a re-evaluation of our close ties with the Saudi regime.

What listeners say about Kingdom of the Unjust