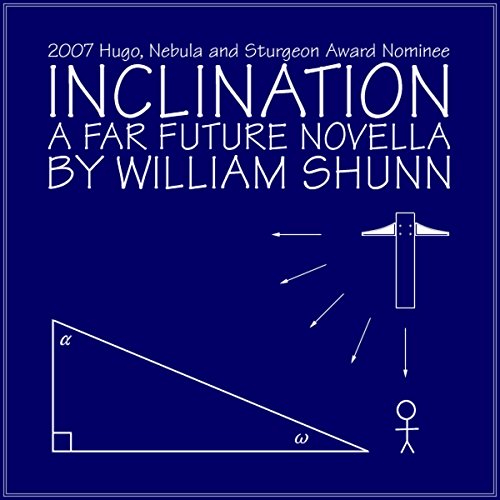 Jude Plane is just a typical teenage boy - for a boy who lives in a cloistered religious enclave on a giant space station, that is. Jude's faith forbids him from using advanced technology, but that resolve will be put to the test when his father sends him to work outside the enclave, unloading freight at the station's hub. There Jude will make friends stranger than any he's known, and find himself confronted by choices he couldn't have imagined just days earlier. But will he solve the biggest mystery of all: the question of who he really is?
©2007 William Shunn (P)2007 William Shunn
Anthologies & Short Stories
Show More Show Less

What listeners say about Inclination

An interesting story set in a future world, deftly revealed through the eyes of the young, first person protagonist. We follow his emergence from the protective shell of his religious upbringing into the wider world of a space station of some kind, populated with all manner of interesting characters, and on through his growth in awareness of what exactly he has been sheltered from, and finally on to a satisfying conclusion.

The production quality was quite good as well, with short refrains of mood music separating the chapters.

As humans continue to progress in knowledge, we will continue to stumble over culture. In a way, this story is a tragedy, echoing current conditions despite amazing scientific advances, but here we are enjoying a piece of literature, but also endowing upon ourselves the power of prophecy; we need not repeat history. The author integrates actual religious practice in another time and place, and also encourages us to ask questions.

THE MASTER BUILDER
I read this several years ago and it is stuck in my mind. It was in one of Asimov's magazines in 2006 and then included in Rich Horton's SCIENCE FICTION, THE BEST OF THE YEAR 2007 Edition.

THE WRECKER
The story takes place on a space station and is in the far future. There are two million people on the space station with different religions and different ways of living and looking at life. The main character is very religious and looks at most of the people outside his guild as heathens. He feels they are influenced by The Wrecker (Satan), they do not follow THE MANUEL (bible). THE MASTER BUILDER is God. The character is forced into parts of the space station to work and make money for his guild. The OUTSIDERS have changed their bodies by adding extra parts, or less parts, or hands for feet, etc. One guy has skin that is either blue or green according on the occasion.

The narrator is the author. He is not bad, just not professional. He does not ruin the story, just does not help it.