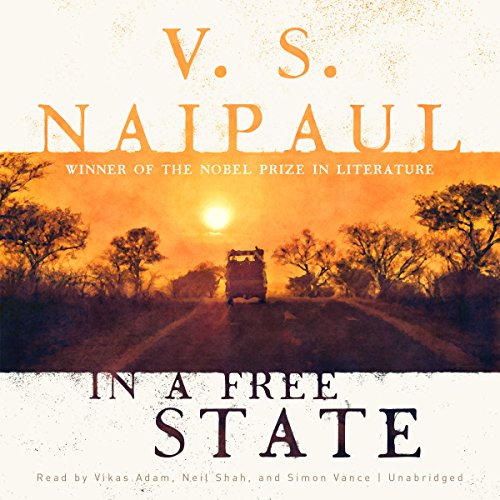 In a Free State

No writer has rendered our boundaryless, postcolonial world more acutely or prophetically than V. S. Naipaul, or given its upheavals such a hauntingly human face. A perfect case in point is this riveting novel, a masterful and stylishly rendered narrative of emigration, dislocation, and dread, accompanied by four supporting narratives.

On a road trip through Africa, two English people - Bobby, a civil servant with a guilty appetite for African boys; and Linda, a supercilious "compound wife" - are driving back to their enclave after a stay in the capital. But in between lies the landscape of an unnamed country whose squalor and ethnic bloodletting suggest Idi Amin's Uganda. And the farther Naipaul's protagonists travel into it, the more they find themselves crossing the line that separates privileged outsiders from horrified victims. Alongside this Conradian tour de force are four incisive portraits of men seeking liberation far from home.

By turns funny and terrifying, sorrowful and unsparing, In a Free State is Naipaul at his best.

What listeners say about In a Free State

This is a wonderful book. It is really a novella plus a set of shorter stories, each of which deals with some aspect of immigration or expatriate life. The novella is set in post-colonial Africa and describes a car journey taken by two Brits from the capital city back to their compound in the African countryside. Their privileged lives and their sarcastic, racist, arrogant attitudes towards African people (the word savages is,shockingly, used) are portrayed in wonderful prose.

The story is shocking in its content and language; some of this is due to the fact that it was written in1971 when attitudes were different. But the novel is as relevant today as it was back then; the world has not moved on, in some respects.

The other stories concern immigration, the dislocation that can be experienced when living in a different culture and the kind of rampant bullying and discrimination that immigrants can experience.

Overall, a thought-provoking book that has made me think hard about a lot of things.

struggled to tie the beginning to the middle to the end. didn't like it.

This is a biased review. I love Naipaul and his style of writing, His books are so beautifully threaded, they are impossible to put down. Of course this offering was the 1971 Booker prize winner. As many will know, there was controversy in the selection that year from the committee with many shenanigans. But the author and book won anyways.

The story – well 5 of them actually, are all wonderful. The first and last being a travelogue of sorts with the first leaving a bitter taste due to its subject matter of nauseating bullying. In between are some captivating stories that illuminate the pen strokes of Naipaul. Most revel in the novella that captures an automobile ride of two British nationals across the African plane. Some say in Uganda. I myself preferred the hilariously funny “One Out of Many” short story. In it, a backward Indian servant named Santosh is brought by plane to the USA by his employer with ridiculous results. There is also the short story of two Trinidadian Indian brothers who end up in London, suffering many immigrant disappointments.

This book is unlike any other from the author. Yet each story is vintage Naipaul. Loved them all.

A Nobel prize winner. Do I have to say more. The narration is musical and a pleasure to hear.

Naipaul’s writing has always been to me, vivid. With appropriate accents in the narration, the story comes to life. The third story with only 2 characters, is an unending discourse on landscapes and “feelings” that make it palpable and more interesting.

Yes it is three different stories. Don’t try connecting the dots- they are 3 different tastes of the mastery of VS Naipaul.

Naipaul's brilliance is in the capturing of moments in the most simplistic manner. In this work the Nobel laureate takes us on a long heart warming ride through moments in different personalities, from diverse free States of perceptions.

There are 3 stories, 3 Settings, 3 Protagonists as told by 3 narrators. They are not connected in any way, have no real plot that can be defined & no moral or point. What ever Naipaul was trying to convey was completely lost on this reader / listener.
Don’t waste your time or money.

An other masterfully written and narrated book.
There are a series of short stories, each completely different and thought provoking.
I became a fan of V.S. Naipaul, thanks to the “included” books, JK

This is a series of heartbreaking, intimately rendered separate short stories, dealing with the savagery with which the human species can treat one another. This brilliant author has created such vivid characters, that I feel as if I have just had dinner with each of them. It is the thought-provokingly timeless story of the oppressed, the unsung immigrant, the need to be seen and appreciated as a valuable citizen in this shared world. The narrator is simply magnificent.