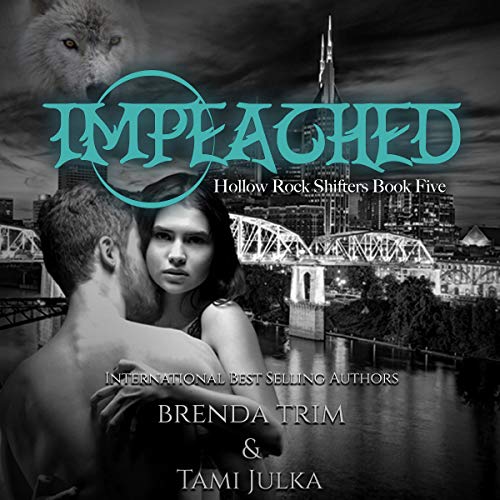 By: Brenda Trim,Tami Julka
Narrated by: Cliff Bergen
Try for £0.00

Bart Smith, governor of Tennessee, has never cared for shifters. He sees them as violent and unpredictable. So long as they abide by the laws set in place and keep to themselves, he's content with the status quo. But when duty calls, and he witnesses the magnitude of torture and abuse, he can no longer ignore the cruel discrimination, and vows that shifters will receive equal rights.

Subsequently, he hires the alluring Erika Pittman, and his world becomes further entwined with the intriguing shifters. Their passion ignites to a scorching level, and they become the target of a public scandal. As pressure to resign builds and Bart's life is threatened, he must make a difficult choice - one that could cost him everything, including his career and the woman he's fallen for.

Erika Pittman has searched her whole life for a pack where she is loved and respected. Her small stature has led to ridicule and bullying by family and pack members which leaves her mentally scarred, not to mention, formed a concrete wall around her broken soul.

When she's rescued from a lab facility that captures and torments shifters, Erika is taken to Safe Haven, home of the Hollow Rock pack. She's quickly appointed to a position that takes her to Chattanooga, the governor's mansion, and the incredibly rich, arrogant (and undeniably sexy) Bart Smith.

She wants to hate him, but his continued effort and support prove her wrong at every turn. He leaves her wolf howling for more, and she cannot suppress her desires for long. As political turmoil rises to an insurmountable level, Erika finds herself at the receiving end of extreme injustice and wonders if her newfound happiness will end with her spending the rest of her days in a six-by-eight prison cell.

What listeners say about Impeached

Impeached, the fifth book in the Hollow Rock Shifter series is an entertaining paranormal romance. The shifters in this series have to deal with a high level of prejudice against them. The concept of discrimination is real and believable, as this is how some majorities feel toward minority groups. Brenda and Tami Julka have created a believable world with fascinating characters. The storyline centres on Erika and Bart, they're marvellous, and I thoroughly enjoyed listening to their journey.

The narration by Cliff Bergen was great. His depictions of the characters' personalities were nicely done. This was an excellent listen, and I'm looking forward to more. I was given a free copy of this audiobook at my request and have voluntarily left this review.

I enjoyed this audio book! What would it be like to be in love with a shifter! Narrators were awesome!

*No Spoilers* I loved this book. The story captured me at the very beginning and I loved it all the way through. If you need a distraction from life, this is the book to read!

Even though I’m starting this series in the middle. I really enjoyed Bart and Eryka’s love story. Even though she was tortured and was scared to trust she was able to over those hardships. Through her strength she showed Bart that love comes at the strangest time. I can’t wait to hear the next story line.