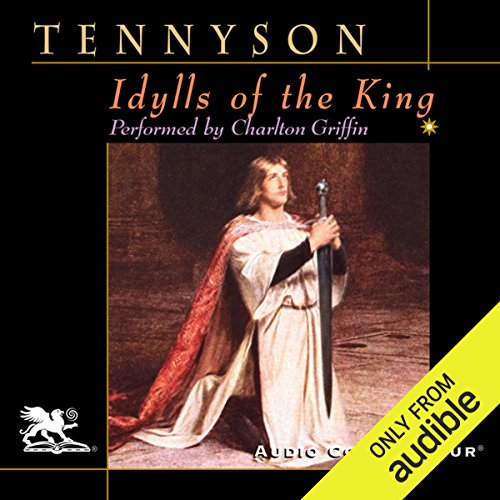 Idylls of the King

By: Alfred Tennyson
Narrated by: Charlton Griffin
Try for £0.00

The Arthurian legend of Camelot has been told many times, but never better than by Alfred Tennyson. Employing some of the most stirring and beautiful blank verse ever written, Tennyson crafted his version of the Knights of the Round Table over the course of nearly fifty years, completing it in 1885. Despite the length of time, Tennyson managed to maintain a high level of style and continuity throughout. His gift for sublime and evocative metaphor and simile has never been matched, and in this case has produced some of the most memorable lines of narrative poetry in the history of English literature.

Although Sir Thomas Mallory's Le Morte d'Arthur has been called the backbone of the Arthurian legend, Tennyson's Idylls of the King is the flesh and blood. Tennyson's epic poem consists of 12 loosely connected episodes of the knights at Camelot, Arthur himself appearing as an almost Christ-like figure among them. However, though Arthur's knights represent the highest and most virtuous ideals, they sometimes fail to live up to those ideals, and their tragic flaws eventually leads to disaster. But it is this very tension between the flawed knight struggling with his own weaknesses as he confronts evil that gives Idylls of the King its compelling qualities. Some of the most dramatic scenes in the poem concern the vicissitudes of love and the daunting ethical challenges such love poses for a knight: jealousy, betrayal, and adultery.

Tennyson's vision of glorious quests, Christian valor, doomed love, manly jousts, and bitter destiny have dazzled readers for well over 100 years. These endlessly inspiring, timeless lines of verse are not only entertaining, but enlightening as well. The timeless Idylls will no doubt continue to enthrall mankind for centuries to come.

What listeners say about Idylls of the King

Tennyson's epic poem is ruined by the narration!

Charlton Griffin narrates like he's on stage in a huge theatre, projecting to the back of the upper circle. This would be fine if he weren't, essentially, talking directly in your ear! His over-dramatic, over-emphasised and overblown style quickly sucked all the pleasure from Tennyson's words and I was forced to give up.

It's a huge shame that he's the narrator for so many classic texts, especially since there's no other version available for many of them. No matter how great the text, I won't buy anything else he narrates.

I was looking forward to hearing this book.... wanting to let the narrative wash over me... somewhat disappointing that this narrator chooses to deliver it in an outdated theatrical style..... even mis-pronouncing the title of the book.... it's 'Idylls' with the 'i' as in 'ink'..... not..... 'I' as in 'I am'.....
if the narrator converses like this in his everyday life ...... it can't earn him friends......

The narrator is very much up to the considerable challenge of his job here. However the track engineering is a bit flawed - some long unexplained silences and unnecessary 'mood' music in places which is confusing. Apart from that I enjoyed it and will be re-listening to this soon.

Maybe I'm just biased, but I've always enjoyed this book. This rendition of it made me fall in love with it all over again.

I love the Arthurian legends, but this used to be merely one of the collection for me. Superior as a story, but I don't think I appreciated blank verse poetry nearly as much back then. The last few years, I've made some personal strides on the poetic front, having learned how to finally appreciate Shakespeare, Chaucer, Byron, Shelley, and a great many others. Having returned to this one after a few years with this new appreciation, this might very well be my favorite version of the Arthur tales now. Funny how that happens sometimes.

I've picked up Audio Connoisseur titles in the past, and I've been impressed by them, both in quantity of extra information and in appreciation of the narrator. For most of my experiences, Charlton Griffin has been the performer. This guy is amazing when it comes to delivery in the classic style. I highly recommend his version of Milton's Paradise Lost for comparison.

What kind of extras are here? There is a bio of Tennyson, which I always find helpful. Knowing the artist makes for better appreciation of the art. There is an Edison recording of Tennyson reading his poem "The Charge of the Light Brigade," which for an old radio geek like me is awesome beyond words. Fair warning: you'll want a print copy to read along with because the quality is less than acceptable, but still... it's cool to have it there anyway. There is extended synopsis and analysis, so nobody's expecting you to be dropped in head first. And before the Idylls get going, there's Griffin's performance of Tennyson's classic "The Lady of Shallot." I truly wish more of his related poetry had made it into this collection, but I'll take what I can get.

On a personal appreciation level, I've found that digging into Arthurian legend and the medieval history that inspires it to be every bit as complex as digging into Tolkien's Middle-Earth. It's easy to connect the dots back and forth too, the more you dig. No doubt that has a considerable amount of my newfound appreciation for this work. Granted, most people won't do that kind of work unless it's a specialization for them. I'm strictly an amateur on this, not a tenured professor or anything, but I've been around the block enough to see an evolution in how these stories are put together. Combine that with a recently-gained appreciation for the poetic, which I've mentioned, I can look at this work in a number of ways. I see it as a pinnacle of the Arthurian legend, certainly. But I can also see it as the pinnacle of the Victorian quest to reignite the flame of romantic chivalry. That speaks to me. If that idea speaks to you as well, then I highly recommend this one.

This is wonderful poetry--descriptive, evocative and moving. The language is spell-binding. I would find myself leaving the car and thinking about the day to come in the language of Arthur and his knights.

The story is also compelling. It is a tragic and doomed tale, yet it is also noble in the characters' aspirations, efforts and, perhaps most surprisingly, self-perceptions.

Narration is the key to poetry, and Griffin's reading is absolutely superb.

There is also a fine scholarly introduction to the work, which includes an Edison recording of Tennyson himself reciting "The Charge of the Light Brigade". Not to be missed.

listening is so much better

I have read Idylls of the King, Tennyson's masterwork, and listened to some artists sing portions of it (Lorena McKennit - Lady of Shalot). Truly, the way to get the best experience of Tennyson's sweeping blank verse is to listen to it. Tune out the world, relax, and be swept away by the elegant language. 12 hours is a long time to isolate oneself from the outside world, but there are breaks, segues from one section to the next. One can take a snack break, handle e-mail and phone calls that came in while the ringer was off and other trivial details. Then put on the earphones and depart the mundane for the glorious. I highly recommend this for someone taking a long road trip. Be careful not to get so involved that you forget to pick up the kids for soccer practice. Idylls 1 & 2 is a wonderful production of a work that is neglected in print because it is too long to teach in an average English class. The Audble.com recording makes it truly accessible to eveyone. What a wonderful experience.

First of all, the longish introduction to the Idylls and the career of Tennyson was very interesting and added quite a bit to my appreciation of the poem itself. The narrator really brought out the beauty and drama of the writing, which is thrilling, strange, nuanced and incredibly sad. It gets ever darker and more tragic as it progresses, while bringing out the epic spiritual and human themes more and more vividly. Also vivid, ecstatic imagery is suggested in every line. I'm downloading in enhanced format to listen again.

Beautiful narration of a beautiful story wonderfully told in poetic language. Tennyson brings to vivid life the stories of Malory, the beauty and the sadness and the humanity. A minor quibble, I wish that the female voices had been narrated by a woman! This audio edition makes this great work accessible again. Highly recommended.

The narrating style of Charlton Griffin is perfect for this most famous work by Tennyson. He reads with tasteful flair. I especially enjoyed "Merlin and Vivien."

Tennyson is great. So is Griffin.

I don't know why I love the Arthurian story so much. It is so sad. Tennyson's take on it is quite sad, but his poetry glitters so resplendently I don't care. Griffin is up to the task. I was especially impressed with his ability to change his voice for each character and yet keep Tennyson's meter intact. At the same time, I would sometimes forget I was listening to poetry because he was telling the story so well. Don't worry about words you don't understand. Forge ahead. Beauty that will amaze you is around the corner.

Full of sound and fury

After enjoying Morte D’Arthur on Audible I was “primed” to enjoy this Victorian version of the same stories. I didn’t. The verse seemed as ornamented as a Christmas window on Fifth Avenue. The performance as chest-thumping as grand opera. The first hour or more of the title is a lecture about Tennyson that sounds like an encyclopedia article though it was written by Edmund Gosse. There is also an unintelligible historic recording of Lord T reciting the Charge of the Light Brigade. I don’t know why since it has nothing to do with the Idylls.

Why isn't this better known?

At least it wasn't known to me. Most of what I knew about the Arthurian Legend came from Monty Python and the Holy Grail. This classic is basically a long poem written in blank (non rhyming) verse. It is broken into 12 parts, most about an hour each, and are relatively self contained. It is easy to listen to, it is beautifully written, and Charlton Griffin's voice is a pleasure. Highly recommended.