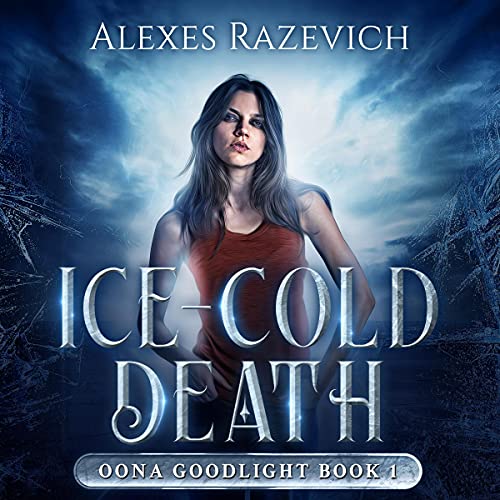 Murder and dark magic aren't even the worst of it.

Oona Goodlight just wants to get through hockey practice, but a dead body on the ice means practice is canceled. A secret psychic and empath, she is shocked by the brutal death and shocked again when she witnesses the murder - and the killer - in a vision.

When a wizard investigator asks her to use her psychic abilities to find the murderer, she’s pulled into a battle she never wanted to fight against a grudge-holding foe who’s waited a long time to see her dead.

If Harry Potter and Kinsey Millhone had a love child, she would be Oona Goodlight - wicked smart, a bit of a loner, and relentless on the hunt. If you like the perfect combination of murder mystery and the paranormal blended with a dash of romance, you’ll love this new series.

What listeners say about Ice-Cold Death

Super mix of mystery and magic

I really enjoyed this story, I liked both the lead characters Oona the secretive empathic psychic and Diego the powerful Wizard. When Oona just wanted to practice Ice Hockey with her teammates not find the body of an acquaintance on the ice, or to have a vision of the murder and murderer. Diego a private investigator and Wizard asks her to assist in the investigation and this is just the start of the problems.. An very entertaining storyline combines modern day America but were magic and paranormal powers are real and parallel other realms exist. A fact paced well written book. Narration is excellent and makes the story easy to listen to and enjoy.

Great read. What's not to love with magic, murder, a psychic and other odd charactes? A solid story with great character development, and a bit of romance woven in. The narrator was good, a couple of times I wasn't sure who was talking, but overall she was good.
I love knowing there are other books in this series waiting to be read! I'm definitely looking forward to the next adventure with Oona and Diego.

when a body is found Oona an empathic psychic get recruited by Diego a wizard P.I. to solve the case.