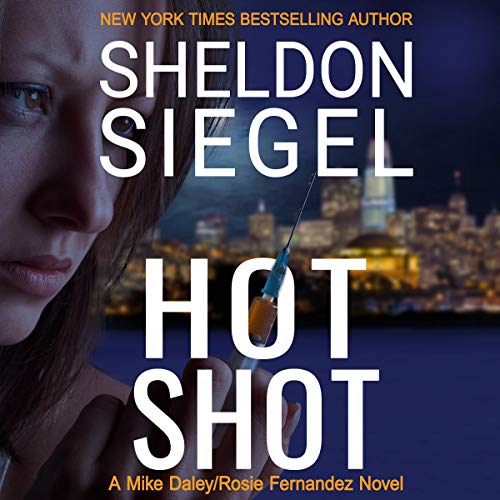 “Everything you’ve heard about sex, drugs, and misogyny in Silicon Valley is true - only it’s worse.” (Mike Daley)

It starts with a phone call on Christmas Eve. Jeff King, the founder of Silicon Valley’s hottest tech start-up, was found dead in his mansion above Mission Dolores on San Francisco’s “Billionaires Row”. Lexy Low, a young woman he had met on a “sugar daddy” site, allegedly injected King with a lethal “hot shot” of heroin.

Or did she? Was it an accident? Or murder? In the 10th installment of New York Times best-selling author Sheldon Siegel’s iconic San Francisco series, it’s up to ex-spouses and public defenders Mike Daley and Rosie Fernandez to find the truth.

King’s company, Y5K Technologies, is on the cusp of a widely anticipated IPO. In the media, King was portrayed as a visionary and a dedicated husband and father. In reality, Y5K had paid millions to settle multiple sexual harassment claims. He was also a regular heroin user and frequent visitor to a popular strip club in San Francisco’s trendy South of Market neighborhood.

Lexy is a former wunderkind programmer for one of Silicon Valley’s most successful tech companies. She loses her job when she rebuffs the advances of her supervisor. Her life spirals downward after she becomes addicted to antidepressants, pain killers, and, ultimately, heroin. Unemployed and homeless, she supports her habit by hooking up with King using the nom de plume “Sexy Lexy”.

On a rainy night, King invites his senior management team, venture capitalists, and several young women to a party at his house. He also invites Lexy for an after-party. After the other guests leave, King and Lexy rendezvous in King’s bedroom, where Lexy injects King with high-powered heroin. Lexy claims that King provided the heroin. King’s people claim that Lexy brought it. The members of management - who detested King - used the bathroom where Lexy allegedly found the heroin. Did King leave it there? Did somebody from management? Or did Lexy bring it herself?

As Lexy’s case hurtles toward trial, Mike and Rosie race from the mansions of Billionaires Row to the venture capital firms on Sand Hill Road to the high-tech office parks in Palo Alto to find the elusive truth in Silicon Valley’s boys’ club where everybody has something to hide.

An intricate plot, likable characters, powerful suspense, and a touch of humor are Sheldon Siegel’s hallmarks. Listeners will discover once again why Mike Daley and Rosie Fernandez have been called two of the most compelling characters in contemporary crime fiction.

What listeners say about Hot Shot

A good story, well performed by Tim Campbell who brings characters to life, all told easy listening and enjoyable.

The 10th book in the Mike Daley/Rosie Fernandez series is on par with the the the other nine. This is a legal/courtroom suspense
series. All of the books can be listened to as stand alone as there is little carry over from one book to the next. What little relationship continuity exists is covered in each new book.
This is well written with an unusual death penalty case. Mike, who had decided not to take on any more trials chooses to become lead for the woman accused of murder in this story. There's an ironic LOL kind of twist following the verdict.
Tim Campbell does an excellent job narrating.
HIGHLY RECOMMENDED.
If you found this review helpful please indicate so.
Thank You.

This one not up to par for the Mike Daly series.

I have read all of the books in this series. I feel bad about complaining about this book because I can only imagine the research into the world of technology that Mr. Siegel had to do along with the time he invested to write it, but to me, it was hard to get emotionally involved with any of the characters or even the storyline. it was just another case and another trial for this lawyer. What has made this series good is the deep, romantic bond between Mike and Rosy coupled by a case that arouses some degree of emotional attachment to, bonding with, the defendant. I stayed with this, but it was out of curiosity, not out of a compelling "need" to keep going back to it to find out what's happening between Mike and Rosy or what's going on with the story. This was just a long stretch of ongoing boredom. I am sorry Mr. Siegel, but I hope my critique is constructive and not unkind. You have written numerous wonderful books.

Enjoyed the story would recommend to anyone Kip my interests did not want to let it go great book!

Once again out of the park!

I love Siegel”s books, especially all of his references to Bay Area destinations. His legal knowledge with the awesome story is just out of this world. And Tim Campbell is icing on a delicious cake. I just love his readings, they become etched in my mind for days. Looking forward to book 11, PLEASE!

I absolutely love Mike and Rosie. siegel captures the exquisite nuances of the great caricatures of our 21st century. From beginning to end it is a ride thru San Francisco as if journeying to a favorite vacation. please never stop sharing your great romance with us, your attentive fans. great job Siegel.

I love this series, has a lot of court room action which is right up my alley!

Same dialog as last 9 books. No punch. I wanted to like it..... Sorry I bothered.

Book 10 is a legal thriller that takes the.reader on a dramatic ride with an seemingly impossible outcome as Mike and Rosie put the pieces together. The long list of suspicious characters, bad GUY’S and bad Girl’s, a “who done it, with plenty of sex, drugs and high society’s bad behavior.