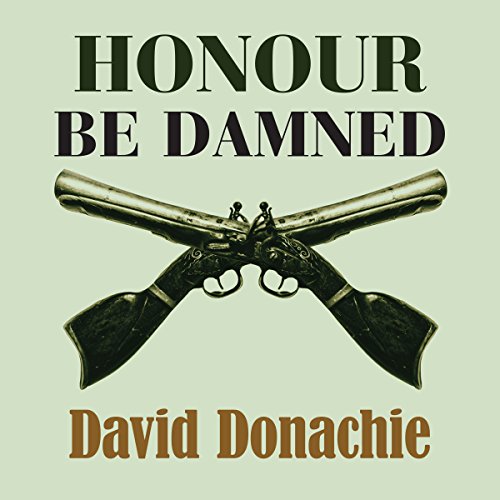 By: David Donachie
Narrated by: Gerry O'Brien
Try for £0.00

The French Revolution is turning in on itself even as the war with the English drags on. As the armies move towards Italy, George Markham and his Marines find themselves assigned to the sloop Sylphide under the impetuous Captain Germain.

Set ashore in the midst of the French army, Markham is charged with escorting a group of loyalists on a secret mission and is soon wishing he was back in the thick of it at sea. His wits and courage are tested to the limits as he tries to untangle the web of subterfuge surrounding young Germain’s insane mission.

Just as Markham looks like making headway, the unexpected arrival of a ghost from his past overturns everything and the fight is on again.

What listeners say about Honour be Damned

Was really sorry to get to the end of this the third book. Just wished the story could carry on, did the author leave an open ending just in case or is that wishful thinking?

This is the final installment in Markham of the Marines trilogy, set against the backdrop of revolutionary France in the 1790s. The historical novel is well written but the historical time line is a bit off in this book. I enjoyed the trilogy, Markham was a Royal Marine whereas, Bernard Cornwell’s Richard Sharpe was Army and the author kept pointing out the difference in roles, training and action between the two.

Lieutenant George Markham is still battling anti-Irish and anti-Catholic prejudices so prevalent in the 1700s. The action still takes place in Corsica and aboard ship. Still at loose is arch-villain Citizen Commissioner Fouguert. Markham meets Napoleon in this story. The book is full of hidden agendas, betrayals and schemes. There is ship to ship action and hand to hand combat to keep the reader’s attention. The ultimate betrayal is that of Captain George Germain the young captain of the H.M.S. Syilphide. Markham is stationed on the Syilphide as part of the Marine detachment. Germain unfairly denounces Markham to the Admiralty, leaving him where he began, seriously out of favor. Gerry O’Brien narrated the book.

Lt. Markham and his lobsterbacks at it again

What made the experience of listening to Honour be Damned the most enjoyable?

Yes, the plot as most of Mr. Donachie's stories have more than a few twist and turns to keep the reader alert. Never in a straight line in these books

Have you listened to any of Gerry O'Brien’s other performances before? How does this one compare?

I have listened to him in the first two of this series and I can find no fault in his performances, He is one of the true professionals who bring each character to life.

Please continue the story we would enjoy the next adventure of this crew. Don't wait a year to write another PLEASE