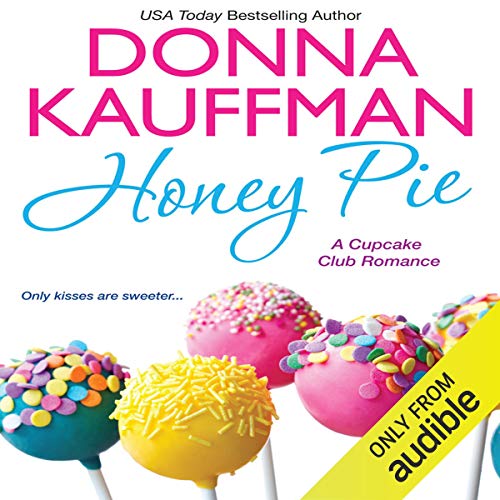 Mocha chocolate chip...caramel fudge...strawberry lemonade...butter rum... There's no such thing as guilt when it's another delicious bitch and bake session with the women of the Cupcake Club....

When Honey D'Amouvell inherits property on tiny Sugarberry Island, she's prepared to start a whole new life. Her plan is simple - make a home, open a shop, and maybe, finally, find a place to belong. But the building she now owns is leased to none other than the owner of Babycakes, which means her spot is already occupied.

Honey isn't sure how to put down roots when she has nowhere to plant them. Yet sexy, softhearted mechanic Dylan Ross seems determined to help. He's everything she never imagined she would find in a man, and each kiss is more persuasive than the last. Will Dylan convince her that what she craves most is his love?

What listeners say about Honey Pie

Great series. I recommend listening to all of them. It’s not full of sex. There is a little but it’s a very small part of a long book. The cup cake group is funny and it’s just a fun book to listen to.

My Least Favorite of the Cupcake Club Series

Having listened to all four books in the Cupcake Club Series in the last few days, I can confidently say that this was my least favorite. The sudden inclusion of clairvoyance in what was otherwise a realistic, if quirky, setting was too far a stretch for my liking. I purposely steer clear of books with supernatural themes because they just aren't my cup of tea, so to have one thrust upon me as the conclusion to a series was disconcerting and disappointing.


Also unrealistic was how Dylan's entire personality seemed to change almost overnight. His surly, taciturn demeanor quite rapidly transformed into lovesick and overtly affectionate. Dylan and Honey's decision to move in together after knowing each other for what amounted to two or three weeks adds to the dubiousness of their relationship.


As with all of the Cupcake Club books, the characters' waffling ends up being redundant. It seems like they make the same arguments and justifications for their feelings and decisions over and over again before finally just giving in without having really experienced any kind of personal growth. This also makes it seem like I’ve listened to less of the book than I actually have. When Honey Pie’s epilogue came on, I was surprised, having assumed that there would be a good deal more story to listen to. My first thought was that this book must have been several hours shorter than the first three, but in fact it is only very slightly shorter. There just wasn’t enough story there for me to realize how long I had been listening.


Alva's meddling reaches new heights in this book, and is frankly pretty off-putting. She went from being an eccentric busybody to being pushy and rude and completely catapulting over the line between an acceptable level of interest in a new neighbor and an overbearing and overwhelming force trying to wedge herself into the business of a young woman who clearly isn't comfortable with that amount of intrusion. That the denizens of Sugarberry simply accept Alva's nosiness as a charming aspect of her personality even when her gossiping reveals their own secrets is annoying and counterproductive.


Kauffman needs to vary her vocabulary. Most, if not all, of the books featured the same words: capitulate, veritable, visceral, poleax, as well as a couple others. These are all perfectly good words, but it was as though the author had to fill a quota in each book. It felt unnatural for them to appear in each story. She also made a couple of mistakes in details along the way. In the first book, she says that Charlotte moved from New Delhi to America at the age of 12, but in a subsequent book it is said that Charlotte moved from Dubai when she was 18, although her accent remains Indian throughout the series. Carlo was originally from a Puerto Rican family, but this changed to Cuban at the same time that Charlotte's origin story changed. Baxter's cooking show is described in the first book as being on network tv, but later in the series it is mentioned that his show had just recently moved to network tv.


As for Amanda Ranconi's performance, much of it was fine, though nothing special. The part that I had a problem with was when she had to affect an accent for one or another of the characters. Over the course of the series, she was required to speak as an elderly Southern woman, a British man who had supposedly morphed his Cockney accent into an East End one, a woman who had moved from India to New York as a preteen, a man from the Bronx who covered up his natural accent with an affected French one, a snobby older Southern woman, a younger Southern woman, two different younger Southern men, and a man who grew up just outside D.C. but who had inexplicably gained a Southern accent while spending the summers of his youth in Georgia even though he hadn't been back in over a decade. I'm not saying that all those different voices would be easy for one person to do, but oftentimes I had trouble figuring out who was speaking because her Indian accent would start to sound British, or the Indian and fake French accents would sound too similar when those two people were in the same conversation. There were many times when the author indicated that the British man or the Indian woman thickened his or her accent, but that distinction was not evident in Ranconi's reading of their dialogue. If a book has so many disparate voices, the producers of the audiobook might want to consider having it read by a full cast so that each of the characters can be heard as intended.


The endings to the stories are a bit lackluster and unsatisfying. The epilogues typically only jump a few weeks into the future, so we don't really get a sense of a true HEA. Even with the clairvoyant woman, we only get a secondhand description of the vision she had for their future, but there is no indication of how long it takes for that to happen. She hasn't even opened her store by the end of the epilogue, which was several months after the end of the main story.


This series ultimately wasn't for me, but if you're not a stickler for the details, and you enjoy sweet romances with a little bit of spice, then you should go ahead and try it out.

I think this book was one of the best ever by Ms. Kauffman. I love the characters!

Quite enjoyed this one! Nice wrap up to the series, though still have some unanswered questions. Does Honey end up doing what her aunt did for the community? An what ever became of Charlotte and Carlos? Does Carlos find a way to navigate his family's expectations? And how do Kit and Morgan deal with theirs? Did Morgan's mother eventually back down or did she sue for visitation?

One of favorite Donna Kauffman romances. Interesting characters. Cute small town Southern charm. Navigating character relationships was deep but not heavy. Some stock characters, but each played an important and memorable part to the story. Light and fun. Good for listening in the car. Amanda Rincone is one of my favorite narrators. She’s a perfect choice for this story, or any Donna Kauffman stories.

Loved the touch of paranormal!

I really liked the addition of the paranormal part. And the narrator was great, as usual. But I thought the story needed more to it as far as developing how she uses her talents, and more interaction with the cupcake club. This one was a little short on content & details.

Unique Love story with several wonderful twists. Really keeps you interested and on edge as what will happen next.

Listened to all the books in this series. Loved the interactions between the characters, In all of these books. Love the idea of the physics aspect in this story line. there's a build up characters , then the let down at the end. There's a mention of something bad that's going to happen, then you hear that it had happened a the person was safe. Nothing about how the information was used. Same ending as the other books. they fall In love a boom the story ending. Needs a little more meat in the storyline. Good ideas, interesting characters, endings are a let down.

Part of a series so plenty of familiar and new characters. The story has a supernatural element because Honey has visions of the future and has to learn to live with them or become a hermit. Dillion is a recluse with a sad history. Together the learn to cope with the outside world while falling in love. The narration is not very good but the story is different and the characters are unique enough to make it interesting. Not worth a credit but as an audible plus selection it is worth a listen.