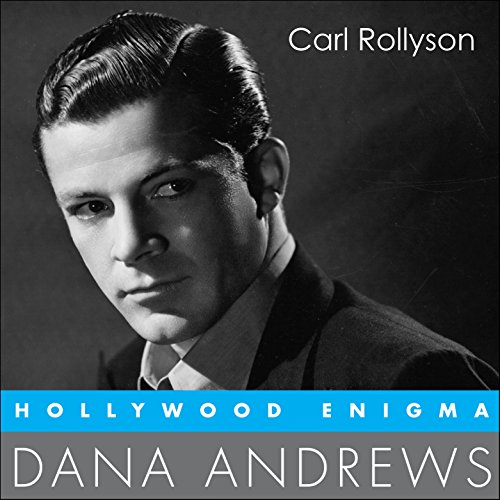 Dana Andrews (1909-1992) worked with distinguished directors such as John Ford, Lewis Milestone, Otto Preminger, Fritz Lang, William Wyler, William A. Wellman, Mervyn Le Roy, Jean Renoir, and Elia Kazan. He played romantic leads alongside the great beauties of the modern screen, including Joan Crawford, Elizabeth Taylor, Greer Garson, Merle Oberon, Linda Darnell, Susan Hayward, Maureen O'Hara, and most important of all, Gene Tierney, with whom he did five films. Retrospectives of his work often elicit high praise for an underrated actor, a master of the minimalist style. His image personified the "male mask" of the 1940s in classic films such as Laura, Fallen Angel, and Where the Sidewalk Ends, in which he played the "masculine ideal of steely impassivity." No comprehensive discussion of film noir can neglect his performances. He was an "actor's actor."

Here at last is the complete story of a great actor, his difficult struggle to overcome alcoholism while enjoying the accolades of his contemporaries, a successful term as president of the Screen Actors Guild, and the love of family and friends that never deserted him. Based on diaries, letters, home movies, and other documents, this biography explores the mystery of a poor boy from Texas who made his Hollywood dream come true even as he sought a life apart from the limelight and the backbiting of contemporaries jockeying for prizes and prestige. Called "one of nature's noblemen" by his fellow actor Norman Lloyd, Dana Andrews emerges from Hollywood Enigma as an admirable American success story, fighting his inner demons and ultimately winning.

The enigma is how this was published and produced. The author confuses research with writing and buries the narrative under pointless banal detail. His naive take on the Hollywood 10 reveals shocking ignorance.
The narrator has a pleasant voice but attempts character voices and accents that are beyond his ability and distracting. Worse - he reads like a kindergarten teacher who tries to make the word cold sound cold. The recording is also marred by audible’s usually sloppy editing and contains many repeated passages.Dana Andrews deserves better. Much better!

I completed reading my first biography. This was a special experience for me as my Uncle Carl wrote this wonderful book. Before I started reading this book, I watched about ten movies that Dana Andrews did during his career. I will remember LAURA always.

Another thing I did before reading the biography was to engage in a Group on Facebook that discussed Dana Andrews. It was great to get perspectives from others on this great actor.

When I started the book, I think I picked it up and put it down over a dozen times. I never read a biography before. The style was totally different from anything I've read in the past.

One day, I opened the book and forged forward. I really related to Dana's father. I too am a pastor in the Church.

Once I got into the Dana's move out West, I got excited. I think it was from watching all the movies before I started reading the book. Now that I was moving through the book, I found I couldn't put it down.

Overall, I LOVED this book. I think Mr. Rollyson did an exceptional job researching Mr. Andrews and developing his story. I am recommending this book to readers especially those who love reading about Hollywood stars.

A New look at an Old Star

I had seen many of Dana Andrews films and always thought him a capable actor, but only a few films really stood out for me of his, so I was totally surprised to become interested in his personal story as a preacher's son and family man. He truly was a complex fellow and it was nice to learn he'd beat alcoholism in his later years. Although his story didn't have a happy ending with him living happily ever after, it did make him more human.