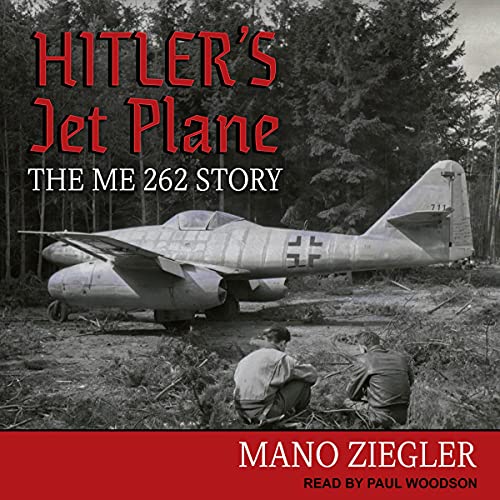 By: Mano Ziegler
Narrated by: Paul Woodson
Try for £0.00

The first operational military jet in the world, toward the end of the Second World War, the Me 262 was to be the German "miracle weapon". Mano Ziegler was involved from its inception and contributed to the design, testing, training, and even served in it operationally.

Could the Me 262 have broken the Allied supremacy in the air? Why did it take so long to come into service, and why were hundreds of German pilots sacrificed in developing it? Why did the Me 262 prove not to be the unparalleled success claimed by Goering and why were German cities left dangerously exposed against Allied bombing campaigns? These are only some of the important questions this book answers.

Hitler's Jet Plane fills an important gap in the history of the Luftwaffe and of aviation in general with new research which discloses how the first military jet plane failed to make its mark on World War II.