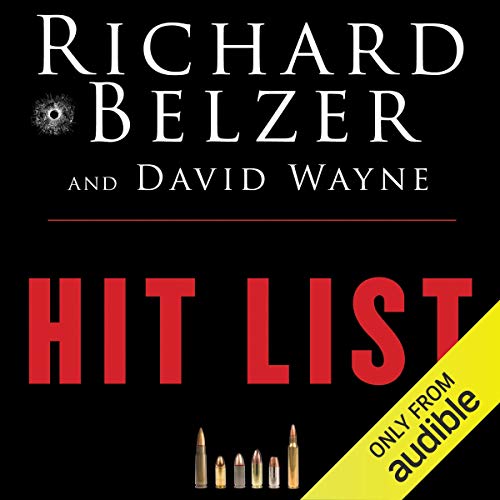 By: David Wayne,Richard Belzer
Narrated by: Tom Stechschulte
Try for £0.00

Richard Belzer and David Wayne are back to set the record straight after Dead Wrong; this time they’re going to uncover the truth about the many witness deaths tied to the JFK assassination.

For decades, government pundits have dismissed these “coincidental” deaths, even regarding them as “myths” as “urban legends.” Like most people, Richard and David were initially unsure about what to make of these ‘coincidences’. After all, events don’t “consult the odds” prior to happening; they simply happen. Then someone comes along later and figures out what the odds of it happening were. Some of the deaths seemed purely coincidental; heart attacks, hunting accidents. Others clearly seemed noteworthy; witnesses who did seem to know something and did seem to die mysteriously.

Hit List is a fair examination of the evidence of each case, leading to (necessarily) different conclusions. The findings were absolutely staggering; as some cases were clearly linked to a “clean-up operation” after the murder of President Kennedy, while others were the result of ‘other forces’. The impeccable research and writing of Richard Belzer and David Wayne show that if the government is trying to hide anything, they’re the duo who will uncover it.

Good grief this is a repetitive book. At times I felt the Audible app was stuck in some sort of rewind mode.

I had to return it because although the content might be interesting I just could not get past the constant verbatim repetitions.

Superb book, well worth listening to!
Compelling information sometimes difficult to accept on merit, but once the details are explained in each case, the Kennedy assassination becomes a lot clearer. Whichever your opinion on the matter, this book highlights many of the oddities or unexplained circumstances surrounding the JFK murder; and why so many individuals connected (or interwoven may be a better word) to the events of Dallas were "eliminated" in suspicious ways, and in some cases not only together but almost at the same time!
Highly recommended

Written in an awful mix of comedic and quasi documentary styles this book rambles around a series of disconnected and unsubstantiated facts. I could not get past the first chapters. The narrator was good though.

Fascism will come to the USA in the name of national security...

Great book which does justice to all those who died speaking truth in the aftermath of November 22nd 1963. The more you read on this topic, the more the cover up seems so obvious. Its cited as the no.1 conspiracy theory and yet, its not a theory, its a piece of history with a legacy that is felt today. Some say the moment America lost its innocence. I would high recommend James W Doughlass - The Unspeakable, David Talbot’s - Brothers and Mark Lane’s - The Last Word, which really gives context of the JFK Assassination.

genuine well argued case for there being more than one smoking gun. as a sceptic it made me revaluate my ideas about what really took place behind the official warren commision report. its drenched in mystery intrigue and suspicion.

Excellent book. I've always wondered how such seemingly desperate groups and people could have come together to pull of the seemingly impossible. After reading this book I'm now much more enlightened. Certainly plausible.

What made the experience of listening to Hit List the most enjoyable?

What was one of the most memorable moments of Hit List?

All the people LBJ had killed

What does Tom Stechschulte bring to the story that you wouldn’t experience if you just read the book?

He did great job

Can't believe all the people killed over JFK. Way to many

liked the effort and the light shed on suspicious deaths related to JFK. But accounts were somewhat vague as to how exactly they connect to JFK death.

One of Mssr’s Belzer & Wayne’s chief sources for this book was a man named Tosh Plumlee. He has muddied the waters for JFK assassination researchers with his claims that he flew an Abort Team, starring Johnny Roselli, to Dallas on that fateful day.

Plumlee has claimed a mountainous paper/electronic trail for his bonafides, and the only problem with those bonafides is that, beyond his own word, there’s not a single, solitary document that indicates that he’s ever been involved in any covert activity. He often points to his numerous interviews – “debriefings” – by the FBI as proof of his involvement with the covert world. But every one of those reports was initiated by him. Yes, that’s right. In every instance he contacted the FBI, explained that he has information about this or that, is interviewed, and then the FBI files a report. When that report is routinely declassified, he points to it and says, “See? I was involved.”

But the truth is he was never involved in anything having to do with the assassination.

William Robert “Tosh” Plumlee joined the military when he was 15 years old, in March, 1953. He was processed for discharge for being underage four months later, returning to Dallas, Texas – his home – in July 1953. That is the extent of his military service.

He attended North Dallas High School that same year, 1953, as a sophomore, using the name of Billy Bob Morgan. His stepfather’s name was Morgan.

Other places on the internet, he has claimed that he joined the military in April 1954. This is impossible mainly because he was a high school student then, and also because he didn’t reach 17 years of age until November 1954. According to his FBI file he was born 11/25/37. Seventeen is the earliest you can join the military, and even then it requires parental approval.

So, he was either a student, or a commercial/covert pilot, or he joined the military. I vote high school student.

He subsequently has claimed (in yet another FBI interview) that he flew a P-52 Mustang fighter for our side at the Bay of Pigs. The only problem is, there were no P-52 Mustangs in the Exile Air Force. They didn’t have the range necessary to fly from Guatemala to Cuba. In all of the combat reports, CIA reports, narratives, interviews, articles, etc. about the Bay of Pigs operation, the only claim of a P-52 Mustang in the skies over Cuba then is Tosh Plumlee’s.

Just check the record. It constantly amazes me that people are so anxious to believe this guy that they don’t even read the bonafides he points to as credentials. Just read them. You’ll see they don’t stand the light of day.

Has Hit List turned you off from other books in this genre?

Extremely enjoyable to listen to - brought back my questioning youth

I am 62 and lived through these times . I always had questions and was curious even at my young age at the time - that things just didn't seem right. This audiobook entertained me - had me thinking - and brought back youthful memories - I sure part of the reason why I became a history buff .

This book is a piece of garbage. It could have easily have been 1/3 of the size if the author did not repeat himself. Like a kid cheating on a essay that needs to fill space. I actually thought the book I had was a misprint as it repeated what I just read every other page. On top of it was a sloppy , sloppy , story and zero insight of evidence. I usually look @ a bad book in a positive light but this book was a waste of time and money. Stick to playing dress up Belzer!!!

Was this Edited at All?

Somebody with a very short attention span

anything by any other author

the narrator wasn't the problem.

Another reviewer mentioned repetitiveness . That is a major, MAJOR understatement. I got 10 chapters in before I had to quit - the same paragraph kept repeating almost at the end of every chapter. I get it - there were an overwhelming number of deaths of people "related to" the JFK assignation. Either that or promises of more explanation to come in later chapters. Where's the meat? The substance? I think the author may have tried to cover too much territory and should have just concentrated on a few specific, clearly related instances and let the readers go from there. I feel like listening to this was like getting hit over the head with a hammer. I got it, I got it, stop already!

Would you consider the audio edition of Hit List to be better than the print version?

Don't have the print version

Which character – as performed by Tom Stechschulte – was your favorite?

Describing the "plastic surgery" that was done on JFK post assassination

Credit given for going so in depth into so many of those witnesses who "died" post JFK assassination. The clarity of the conclusions was also appreciated.

What made the experience of listening to Hit List the most enjoyable?

I don't know if this aspect s in th printed version, but this audio version is repetitive relaying all the stories. Maybe the author wrote it this way. It's also written over dramatically, i.e., "Get a load of this..."

I liked all the delving into the mysterious deaths of minor characters in the story.

I am actually quite interested in what the authors dug up about the deaths of all these witnesses, but I found the writing insufferably bad. They frequently repeat vague assertions instead of backing them up with details, and fail to create a coherent narrative beyond the idea that "this is all way too fishy to be coincidence". I stalled out partway through chapter 1. Which is too bad, because it sounds like a whole lot of people died in odd circumstances and with suspicious timing, and I'd like to know more about that.

I thought it would be more in story format but it's more like listening to someone reading to you.

Very long book which I normally choose on purpose but the majority of it is repeating the same thing over and over.