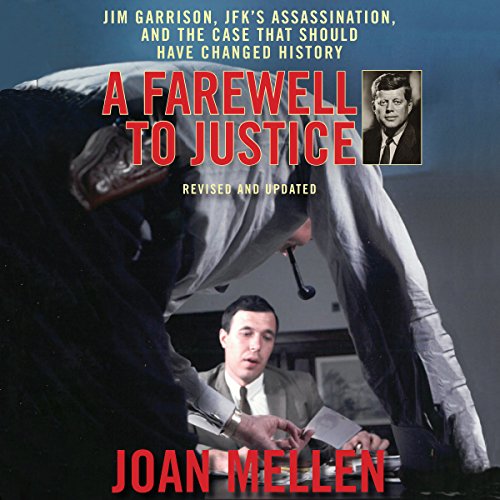 A Farewell to Justice

Working with thousands of previously unreleased documents and drawing on more than one thousand interviews, with many witnesses speaking out for the first time, Joan Mellen revisits the investigation of New Orleans district attorney Jim Garrison, the only public official to have indicted, in 1969, a suspect in President John F. Kennedy's murder.

Garrison began by exposing the contradictions in the Warren Report, which concluded that Lee Harvey Oswald was an unstable pro-Castro Marxist who acted alone in killing Kennedy. A Farewell to Justice reveals that Oswald, no Marxist, was in fact working with both the FBI and the CIA, as well as with US Customs, and that the attempts to sabotage Garrison's investigation reached the highest levels of the US government. Garrison's suspects included CIA-sponsored soldiers of fortune enlisted in assassination attempts against Fidel Castro, an anti-Castro Cuban asset, and a young runner for the conspirators, interviewed here for the first time by the author.

Building upon Garrison's effort, Mellen uncovers decisive new evidence and clearly establishes the intelligence agencies' roles in both a president's assassination and its cover-up. In this revised edition, to be published in time for the fiftieth anniversary of the president's assassination, the author reveals new sources and recently uncovered documents confirming in greater detail just how involved the CIA was in the events of November 22, 1963. More than one hundred new pages add critical evidence and information into one of the most significant events in human history.

What listeners say about A Farewell to Justice

If you could sum up A Farewell to Justice in three words, what would they be?

The massive amount of research into other aspects of the assassination other researchers either, hadn't the time or resources, monetary funds or the dedication Joan clearly possesses from which to fill this masterpiece.

Very easy on the ears.

Definitely up there with Gaeton Fonzi, Sylvia Meagher and Mark Lane insofar as an investigative masterpiece.

On the trail of the assassins 2.0

This is a very long and meticulously researched book. It is in essence a longer and more comprehensive update of the Jim Garrison book "On the trail of the assassins" Anyone not familiar to the JFK New Orleans plot would probably benefit from reading the original book first as you will understand the complicated storyline much better. I believe this book was researched from the Jim Garrison files released by the Assassination Records Review Board (ARRB). Jim Garrison was the District Attorney of Orleans Parish between 1961 and 1973 and this book is about his investigation of the JFK assassination and the prosecution of a prominent New Orleans businessman Mr Clay Shaw believed to have been involved in the conspiracy. As other reviewers have commented the narrative does jump around quite a bit and there are a very large number of names and places to remember. You really do have to concentrate to follow the storyline, the original Jim Garrison book is far more user friendly in that respect although much less detailed. In among this books very long narrative there are some truly stunning revelations which if true are really quite shocking.
I believe this book ultimately falls short of being a classic Joan Mellen appears to be far more of a researcher then writer but it is a worthwhile read if you have a hard core interest in JFK and the background to his tragic death.

It fills in the pieces the books by Jim and others as well as the movie leave out and it’s at times shocking but overall telling.

A Deep Dive into Jim Garrison

This is just what I was looking for. After watching JFK, reading On the Trail of the Assassins by Jim Garrison and Last Word by Mark Lane, Joan Mellon takes us deeper into the story of Jim Garrison. The research involved in this book rivals Dick Russell and even Jim Garrison himself.

very good had a lot of things most people don't know. I enjoyed listening to it

It was ok. Monotone voice. Starts off ok but never seems like it has a point. If you are really into the jfk stuff then it’s ok. But if you are not familiar with the case you will get lost.

Just another whacky conspiracy theory book, and at that a poor one. Save your time and money!