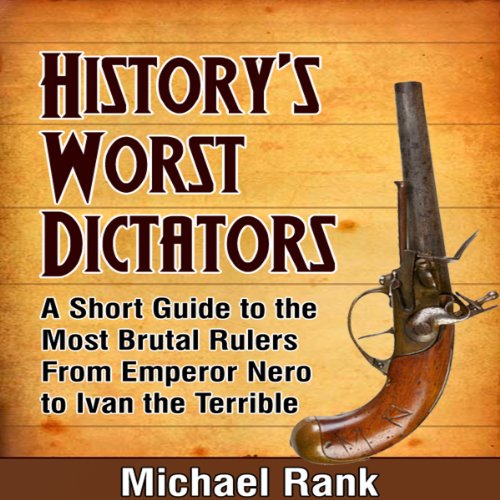 History's Worst Dictators is the exciting new book from best-selling author Michael Rank. It is currently #1 on Amazon.com in the categories of Medieval History and Weapons and Warfare (as of March 9, 2013) and slated for translation into German.

“History as it ought to be told”

“I would read more history if it came packaged like this”

Here is the book description:

This is the way English philosopher Thomas Hobbes described the living conditions into which humans inevitably fall without a strong, central authority. However, Hobbes would agree that living under a brutal dictator could lead to the same conditions. He would know -- he lived a century after the bloody reign of Henry VIII, 150 years after Spanish conquistadors witnessed Montezuma II offering up thousands of human sacrifices, and four centuries after Genghis Khan rode throughout Eurasia and left behind enough death and destruction to depopulate major parts of the globe.

This exciting new book from historian Michael Rank looks at the lives and times of the worst dictators in history. You will learn about their reigns and violent actions, such as...

-Emperor Nero's murder of family members, suspected arson of Rome, and widespread execution of religious minorities, which caused many early Christians to believe that he was the Antichrist.

-Herod the Great's use of crowd slaughter, family killings, and even infanticide to hold on to his rule.

-Vlad the Impaler (also known as Vlad Dracul, the namesake of the vampire) and his use of impalement to kill more than 20,000 victims, even causing a superior army turn around and avoid fighting him when they witnessed his carnage.

These four leaders and six others from ancient, medieval, and early modern history fill this book. Learn about how they earned their reputation as the worst dictators in history and why they are so infamous in popular culture today.

Ok.. but not Great... interesting stuff and surprising that today's tyrants are held back in such a way...

What disappointed you about History's Worst Dictators?

Has numerous historical inaccuracies. Doesn't have any of anything other than a collection of the authors opions masked as history. A lousy book even at the cheap price.

What was most disappointing about Michael Rank’s story?

Good title. Nothing else to say positive about this

First time ever I am returning a book to audible for credit.