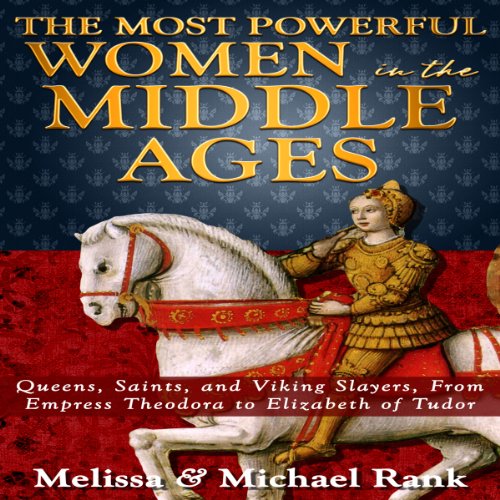 The Most Powerful Women in the Middle Ages

By: Melissa Rank,Michael Rank
Narrated by: Anne Day-Jones
Try for £0.00

The idea of a powerful woman in the Middle Ages seems like an oxymoron. Females in this time are imagined to be damsels in distress, trapped in a high tower, and waiting for knights to rescue them, all while wearing traffic-cones for a hat. After rescue, their lives improved little. Their career choices were to be either docile queens, housewives, or be burned at the stake for witchcraft. But what if this image of medieval women is a complete fiction?

It turns out that it is. Powerful female rulers fill the Middle Ages. Anglo-Saxon queen Aethelflaed personally led armies into direct combat with Vikings in the 900s and saved England from foreign invasion. Byzantine Empress Theodora kept the empire from falling apart during the Nika Revolts and stopped her husband Justinian from fleeing Constantinople. Catherine of Siena almost single-handedly restored the papacy to Rome in the 1300s and navigated the brutal and male-dominated world of Italian politics. Joan of Arc completely reversed the fortunes of France in the Hundred Years War and commanded assaults on English fortresses despite being an illiterate 17-year-old peasant.

This audiobook will look at the lives of the ten most powerful women in the Middle Ages. Whether it is the famed scholar Anna Komnene, who wrote the first narrative history, or Ottoman Queen Mother Kosem Sultan, who ruled the Islamic empire through three of her sons - all these women held extraordinary levels of power at a time when women were thought to not have any. It will explore how they managed to ascend the throne, what made their accomplishments so notable, and the impact they had on their respective societies after their deaths. It will also describe the historical background of these women, their cultures, and what about it helped or hindered their rise.

Their stories still echo down to today. They are a testimony to the resiliency of individuals to accomplish extraordinary things, even if society puts on them enormous constraints.

I’m writing this review as both a historian and author. This book tells many great stories, but the authors have a ridiculous obsession with finding bizarre and often insulting and erroneous modern celebrities or stereotypes. If they simply left those awful comparisons out I would have enjoyed the book much more. Instead I feel like writing them an essay on the ignorance and snobbery they have displayed. They have also accepted many old myths that have since been busted by professional historians, such as saying that Juana, daughter of Isabelle of Castile was insane. Oh how tired that trope is. I was excited by this book because women’s history is my niche, but the authors constant, trite modern comparisons are grating and will make this book date very badly. Wikipedia could tell you as much about these subjects as this book, without the authors personal prejudices about modern life intruding.

I enjoyed this quick tour of the stories of prominent medieval women. The narrator was excellent. I have preferred other medieval history that I have listened to lately, including various Great Courses and the Dan Brown and Susan Wise Bauer books.

Good to a point.

Not a bad summary of these lives. There are times when things are simplified to the point of portraying incorrect facts. It also missed out a lot of other women from the same period just as, and in some cases, more impressive than the women portrayed. Not bad but missed its potential.

how history can be fun and informative

really enjoyed the historical facts and the added humorous commentary. light but filling meal of knowledge

I finished this in a day. I really enjoyed it but I must admit that the strict historian may be a tad skeptical of this books accuracy. I enjoyed that it was simple and easy to follow and performed well. If this subject is even vaugely interesting to you, you should read it.