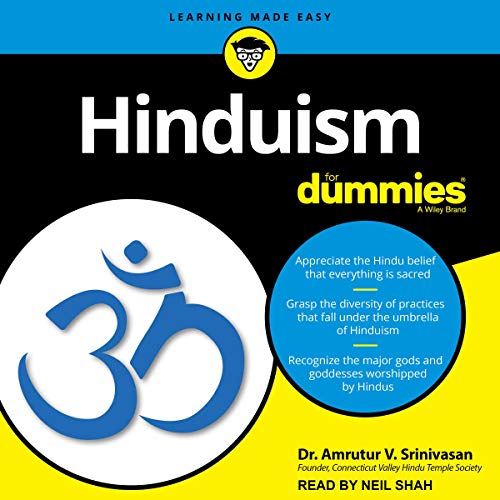 The dominant religion of India, "Hinduism" refers to a wide variety of religious traditions and philosophies that have developed over thousands of years. Today, the United States is home to approximately one million Hindus.

If you've heard of this ancient religion and are looking for a reference that explains the intricacies of the customs, practices, and teachings of this ancient spiritual system, Hinduism for Dummies is for you!

Continuing the Dummies tradition of making the world's religions engaging and accessible to everyone, Hinduism for Dummies is your hands-on, friendly guide to this fascinating religion.

What listeners say about Hinduism for Dummies

I got this to learn about the Hindu religions and the one thing that kept me engaged was the reader. Neil Shah is an excellent reader! His reading style and voice kept me wanting to hear more about what was in this book. In fact I now am looking into more of the books he reads just because he reads them. I want to thank him specifically for reading this. Niel, keep this up, I could listen to all the books you read. If only I had more time. :)

Well I bought the book...

After hearing half of this book I purchased the paperback version so that I can easily maintain this knowledge. Very happy with the delivery as well as the content.

I selected this text as part of my journey this year, in 2020, to better understand world religions. This book allowed me to be introduced on a basic level to Hinduism and would also allow the reader to take a deeper dive into this particular religion. I will admit that I ended up skipping/scanning through later chapters as I did not feel a need to know and understand the depth that this text takes the reader. This met my need and interest for learning; however, in hindsight, I could have possibly selected a text that was a bit lighter.

Author’s writing style feels like it requires reader to have Olympics level of fitness to be able to jump from one topic to another from one point in history or geography to another while following author in his well intended efforts to present extensive content by jumping extensively in every possible direction with missing consistency and focus.

Perhaps future versions will bring more consistency and focus and make it more aligned with the title.