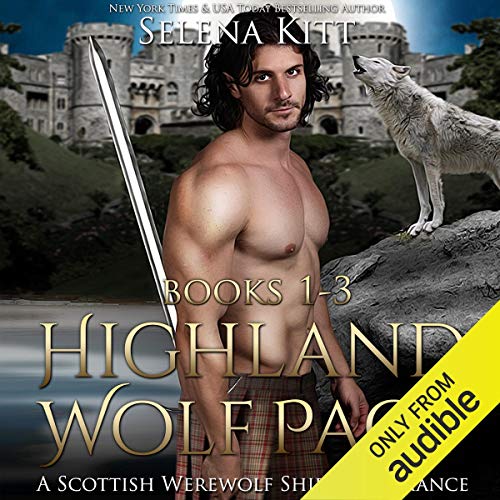 By: Selena Kitt
Narrated by: Dave Gillies
Try for £0.00

Sibyl Blackthorne isn't afraid of anything - except maybe being sold into marriage to a man she doesn't love. A man she's never even met. A man who, by reputation, is one of Scotland's cruelest lairds in over a century.

But what choice does she have, with her father dead and her uncle now married to his brother's widow, putting him in charge of not only the Blackthorne fortune, but Sibyl's future as well?

Then her betrothed turns out to actually be far worse than his reputation, so headstrong Sibyl decides life as a peasant, or even death, would be preferable to a future with such a despicable man, and makes plans to run away.

On an organized hunt for wolves - or, as the Scots call them, wulvers - Sibyl escapes her fiancé's clutches, only to find she's run into something far more untamed and dangerous in the middle of the woods.

When a big, brawny, long-haired man, who only speaks to her in Gaelic and calls himself Raife, simply picks her up and carries her off with him into the Scottish wild, Sibyl knows she's in trouble.

had a wee bit of trouble with a man trying to sound like a woman, but it was a minor irritation. Quite enjoyed the three stories but could be a bit long winded before any action.

I know it seems strange to find errors in a fantasy about ‘Wulvers’, but where enough research has been done to bring Gaelic into the story, you would expect the author to know that there are no chipmunks or coyotes in Scotland and no-one in Scotland (or anywhere in the UK) has biscuits and gravy! Also, there is no such word as ‘Mayhaps’. Mayhap however does exist. Sorry for the rant, but the glaring errors brought me out of the story.

I loved this series, and I could hardly "put it down". The narrator of the books was excellent and his Scottish accent went along with the setting perfectly. He also voiced the parts of both men and women pretty well.

What would have made Highland Wolf Pact Boxed Set better?

Not sure, Selena characters repeat the same lines or whiny thoughts way too often and it made me roll my eyes and huff! I got tired of the storyline not holding my attention so I never made it through all three books.

What was most disappointing about Selena Kitt’s story?

How the women are seen to make really bad flash decisions even when they argue with themselves either while doing them or after.

Dave Gillis does a good read, I just found the books lacking.

If you could play editor, what scene or scenes would you have cut from Highland Wolf Pact Boxed Set?

Scenes just need to be stronger, more structured for lack of a better description.

These three books introduce you to an ancient breed of wolf shifter with a twist. The romance is hot the storyline keeps you interested and the narrator seals up the story like a pretty little bow. Enjoy the read.

Wonder why so many good reviews

I normally agree with the majority of reviewers but this time I am baffled!

Sooo much internal dialog and contrived angst. The story idea was interesting but the actual implantation falls far short. I had to listen as far as I could on a faster speed.

The females are intended to be tough and strong personalities. Instead they are totally dependent on the male characters for their every emotion and perseverance endlessly on the same internal dialog.

The males are so black and white good or evil.
They are also clueless about females

The male narrations were fine but the female characters were terrible and distracting. I kept thinking of the Monty python crew doing female voices.

All in all I thought this storyline was not worth s credit.

Would you listen to Highland Wolf Pact Boxed Set again? Why?

I love this set of books. I just love the story line and the love story. I was on the edge from beginning to end and was sad when at the epilogue. I love Cybil and her interactions with her "family". I love the bravery of Kirsten. I love how Griff sought to find his future and found what he was not searching for or believed in. All in all I loved how the story was narrated and find myself repeating some of the common phrases used. I am glad for audiobooks, I love reading but listening to my books on long drives is the best.

What other book might you compare Highland Wolf Pact Boxed Set to and why?

Several scenes, when Rafe first saw Cybil and helped her over the river, when Donald first meet his mate and the scene with Griff and his mate becomes king and queen.

Yes, but I could not so I savored it each day.

Beautiful story, looking for more books like this one.

It was fantastic from start to finish. the story AND the sex ;p
Loves listening to the narrator too

LOVED everything about book one, and the narrator could read me the phone book and make it seductive!

Book two was way too repetitive, little different story twist, but not an interesting one, DNF

this books totally captivated me and hand me wanting and listen for more. Very steamy hot romance from beginning ,middle ,to end. So much action ,romance ,mystical magic. Good against evil.

the book started out well but then we had chapters of a female werewolf who wanted the to find the cure. No other development in the story. it was like being caught in angst hell. I couldn't handle it anymore and returned the book

I really liked the story, but had issues with the female characters in the first book. . The author introduced us to a strong female character who came across as a swooning drama queen. I was half way through the first book before I realized that the performer had difficulty creating a female voice. His high pitched efforts fell a bit short. Once I realized this, I was able to get past it and enjoy the rest of the ser. I like his accent and his reading for the male characters. Perhaps he should find a female reading partner to team up with him.

The books themselves told a rather unique story that was easy to get lost in. The characters were easy to love. I would love to see more from this author.