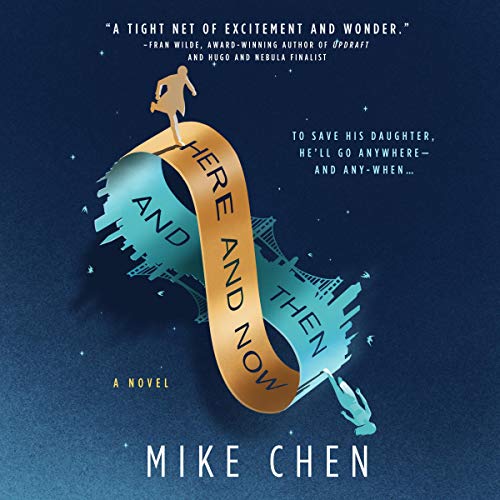 Here and Now and Then

To save his daughter, he’ll go anywhere - and any-when....

Kin Stewart is an everyday family man: working in IT, trying to keep the spark in his marriage, struggling to connect with his teenage daughter, Miranda. But his current life is a far cry from his previous career...as a time-traveling secret agent from 2142.

Stranded in suburban San Francisco since the 1990s after a botched mission, Kin has kept his past hidden from everyone around him, despite the increasing blackouts and memory loss affecting his time-traveler’s brain. Until one afternoon, his “rescue” team arrives - 18 years too late.

Their mission: return Kin to 2142, where he’s only been gone weeks, not years, and where another family is waiting for him. A family he can’t remember.

Torn between two lives, Kin is desperate for a way to stay connected to both. But when his best efforts threaten to destroy the agency and even history itself, his daughter’s very existence is at risk. It’ll take one final trip across time to save Miranda - even if it means breaking all the rules of time travel in the process.

A uniquely emotional genre-bending debut, Here and Now and Then captures the perfect balance of heart, playfulness, and imagination, offering an intimate glimpse into the crevices of a father’s heart and its capacity to stretch across both space and time to protect the people that mean the most.

What listeners say about Here and Now and Then

This is a real shame. I was really enjoying this book, but had to stop halfway through as the actor has one of the worst English accents I’ve ever heard (and that is a high, high bar) It’s like some daemonic speak your weight machine. If you are going to have British characters in the book you really need to find someone you can do a British accent. I am English born and bred and, despite my best efforts, simply could not carry on listening to the actor mangle any more vowels.

Here and now and then

Overall this is an enjoyable story.

My only difficulty with the audio book is that the ‘English’ accent of 2 characters in the story is distractingly poor. That these characters are English, seems to have no baring on the narrative anyway. Still worth a listen nevertheless.

I have been trying and trying to get over this narrator’s appalling English accent, and his poor narration in general, but I’ve had to give up. The story is good, but I’m afraid I can’t say much more as I found the narration so intensely annoying. I’d suggest reading it the old-fashioned way!

Good story and the reader is very good ... except at English accents. I would get more of Mike Chen’s work.

I listened to this on Audible and Holy Wow! What a beautiful and emotional story.

The narration by Cary Hite is silky smooth and adds so much depth to the already perfect words of the story.

It's one of those stories which causes you to reflect so much on the characters and the events which have played out.

Not well narrated and not well written.

The narrator: Audible - if you are reading this...please don't just play the first chapter when people are listening to samples. Pick out some dialogue for the sample because that's what makes or breaks it. This guy LITERALLY does a falsetto voice when voicing our protagonist's first wife. And it's not much better when he does the second wife. It was absolutely unbearable.

The book:
Full disclosure: I have a personal seething hatred for books that repeatedly reference "training" the main character has. "Kin's agent training kicked in..." "Setting aside all his prior training..." etc. So, we were off to a rough start from the prologue. But, that's a personal issue that you may not have.

The protagonist of this story was unsympathetic from the very beginning and just never caught up with me. The notion that a time travel agent would sacrifice the rules of his profession after he gets stranded - not just by forming personal relationships - but by getting married and even propagating! The fact that the other shoe will drop eventually all but writes itself. When Kin Stewart started protesting after his old life caught up with him, I found myself saying out loud, over and over: what did you think was going to happen?

Once back in his own time, it's not much better. Over and over Kin Stewart breaks the rules and then is downright enraged when faced with the consequences. You'll meet his future family (or rather, the family from his own timeline) who is full of forgettable characters: Penny Fernandez who lacks anything resembling a spine, Marcus Fernandez who is, apparently, a robot, and the Fernandez would-be parents in law. These guys are just...d*cks.

This came very highly recommended from lots of close friends and I really wanted to like this one. But, it just fell flat all around.

Although I normally listen to bios, history and science I ventured into fiction with a particular fondness for time travel sci-fi. I was not disappointed. This story pulls you along with intriguing characters, excellent plot and relatively plausible science. I found it very enjoyable and would highly recommend Mike Chen's book if you like this genre.

I would add that the narrator has a great voice but as some others have criticized, his deep voice does not deliver credibility for relating to women characters. I would not mention this except narrators like Roberto Scarlato move between multiple female and male characters seamlessly and convincingly. Cary Hite isn't bad. he has a great radio voice but it was a minor distraction when he moved to the female voice.

However, I highly recommend this book. It delivers surprisingly plot twists and compelling characters and story. Check it out!

Started slow, but then couldn't put it down

Started off a little confusing just figuring out who was who and what was going on, but then I got drawn into the characters and couldn't put it down. I had a little trouble with the performance - some characters were voiced very well, but I found the voicing of female characters just so so. They all sounded the same. Wasn't bad, just not the best. But the story line made up for it. Very well written novel, Also nice to have a satisfying conclusion - so many books are trilogies so when I find a fabulous stand-alone novel with all the loose ends tied up nicely, it's refreshing. Highly recommended.

It had this translated-from-another-language feel

★★½ stars, rounded up for the effort

I really wish I could give this novel a better rating, but it just didn't make the greatness cut for me.

It had this awful and stilted translated-from-another-language feel, all the way through. Everything was worded accurately, but hardly ever appropriately, more like a graphic novel than an actual words-only book. The text was littered with short sentence fragments, appearing just as often as actual sentences. I felt like I was reading the novel version of Joey's recommendation letter for Monica and Chandler to adopt a child.

"His heart had sprinted at the mere notion for minutes now."

See what I mean? It's just off somehow. Plus, in Audible, the narrator did the audio version no favors. He read with the weirdest cadence, like he couldn't figure out how to make heads or tails of the writing either! On a brighter note, I got to test out just how fast I could crank up the playback speed in my Audible app before I had trouble keeping up. (Apparently my max is 1.20% and then I'm approaching seizure territory.)

So, my take: two and a half stars for a semi-original adventure idea turned into a fun little romp through time with no unnecessary violence, sex, or foul language. It was simply a nice story that kinda needed an editor to stop the stilted insanity and give this baby some flow.

I enjoyed this time travel adventure, which is quite different from most books in the genre. This one involves people caught between two lives lives a century apart that seemed impossible to merge, yet the author did just that. The story had interesting and complex characters and an extremely satisfying conclusion. What more can you ask?

Hard to sit through the intro chapters of standard butterfly-effect time traveler trope. But the characters are engaging. Until they're not.

The performance is sub-par with awkward pauses and occasional useless staccato cadence. A practice reading or two before the recording would have helped. Or maybe Cary Hite is actually a robot?

Nice audible start for me

I enjoyed this book. It was a good twist on one of my favorites, time travel. I really like the characters and the author did a fantastic job of keeping the timeframe separate however blending them together when the time was just right. One thing in particular that I really enjoyed about this book was how fresh the future world was. However, the author did keep it real by incorporating a lot of things in life that we find comforting and we use every day. Sometimes even making them museum worthy. There were a few twists and turns along the way but I think the author could’ve done even better by incorporating more craziness. There are lots of subtle nuances of scattered throughout this book that you will learn to appreciate as the story progresses. I love the shout out to the English Premier league, soccer and fast food if I’m being specific. The performance was very well done and easy to understand. There were different character voices given to each character and you could definitely tell them apart. Lots of inflection with used to create tension and happiness in those scenes that required it. I think the one flaw was that narrators over excitement at some parts. I think he overdid it a little bit however, this did not take away from the overall value of the performance and the story. A good listen and a great way to close out 2019.

It was an interesting world but with a boring story. There was so much potential for an exciting thriller instead ot was an unsatisfying pseudo-romance.

The audio edits were VERY distracting.

Story was nice but it's better to CREATE emotion than talk about it. Ho hum but good while doing jigsaw puzzles.