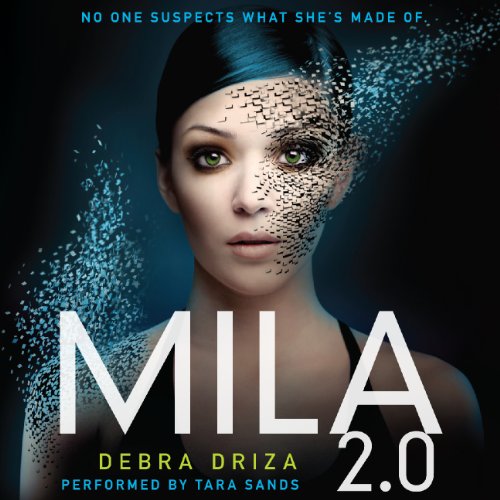 Mila was living with her mother in a small Minnesota town when she discovered she was also living a lie.

She was never meant to learn the truth about her identity. She was never supposed to remember the past - that she was built in a computer-science lab and programmed to do things real people would never do.

Now she has no choice but to run - from the dangerous operatives who want her terminated because she knows too much, and from a mysterious group that wants to capture her alive and unlock her advanced technology.

Evading her enemies won't help Mila escape the cruel reality of what she is and cope with everything she has had to leave behind. However, what she's becoming is beyond anyone's imagination, including her own, and that just might save her life.

What listeners say about MILA 2.0

Do you think MILA 2.0 needs a follow-up book? Why or why not?

The way it ends I'd say yes...but I'm not sure I would be jumping on a sequel.

Mila 2.0 was a fun read. I listened to this book pretty quickly and I thought it was cute!

I think the best part about this book was following along with Mila as she discovered what she truly is. She has to go through a pretty traumatic discovery of betrayal by the one person she truly cares about, and she has to try and learn to accept herself for what she is.

I think this book was probably written mostly for a lot younger reader than the books I’m used to reading in YA, so I felt like there were some situations that seemed a little too unbelievable to me. And I think this feeling is why I didn’t care as much about some of the characters while I was listening to the book in Audible.

There seemed to be moments where there was a lot more action than you would normally see in this kind of book. But trying to visualize these heroic moments when Mila is discovering her superhuman capabilities was a lot of fun as I was listening to the story.

I think the best part of the book is when Mila is put through a series of trials. During these trials, there is a character who’s introduced that I can probably say was the only one I actually really liked. However, the trials were interesting.

It’s the last part of the book that I’m not sure I care too much about. I felt like what happened was pointless from the standpoint of the overall story because Mila had to go through so many different things just to prevent this thing from happening, and then it happened anyways! And then…well, I just don’t know how to put it into words…um…yeah!

It's got it all

Would you consider the audio edition of MILA 2.0 to be better than the print version?

Yes--the narrator is good, and the story could so easily be a movie that the fast-paced scenes are fantastic to listen to, since you are sitting back and experiencing this cinematic action without having anything whatsoever to distract you. The narrator is also great at capturing the altering moods of the character's growing identity crisis--from thinking she is human yet having a frustrating memory loss to discovering she is an android and wishing desperately to not be one, to hoping it is a mistake--and also to falling into a depression of questioning her emotions (is this my programming, or is it genuine?). A fantastic listening experience.

Mila of course. Her issues really raise overarching questions of what it means to be "human" versus what it means to have feelings period (whether you were made in a lab or born with a true brain and actual heart).

Have you listened to any of Tara Sands’s other performances before? How does this one compare?

No I don't think I have, but I certainly would again.

Oh man I'm bad at tag lines, but it would be something like a tagline for Bourne Identity but also with a cyborg twist (maybe something akin to Blade Runner?). Hm maybe something like, Created to be a killing machine--they never thought the machine would have a say in it too. But that's pretty bad, isn't it? Like I said, bad at taglines...

I'm not usually the type to go for action books, but I had a great time with this. And I'm a sucker for identity-crisis stories, and this definitely has that. It basically has everything you'd want in a book.

Maybe this is unfair....because I'm only about an hour into this book, but I simply cannot continue. Knowing it is in the "young adult" category, I was hoping for something akin to Hunger Games or even Divergent. But this seems to be written for the young pre-teen with all of the girlish squealing and boy-crazyness early on. I think I might have liked this book when I was 12, but that was a long time ago.

The narrator’s voice is like listening to fingernails on a chalkboard. The story is undeveloped and shallow.

I enjoyed the story for this book. It wasn't cheesy or overly predictable. I'm looking forward to listening to book two.

A Disappointing Read - Too Much Hype

Has MILA 2.0 turned you off from other books in this genre?

If you could play editor, what scene or scenes would you have cut from MILA 2.0?

Another book that didn't live up to the summary hype!!!!