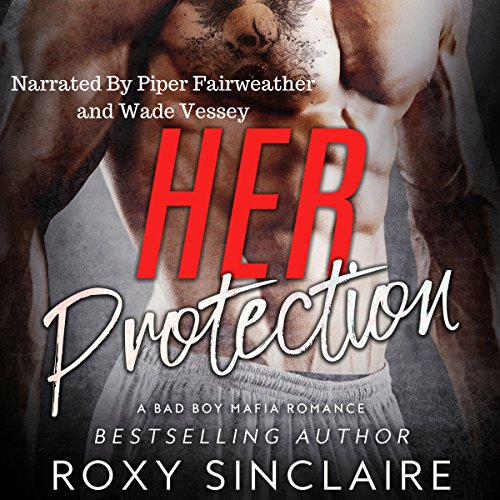 By: Roxy Sinclaire
Narrated by: Piper Fairweather,Wade Vessey
Try for £0.00

Jane is a US Army Vet turned investigative reporter - five years ago, she broke the story on a drug ring that sent a dozen men to prison, including boss Tommy Tilucci. Tommy recently got out of prison with the help of a crooked judge, and wants to pay Jane back for the damage she did to his organization. She did this in part by starting a dangerous relationship with Max Malone, one of Tommy's enforcers. Max was among those that went to prison, and he's also never forgiven Jane for betraying him.

Jane, though, has become famous for her investigative reporting, and although she was offered a job as an anchor for ANVC, she turned it down because what Jane loves is to be in thick of it; a desk would kill her spirit. In part this is because during her tour in Afghanistan her unit was pinned down and in order to save the two surviving members she nearly sacrificed herself and barely survived - in the process, however, she killed three Afghan civilians, and has never gotten over the guilt.

Five years later, Jane is investigating another potential notch in her reporter's belt - infamous bad boy Bryce Baron, widely believed to be a former hit man for Tommy Tilucci, and if Jane can prove it then not only will Tilucci end up back in prison, but Jane's career will be cemented as a household name in investigative journalism.

Bryce Baron, though, is both more and less than Jane expects. He was never really a hitman for Tilucci, though he was an enforcer for him after Bryce won a fight that he was supposed to throw and was forced to work for Tilucci to pay off his debt. It was that, or Tilucci threatened to take Bryce's most precious thing - his daughter, then a four year old girl, who didn't and still doesn't know that Bryce Baron is her father.

What listeners say about Her Protection

This book was one of those books that you pick up to listen to a chapter before bed and then watch the sun rise. It was fast paced and full of action. The narrators did a fantastic job and really blew it away I just wish I could give it more stars

A well deserved 5 star audio book written by the most wonderful author Roxy Sinclaire. Boy was I blown away by this fantastic, fast paced storyline full of suspense, corruption, betrayal, murder, mobsters, human trafficking and slavery and worldwide corruption.
With a magnificent HEA!
Both narrators did a really good 5 star job too, so refreshing to have at last a man narrating the male character, it makes all the difference in your listening to an audio book.
I voluntarily reviewed this audio book after receiving a free copy

I really enjoyed listening to this story, I especially love dual narration and this fact made this story more realistic.

This is a really marvellous story that is both romantic and exciting. It is very emotional and pulls at ones heartstrings. I enjoyed it very much. The presenter is excellent and enhanced my enjoyment of the story. I love Roxy Sinclair's books, she never disappoints.

UNDERGROUND FIGHTER FIGHTS FOR HIS WOMAN !

Tommy Tilucci was brought to trial but convicted on a lesser charge; the only one that would stick. He's a bad man. He's had his hands in numerous illegal dealings.
Jane is a journalist, for a highly rated network, who was given the task of previously investigating him. Now Tilucci's case is up for appeal. Tilucci is known for his vengefulness and that puts Jane in his cross hairs. Enter Bryce. Bryce is a mechanic/fighter who knows all about Tilucci. Bryce is all hard muscle and capable of taking care of himself and anyone else that comes along. Bryce has the info on Tilucci that Jane needs to put him away for good. It's not going to be easy though; apparently Tilucci has his hands in some big pockets throughout the city. Jane's not about to give up without a fight and with Bryce by her side, they realize they may have something worth fighting for.
Jane is a brave and capable 'take no prisoners' kind of woman. Fearless. She's also beautiful and sexy...a fact Bryce can attest to. Bryce has lived through pain and hurt. He's reluctant to open himself up to that again.
THIS WAS ONE WILD AND EXCITING ADVENTURE ! FAST PACED WITH COMPLEX CHARACTERS ! AMAZING NARRATION BY WADE VESSEY AND PIPER FAIRWEATHER ! I loved the reporter's pov. It felt like an episode of a law show running through my mind. Awesome concept!
GREAT CHEMISTRY BETWEEN JANE AND BRYCE, LOTS OF PASSION ! ! !

Another great book by Roxie

This book was so good it kept my attention the entire time. Great story line and beautifully written. Loved the narration.

Outstanding! I enjoyed every minute of this Mafia Romance. There is suspense, betrayal, father's love and sex.

Not the best Mafia romance but very good. There’s a twist in that the female is really the strongest character. Bryce is hot, honest, caring, and devoted but without Jane’s strength, he would not have been a part of the final take-down.

I like that Jane and Bryce have a slow romantic build and the story itself is full of action and suspense. Has an HEA, always a good thing ;)

Great narration, even the child’s voice.

Mafia romances have been a favorite of mine, and this book was so good. I loved the narration on this book! Both narrators were perfect for the parts and they added so much to the story with their distinguished voices for various characters. I read this book before I listened to it and found both to be excellent, but I think the audiobook might even be better. I received this book as a gift and have voluntarily written this review. This book is a standalone listen and part of a series. I thought the storyline was original and fast paced. The suspense was terrific, and I loved the entire book.

Jane is the investigative reporter whose story was responsible for mob boss Tommy Tilucci being imprisoned however he is back looking for vengeance.

Bryce is a mechanic and cage fighter however he used to be an enforcer for Tilucci until Tilucci killed his daughter’s mother and now all he wants to do is keep his daughter safe.

When Jane approaches Bryce asking questions they decide to work together to ensure Tilucci is brought to justice but they are unable to avoid their attraction to each other. With their lives on the line will Tommy be able to keep Jane and his daughter safe?

The narration of Piper Fairweather and Wade Vessey matched the characters very well and they did a great job with the various voices. I voluntarily listened to a copy of this narration.

Mafia romance and drama at its best

I loved this listen! I don't always enjoy mafia romances as a genre but when they are well done, there's nothing better. This listen was well-done.

The two main characters are raw and emotional and intense with baggage aplenty. You knew they had to find each other. You knew there would be an HEA. You knew the bad guy would get his. The joy and the intensity and the drama in this listen was in the getting there. The author, Roxy Sinclair, made us wait. She kept the drama taut and complex and the romance high.

The narration sold it! The duo narrators were the perfect choice. This is my second Fairweather/Vessey listen and the partnership delivered again.

This looks like the second book in a series (nothing missing in the listen though) and I'm looking forward to the next installment.

Jane is an ambitious investigative reporter who had done a story on the head of the Tilucci Mafia family. He was sent to prison but unfortunately due to corrupt judges and law enforcement he is now free.

Jane decides that she is going to dig deeper and make sure he goes back to prison for good. To do this she seeks information from Bryce who she believes is a hit man for the family. Bryce was forced to work for Tilucci after Tilucci had his wife killed and threatened his daughter. His daughter is now living with her aunt and uncle and Bryce has had no contact with her in order to keep her safe.

The chemistry between Jane and Bryce is instant and hot and they work together to bring down Tilucci. The story is very fast paced and full of action, none of which I can tell you about without spoiling the story for you.

I really recommend this story if you like action, hot chemistry and a good love story you will enjoy this book.

I enjoyed the narration. the story was a little slow but I still enjoyed it. I was voluntarily provided this free review copy audiobook by the author, narrator, or publisher.

Bryce and Jane are absolutely perfect for each other. The only thing is, they both have so many issues going on I was beginning to think they would never get it together, ya know, I needn’t have worried. But sheesh, the journey was really something! ... Piper and Wade seriously brought them to life. ..Well Done.