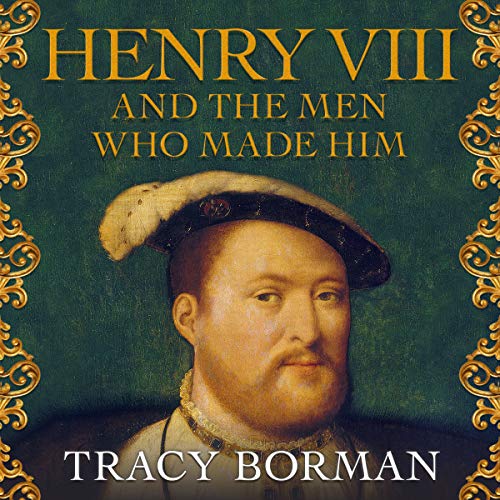 Henry VIII and the Men Who Made Him

By: Tracy Borman
Narrated by: Julie Teal
Try for £0.00

Tracy Borman, author of the best-selling biography Thomas Cromwell, takes us behind the scenes of Henry VIII's court and sheds new light on the most notorious Tudor monarch through the fresh perspective of his male relationships.

Henry VIII is well known for his tumultuous relationships with women, and he is often defined by his many marriages. But what do we see if we take a different look? When we see Henry through the men in his life, a new perspective on this famous king emerges....

Henry's relationships with the men who surrounded him reveal much about his beliefs, behaviour and character. They show him to be capable of fierce but seldom abiding loyalty, of raising men only to destroy them later. He loved to be attended and entertained by boisterous young men who shared his passion for sport, but at other times he was more diverted by men of intellect, culture and wit. Often trusting and easily led by his male attendants and advisers during the early years of his reign, he matured into a profoundly suspicious and paranoid king whose favour could be suddenly withdrawn, as many of his later servants found to their cost. His cruelty and ruthlessness would become ever more apparent as his reign progressed, but the tenderness that he displayed towards those he trusted proves that he was never the one-dimensional monster that he is often portrayed as.

In this fascinating and often surprising new biography, Tracy Borman reveals Henry's personality in all its multifaceted, contradictory glory.

A complete and detailed account of the Tudor dynasty, absorbing and detailed. Thoroughly enjoyable. Recommendable.

Super interesting, very detailed, and a perfect reader who brings some variety in her reading to help keep a slack attention span like mine on track.

I hadn't expected this book to be as interesting as it is. I was expecting a slimmed down Scarisbrick and this is completely different. The focus is on Henry, has to be given he dominated every company he was in, but the descriptions of the men that surrounded him and to an extent manipulated him is a real game changer. I thought this book was very well read. I have listened through once and will gladly listen through again.

Sadly this doesn’t live up to its title. A rehash of HVIII’s life is all.

Fascinating to those interested in British history and Henry viii. Probably the only audiobook which I listened to the end and then wanted to hear all again. Tragic and amazing!