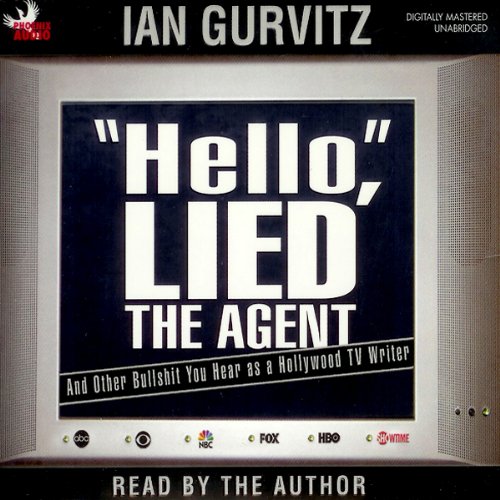 And Other Bullshit You Hear as a Hollywood TV Writer
By: Ian Gurvitz
Narrated by: Ian Gurvitz
Length: 7 hrs and 20 mins
Categories: Biographies & Memoirs, Artists, Writers & Musicians
4 out of 5 stars 3.8 (6 ratings)

As prevalent as TV is in our lives, most of us have no concept of what goes into creating a show, getting it on the air, and keeping it on. Perhaps we assume that the people in charge simply decide what amuses them at the moment, make those shows, stick them on, and wait to see if the public responds. Or maybe they just throw darts at a board?

The truth, as with most things, is more complicated. In 'Hello', Lied the Agent, Ian Gurvitz has produced a corrosively funny insider's look at what being a television writer is really all about. In his personal journal, he details two years in the life of a Hollywood television writer - the dizzying ups and downs, the rewrites, the executives, the pitch meetings, the table readings, the studios and networks and execs in a riveting expose of the business.

"It occurred to me that keeping a journal while I was going through the development process might illuminate a side of the business few people get to see, and give them a behind the scenes (God, I hate that overused ET phrase) look at the day-to-day experience of being a writer in Hollywood. OK, that's partly bullshit. I'm not that altruistic. The truth is, after 20 years in the trenches, I found myself bitching about many aspects of the business and needed an outlet, which left either writing a book, doing stand up, seeing my shrink more often or suffering in silence. But since I don't have the balls to try stand-up, there's no reason to waste a shrink visit bitching about the business when I've got more seriously f***ed-up issues to deal with, and there's no money in suffering in silence - that left book. Here it is...."

Some might be a tad off put by the delivery of the author's narration; for example, the swearing and bitterness.

However, I enjoyed it and took it as who he was: a comedy writer who had some success in the industry (he wrote for Wings and Becker) and many failures and knows what it's like to be both screwed and fought over by networks.

Ian discusses what it was like writing and selling scripts; having to please network executives while maintaining his original story (and sanity) without sugar coating a thing.

He gives a few tips, and those interested in pursuing writing comedy scripts (or any sort of script) should find his honesty helpful.

I'm just a fan of how things are in television "behind the scenes", so I found it quite enjoyable.

The only issue I did have was how he read the work: not every author will make for a great narrator and he isn't the best...he does sound like he is reading his work in an unnatural fashion, which can be distracting. It sounds like he's just looking at the page and reading it without thinking too much about what he's saying.

Overall, I enjoyed the audiobook, but it's not for everyone.

The book was very interesting, but what an angry guy! His style is very New Yorker "in your face" and living in L.A. hasn't mellowed him any. Never knew so much went into the development of T.V. If you ever thought you had a great idea for a tv show, hear this book and you'll think twice.

I bought the Kindle version of this book some time back and was really disappointed that the formatting was screwed which made it pretty much unreadable but from the bits I was able to read I was hooked. Ian Gurvitz takes you through the daily grind of writing for television where the expectation is pretty much 80% rejection. When an outline or proposal is greenlighted for development, Ian shows how over the course of its development, studio pressures result in a final product being very different from what was greenlighted. You can feel Ian's frustration as he has to accept, often nonsensical, changes if the project is not to be cancelled. I am delighted that this book is available on Audible because Ian is a pretty funny guy (and a very nice guy too - he added some helpful and apologetic comments on Amazon as a result of the review of the Kindle version). This book is fascinating, frustrating (if you can empathize with the author) and a delight. I would recommend this book to anyone interested in the behind the scenes daily grind of television from a writer's perspective.

I have listened to this book several times now, and enjoyed it each time. What really made it fun to listen to was the author reading his book with unashamed passion. His opinions and approach to the television industry made me laugh several times outloud, and anyone who ever thought it was easy to enter and work in the TV industry needs to listen to Ian's book. Well worth the credit!

What disappointed you about 'Hello', Lied the Agent?

I understand how cynicism pervades the TV industry with its rampant rejection and random decision making, and I get why the author needs to refer to "a certain well-known actor" on a "popular network sitcom" rather than give the actual names . . . but what is his excuse for being boring?

Would you listen to 'Hello', Lied the Agent again? Why?

Yes, I probably will. I'm interested in the television industry and he gave a very detailed account of what it's like to try to get a show (or 5) on the air. It was a unique insight you don't often find, especially since most books are written by people who got lucky and succeeded. This was a more average, win some/lose some perspective.

What was one of the most memorable moments of 'Hello', Lied the Agent?

At one point, he was saving the empty water bottle from every meeting he had and throwing it on the passenger side floor of his car. That visual sticks with me. He thought if he could just have a few more meetings, he could make his living on bottle deposits.

Which character – as performed by Ian Gurvitz – was your favorite?

It made me laugh often. It was a little too dark and depressing at times, but did not make me cry.

There were a few slow points, some times when I got tired of his voice, or when it got too cynical. But overall it was funny and worth listening.

This was not very interesting

I kept waiting for something to happen or an interesting anecdote, but the whole book was one big complaint. It sounded like he was reading from his dairy rather than a dairy entry that he had adapted and embellished for this book.

After 25 years in Hollywood, albeit married to a TV writer so somewhat removed from the carnage, this is exactly the way it is. The making of TV shows, like legislation and sausage, is revolting and normal folks shouldn't watch too closely. Wannabee TV writers beware. The usual advice to aspiring actors, writers, directors, producers, etc is "If you can do something else, anything else, do it", and it's true. All the successful actors, writers, directors, producers, etc, that I ever met, couldn't possibly be happy, or competent, doing anything else. All you wannabee's, think about pursuing Plan B.

Probably the worst book I ever paid for. It was suppose to be about television writing & all you get is his opinions on God, politics, etc....

not worth your time

i cant think of one

i already have 8 books in a row , ideas that changed the world is my next

Did Ian Gurvitz do a good job differentiating all the characters? How?