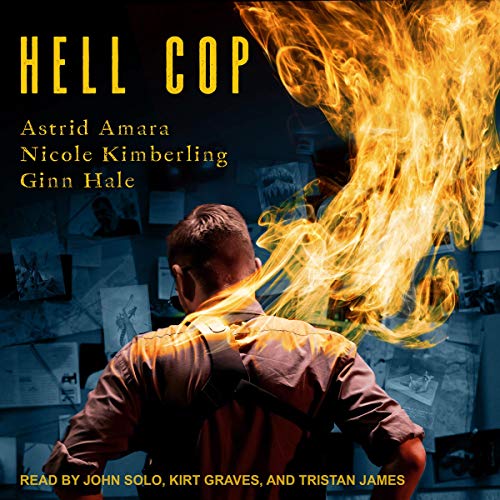 "Next of Kin" by Astrid Amara: Jay Yervant is a Hell Cop so powerful that his bare skin incinerates anyone he contacts. Isolated, he is tortured by desire, until he meets Brian, a sensual young man who touches him with impunity. But Jay's burgeoning hope is threatened when a malevolent sorcerer unleashes a host of demonic assassins against Brian. Keeping his lover may cost Jay his life.

"Red Sands" by Nicole Kimberling: Anthropologist Michael Gold's got problems. His apartment's been ransacked, his dad's missing, and he's been framed for murder. As a half-demon he expects trouble from the city's Hell Cops. Instead, he gets Argent, a man with intimate knowledge of Michael and whom Michael can't penetrate with his psychic powers. So does Argent want to clear him or expose him?

"Touching Sparks" by Ginn Hale: When photojournalist James Sparks discovers an underworld of sorcery, blood sports, and demonic drug traffic, he turns to Detective Ben Moran, a hard-bodied Hell Cop whose touch sends James's pulse racing. But when James uncovers evidence of police corruption he realizes that Moran may be in as much danger as he is.

What listeners say about Hell Cop

I loved to revisit this world after my first read almost 10 years ago. Very cleverly shared between three of my favorite authors. I hope part 2 will be made into an audio too!

Hell Cop- a mixed bag of good and terrible

"Hell Cop" is a 12 year old book, which has been given life in 2020 as an audiobook. (Who knows why it took so long to make it into audio format.)
I read it some years ago, enjoyed it quite a bit, and was glad to revisit it in audio. It's comprised of three stories, written by three different authors, set in the same 'verse.The setup is cool, and there's some really nice world building that goes on in all three of the stories. They interlock to some extent in that main characters in one story show up as minor or supporting characters in the others. This format is a really interesting one, and was revisited a few years later by these three authors in "Hell Cop 2".
1. Next of Kin- Narrator was so dreadful, monotonous, completely lacking in inflection or vocal characterization, for this first selection, that I had to DNF. As I recall, the story is good and well-written, but I just couldn't wade through the terrible reading.
2. Red Sands- much better. Not only a cool story with a great ending plot twist, but excellent, expressive narration.
3. Touching Sparks- an enjoyable, quite short story; narration, meh.
All in all, not awful enough to want to return, but rather disappointing. Given the creative premise, "Hell Cop" could have been a 5-star offering, but the narration just didn't shine as it could have with this material. I hesitate to recommend; you might dig "Hell Cop" more if you read it the old-fashioned way.

It's probably not fair of me to review this one since this is far from my favorite genre... I did enjoy the last story though. And the audio performed by Tristan James, John Solo, and Kirt Graves were all well done.