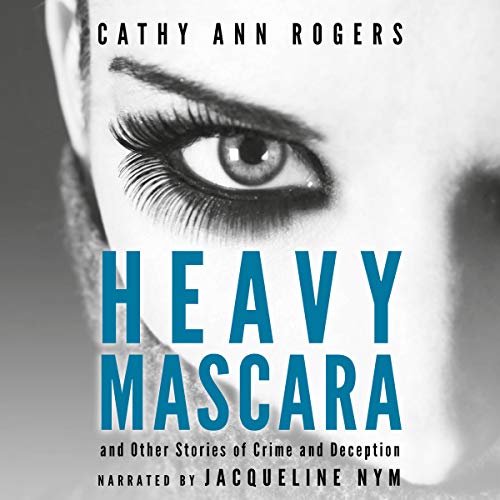 Behind every face, these flawed yet authentic characters are driven by their own sense of skewed logic: A man fends off accusations by the woman he loves; a lonely woman is in pursuit of the perfect stranger; a naïve woman believes she has found her dream man; a desperate woman escapes from a risky relationship; a convalescing woman finds terror when her car breaks down; a woman becomes a stalker's target.

From young women to elderly matrons, from the savvy sophisticates to the socially inept, the characters in these stories depict life's defining moments, where one calculated move cements the unalterable fate of another and the inescapable consequences of karma and conscience.

What listeners say about Heavy Mascara

This group of short stories are well crafted with a interesting assortment of characters. The Writer has tried to create a wide variety of women with most emotions being introduced. The Narrator does a good job with the material and helps make this a entertaining experience. This book was given to me for free at my request and I provided this voluntary review

I enjoyed several of the short stories and was glad to see that the author had grouped them into 1 book, vs trying to sell 15, 30-60 min books. Several of the stories were really good and took thought and imagination to develop. The narration was ok, but I think it was the sound quality is not what it should be though, which made the book not as enjoyable as it should have been. I feel like the narrator has a lot of potential and once she gets a few more books under her belt, I think we will see a night and day difference in the performance This audiobook was provided by the author, narrator, or publisher at no cost in exchange for an unbiased review courtesy of AudiobookBoom

I found this to be an interesting mix of short stories. Some I thought were a bit better than others. The narration was ok and the stories were ok. Nothing real special about them but they were interesting enough. I was voluntarily provided this review copy audiobook at no charge by the author, publisher and/or narrator.

Tales of Terror and Happy Endings

I was given this free review copy audiobook at my request and have voluntarily left this review. I truly enjoyed this collection of macabre short stories heavily centered on a cast of female characters very distinct and heterogeneous. What I found interesting is that even if all of the stories are very dark, they all have a happy ending for the main female characters. So in a way, we are dealing with a "happily ever after" genre, even if a little disturbing. The writing is truly well done and the narrator did a pretty good job. I think she could put a little more emphasis in her narration, but it was pleasant just the same. Highly recommended.

A collection of gritty short stories worth the listen. The narration was a tad blah for my taste. I was given this free review copy audiobook at my request and have voluntarily left this review.

Neat and tantalizing stories about all kinds of women, and the tough decisions they make. It's raw and real, fun and compelling. Interesting tales, I enjoyed them - well written and well narrated, great job! I was given this free review copy audiobook at my request and have voluntarily left this review. Please take a moment to click the "YES" ("Helpful") button below if you found this review helpful :) Thank you!

I love short stories and as far as I could tell, these stories were well-written. My issue was with the narration. The sound quality was inferior. It felt hollow and each story lacked distinction. I just didn't enjoy this listen at all.