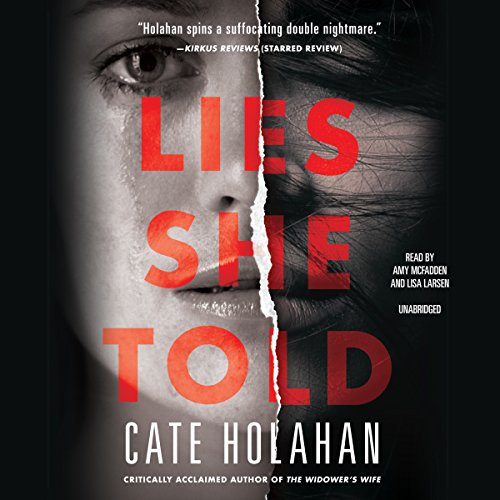 By: Cate Holahan
Narrated by: Amy McFadden,Lisa Larsen
Try for £0.00

Sometimes the truth is darker than fiction.

Liza Cole has 30 days to write the thriller that could put her back on the best-seller list. In the meantime, she's struggling to start a family with her husband, who is distracted by the disappearance of his best friend, Nick. With stresses weighing her down in both her professional and her personal lives, Liza escapes into writing her latest heroine, Beth.

Beth is a new mother who suspects her husband is cheating on her while she's home alone caring for their newborn. Angry and betrayed, she sets out to catch him in the act and to make him pay for shattering the illusion of their perfect life. But before she realizes it, she's tossing the body of her husband's mistress into the East River.

Then the lines between fiction and reality begin to blur. Nick's body is dragged from the same river, and Liza's husband is arrested for his murder. Before her deadline is up, Liza will have to face up to the truths about the people around her, including herself. If she doesn't, the end of her heroine's story could be the end of her own.

What listeners say about Lies She Told

Loved the pace and twists in this - Characters we’re really believable - Accents on reading of Beth grated a bit !

Keeps the listener interested in the parallel stories and the welfare of both female leads.

I very much enjoyed this audio. suspense was brilliant. would recommend. Great Author. Thanks

I enjoyed this...kept me listening ..the story was good and I just about kept up with the many characters....good enough for me to get her latest audiobook....

Amazing writing, gripping to the end and it takes a path (or two!) you don’t see coming.
Brilliant!

This has joined my All Time Favorite Thrillers list!
The author & 2 narrators, I'm so in love with you all 💕

time for a literary shower

You know how you feel after you eat half a bag of mini kit kat bars or at least one serving of every sweet at a potluck dinner? Like you're a bit dirty, somehow, and need to eat a carrot and do at least an hour on the exercise bike? This book left me feeling like that. Only without any of the pleasure that the kit kats or desserts would give me. The whole time I was reading it, I was just hating myself for going on with it, but I had paid for it and, after returning several less-than-stellar books in a row, I felt like I couldn't return yet another.
Ugh. This book is just stupid. The writing is cliched and hackneyed. The plot line is BEYOND ridiculous and you don't even give a crap about a single character, so you cannot forgive any of the other flaws. Life is so precious and I just wasted too much of it (not to mention space in my brain, which is also limited) on this rubbish. Sigh.
I have to remember, in future, to read the negative reviews and not just the glowing reviews which are apparently written by friends, family and editors (if there are any in this world anymore) who are invested in the book doing well.

Wow, I love this book! It started out a little bit slow and at first I thought this was going to turn out to be chic lit and that doesn't thrill me. But I persevered! And I am so glad I did, this book turned out to be anything but.
There is an author who writes crime novels married to an attorney. She is writing a novel about a crime reporter who is married to a prosecutor. The reporter just had a baby and finds out her husband is having an affair. The novelist is on fertility medication and finds out her husband is having an affair. Both husbands are charged with murder when their illicit partners are murdered. The lines between fact and fiction are crossed when the fictional character begins to communicate with her author. The last three hours are pulse pounding as you wait to find out and there's really no clue about the author or her husband's guilt, or her sanity.
The story plays out with two narrators (Amy McFadden and Lisa Larsen), each character having their own voice even though one is "fictional"... Both narrators are excellent.
This book reminds me of a matryoshka doll (a Russian nesting doll) where you have the main doll on the outside and dolls of decreasing sizes nested one within the next.
This book has my HIGHEST RECOMMENDATION!
If you found this review helpful please indicate so.
Thank You.

This dramatic thriller deals deftly in the real and the surreal, and the inscrutability of the interchange between an author's life versus her imaginings as a writer.

Under editorial pressure to produce a long-overdue second bestseller, Liza takes to her laptop to write what she hopes will be an explosive romantic suspense hit. We hear alternating POVs between Liza in real life, and Liza's character, Beth, as she develops on the page in 'real-time.' Beth has an infant; Liza has been trying to get pregnant for years. Both have lawyer husbands. Beth's husband is cheating; Liza's husband is devastated since his friend and law partner Nick disappeared, and Liza becomes suspicious about the circumstances. Lines between truth and fiction, memory or dream, become blurred, leading to a climactic ending that did not disappoint.

This novel was well-written and the plot was unique and interesting. Once I got into it, I was hooked- about 1/4 of the way in- so give it a while to sink your teeth in. The characters were thoughtfully conceived and portrayed realistically in their roles.

Also, the relationship between Liza and her long-time best friend, Chris, is one of the best portrayals of an honest, bulletproof, one hundred percent, got-your-back (instead of 'stab you in the back') female friendship that I have seen in a book, ever. I called my best friend as soon as I finished it!

The narration was great for Liza, so-so for Beth-her tone was kind of flat at times making it lack feeling.
Otherwise-
Suspenseful, dramatic, murder mystery with a twist- I highly recommend 'Lies She Told.'

The story of this book was just okay. It’s an interesting premise, but the author used plot twists that have been used over and over again, and I’m so tired of seeing them in thrillers.
The narration was hit and miss for me. The narrator for Liza did a great job, but the narrator for Beth was awful. Over pronouncing words and never ending a sentence on a full stop almost drove me crazy. Overall, I’d say find a different thriller to listen to.

Suspense and betrayal at every turn

Compelling and imaginative with a new twist on tried and true storyline. Loved the narrators, highly recommend!

one of the best I've listened to in awhile ... I was definitely not quite sure what was going to happen up until the end. definitely recommend! 😃👍

You won't be able to put this book down. A surprise ending. unbelievable good! 👍

Kept my attention, I didn't want to stop listening!! Great performance by narrators. Thoroughly enjoyed! Would be great on screen!

Second Half is Better Than First Half

I seriously considered quitting this book multiple times in the first half. The set up takes way too long. The lead female characters are unbelievable and overly emotional. The narration is very poor.

However, it did pick up significantly in the second half and I found that I was actually enjoying the story line. I was surprised by the plot twist.

Overall I wouldn't recommend this unless you're looking to get rid of credits.

Would you try another book from Cate Holahan and/or Amy McFadden and Lisa Larsen ?
The narrators saved this book. Both narrators were excellent. The book itself was very disappointing. I selected this book because I enjoyed "The Widower's Wife" and, perhaps, I had high expectations. I listened to the entire book and it was not time well spent.

Would you be willing to try another book from Cate Holahan? Why or why not?
No. I did not like this book or her "Dark Turns" book. As previously stated, I really enjoyed "The Widower's Wife".

What about Amy McFadden and Lisa Larsen ’s performance did you like?
Both narrators were excellent. I always like it when there are multiple narrators because it makes a book easier to follow and also provides the listener with a better understanding of the characters.