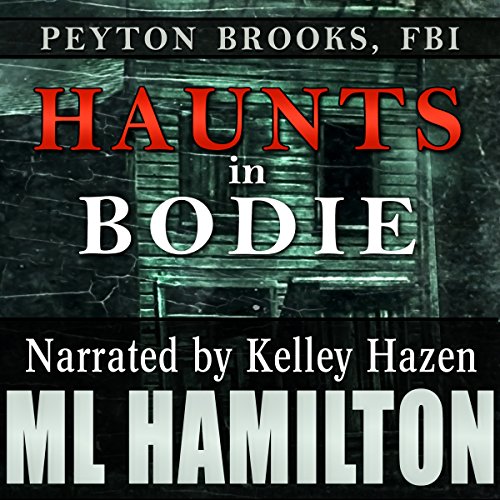 For the past few months, Peyton has fought to become an integral part of the Ghost Squad. Their cases have taken them on adventures around the world, but nothing can prepare them for the most ironic case of their careers - solving a murder in the historic ghost town of Bodie.

With Marco embroiled in his own battle with the Chechen mob, Peyton finds her attention divided between the situation at home and a suspect that’s as ethereal as a ghost. Unfortunately, Radar is dead in the crosshairs, and Peyton may be the only one who can save him.

As the Ghost Squad ventures into the Wild West, Peyton begins to question whether there really are haunts in Bodie.

What listeners say about Haunts in Bodie

once again brilliant storyline and I love the characters, these stories keep you on the edge of your seat some tears at times,narrator brings characters to life smooth transition from one voice of character to another great work.

Is this your first Peyton Brooks book? If yes....stop! This series is fantastic and best enjoyed from the beginning. The plot and characters develop through the books in the most interesting and wonderful way.

That said, this book is fantastic! ML Hamilton really explores the dichotomy between a law enforcement person doing their job and agreeing with what they are doing. Marco and Peyton both face situations in their respective jobs that challenge them. What happens when the criminal you are looking for actually murdered someone who was guilty of a bigger crime? It is always humbling to understand that the police sometimes have to separate themselves from what needs doing. They have the difficult responsibility of finding the guilty party without judging them in the process, in spite of what they may personally feel. On a more personal note, Peyton and Marco finally agree they want to get married. Now if only they could get time away from the real world to actually make it happen!

Abe and Jake, two of my favourite characters, can often be relied on to bring friendship and comic relief to the previous books. In this book, however, things are different. Both are still funny, but they show signs of being vulnerable as well. For a change, Marco has to step up and extend the hand of friendship and experience to these men as they struggle with themselves.

I absolutely love visiting these characters again and again in each book. ML Hamilton has the knack of out doing herself with each new book. I am already eager for more! Paired with Kelly Hazen's stellar narrative performance, these books come alive in the most remarkable way!

Loved it, LOVED IT... Did I mention that I loved it?

Another great book and great narrration

I really enjoy the Peyton Brooks character in this series. ML Hamilton has written another awesome adventure that spans time. The book is more like several stories woven into one. There is the historical story of Bodie, The story of Peyton and Marco's relationship, and their current cases. This book has many emotions that involve love, hate, revenge, compassion, despair, friendship, love, and admiration. Kelly Hazen did a wonderful performance with these feelings and conveyed it so well in the characters voices. At one point in listening to this book, I wondered if my review should be titled 2 weddings and a funeral. I enjoyed the twists this book had and thought it was well written on how choices affect us . I thought this book was time wells spent listening and worth a credit. I will definitely listen to more books by this author and narrator. I do not like giving away spoilers in my reviews, and with that said, I loved the ending and found it very fitting.

If you have been following the series you won't believe what happens. It keeps you on the edge of your seat. If you are starting here - and trust me on this because I've introduced about a million friends to Peyton Brooks - you will still be able to thoroughly enjoy this book and then go back or forward to listen to more. What makes it work are consistent well thought out characters,storylines that encourage you to guess and get involved. And heart. This series just has so much heart. And humor. It's addictive!

I was voluntarily provided this free review copy audiobook by the narrator and found it very entertaining and intriguing. This fast paced plot is supported by very unique and endearing characters. Following several cases that are being investigated makes sure the action never stops, and the suspense keeps you guessing. As you listen, you'll experience a whole range of emotion, and you won't want to turn it off. This series is perfect and the narration just adds to the enjoyment. This has been become my favourite series and I'm so looking forward to the next book.

This was a fun read - the humor balances the serious part of the story which revolves around crimes against women
The ending was perfect - way to go Marco Baby !

Wow! The cases that the FBI and SFPD are investigating will keep you on your toes. Just when I thought I had things all figured out there would be a new twist.

As this series has progressed, I have become very attached to these characters. Thank you M.L. Hamilton, for sharing your wonderful stories and characters with us.

Kelley Hazen continues to entertain with her fantastic performances. She really brings these stories to life.

I love all her books, sorry i forgot the rate this one sooner. I have allot her books and enjoy all of them. Can’t wait until Margo and Peyton finally get marry. They belong together.love all the new characters in the book. And enjoy the narrator of the book who make each and everyone of her characters come alive. Always give her a five star and recommend reading all of her books. If i could read paperback i would have everyone of them on my shelf. But since I can’t read them and only listen to them now because i am blind. I thank the author and the narrator and audible in finding away for the blind to enjoy listening to new and old authors and the narrators that make or break a book . Looking forward to the next book in the series. Thank you m l Hamilton.

Haunts in Bodie (Peyton Brooks, FBI #6) was a great read by M.L. Hamilton. Peyton has done everything she can in the last few months to become an integral part of the Ghost Squad. Nothing prepares the team for solving the murder in the historic ghost town of Bodie. Marco finds himself in a battle with the Chechen mob. Although Peyton has her attention divided with her home life and searching for the suspect, she may be the only one who can save Radar. I really enjoyed reading this book and can’t wait to read more by the author. I loved the life that Kelley Hazen brings to the characters.

I read the book but 1st time to listen and enjoyed its narration. I loved all of the characters: Peyton, Marco, Jake, Maria, Abe, Stan, Marco’s family, Radar, Tank, and Bambi. I like how she relates to people they are full of suspense and action, hint wedding. Recommend to anyone who likes murder mysteries with fun characters and good narration. Look forward to her next book to see what happens with Marco and Peyton. I was given this free review copy audiobook from Storytellers production and have voluntarily left this review. THANK YOU!

Too much lovey dicey

Too many mentions about how much he/she loved her/him. A few times is fine. Even important to the story, but there was too many times in this book.