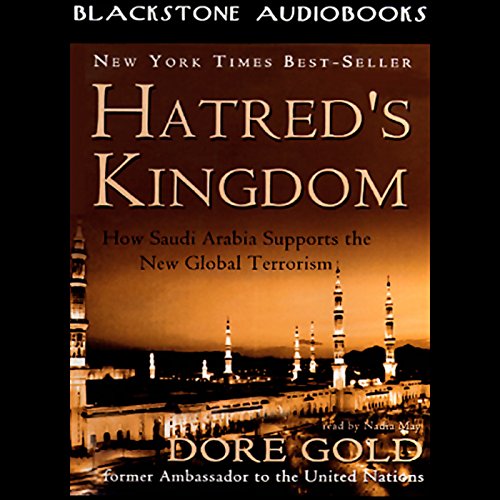 From New York City to Bali, Indonesia, ideologically motivated terrorist groups have chillingly demonstrated their global reach. And terrorism is now far more lethal than before.

But what is causing it? Only as new reports have emerged about Saudi Arabia's links to terror has the United States begun to look closely at the Saudi kingdom, America's purported ally. Now, in Hatred's Kingdom, Middle East expert Dore Gold provides the startling evidence of how Saudi Arabia not only is linked to terror, but in fact has spawned the current wave of global terrorism.

Using previously unpublished documents, Gold, the former Israeli ambassador to the United Nations, exposes how the deeply ingrained hatred that has provoked the new terrorism has its roots in Saudi Arabia's dominant religious creed, a radical Islamic offshoot known as Wahhabism.

"If you read one book to understand the roots of al-Qaeda's fury and the hostility to us within the Muslim world, it should be this - Dore Gold's superbly told history of the Wahhabis." (R. James Woolsey, former director of the CIA)
"May's soft-spoken, sweetly accented voice is well suited to the material. She reads with a calm that allows the listener to concentrate on the material, which offers a fascinating, seldom heard perspective on the history and growth of terrorism." ( AudioFile)

What listeners say about Hatred's Kingdom

Well read and well researched. I'll loook it up at my local library and get a paper copy, as I'd like to go over the historical details.

This book traces the connection between the Wahabi sect of Islam and the current rise of Islamic fundamentalist terrorism. It makes a clear destinction between the peaceful mainstream Islam and the more radical and violent Wahabi sect. The history of this sect, their beliefs, and their supporters, mainly the Saudi royal family, are documented in detail. This book clearly provides the best explanation of why 9/11 occurred and highlights the hate filled dogma of this religous sect which compels terrorists to commit murder.

This is the scariest book you will ever read. It makes you realize how powerless Washington is and how the Saudis use oil and religion as a weapon. The Saudi Royals can do as they please and the world can't do a thing about it.

Great critique but a bit PC

Gold does a great job of detailing all of the pernicious activities of the Wahhabi movement, especially regarding how the education system with the Kingdom has been hijacked and the Saudis have built up support for their movement by building mosques and schools around the world. Gold also does a great job of bringing out the true message of the Wahhabis which is one of extreme intolerance towards those who disagree with them. However, Gold continues the PC line that Islam is not the problem and it is just a small group of extremists. In fact, the most powerful factor in the Wahhabi cause is its total adherence to the Quran and Islamic juridsprudence. Granted, it is just one interpretation of the Muslim holy book but it remains a fundamentally sound interpretation and appears to be that most in accord with Islam throughout its history, particularly in its first few centuries. But, all in all an eye-opener we should all read to be aware of the Saudi threat.

The names are not fimular to me and the reader is not American so the combination makes this a more involved read.