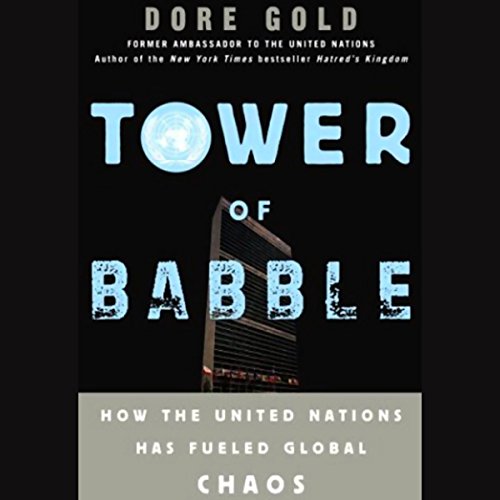 How the United Nations Has Fueled Global Chaos
By: Dore Gold
Narrated by: Robertson Dean
Length: 8 hrs and 59 mins
Categories: Non-fiction, Politics
2.5 out of 5 stars 2.7 (3 ratings)

In this follow-up to his best-selling expose about Saudi Arabia's support of global terrorism, Dore Gold, a former ambassador to the United Nations, reveals how the United States faces a dangerous world filled with terrorists and troubling regimes because the United Nations has created a global crisis with its moral relativism. Asserting that the United Nations has failed in its mission to preserve peace, that anti-American and anti-democratic forces have hijacked the UN, Gold argues that the United Nations, founded in 1945 to hold individual nations accountable to a community with common democratic values, has abandoned the guidelines for acceptable conduct and punishment of its violators. Gold carefully documents this devolution, starting with the Cuban Missile Crisis to the 2003 war against Iraq and beyond.
©2004 Dore Gold (P)2004 Books on Tape, Inc.

Would you try another book written by Dore Gold or narrated by Robertson Dean?

No. The author likely has some personal vendetta against the United Nations, as they do not look at the situation in an unbiased light/

Has Tower of Babble put you off other books in this genre?

No. This is a standout horror in the genre.

What aspect of Robertson Dean’s performance might you have changed?

It was very grand and impressive, and he has a good voice for these sort of things.

Anger and irritation. I had expected a balanced analysis of the problems of the UN, or even a rubbishing account which gave a decent summary of some of the weaknesses of the organisation. Instead I got a book which suggested that George Bush was taking on the mantle his father had left him, an utterly absurd statement as he is the president of the united states and should be acting for the country and not because of his father's legacy. It rubbished the UN again and again and its sensationalist writing only made me think that the author must be trying to deliberately misguide readers - it's common courtesy to at least give the opposite side of the argument and then refute it. Instead the book barely touches on anything but its supposed damming account of the United Nations, making it sound more absurd than accurate.

The author should try writing a book which people may actually believe.

This is an extremely important book; fascinating and full of essential information for understanding international affairs in today's world. A knowledge of UN history enables one to sift through increasingly biased news reports to get a grasp of reality. Looking around today's world, fingerprints of the UN's attitude of moral equivalency are everywhere. UN history is also a good example of the effects of corruption in places of unchecked power. To say that this book is essential is putting it mildly. Its content covers a political arena in which our electorate needs much education. This is a life changing book...take advantage!

U.N.: Ally of Tyranny and Chaos

Why did "The Killing Fields" Pol Pot never face a tribunal?

Why didn't the UN take action on Rawanda, Somalia, or much else?

Dore Gold (author of the excellent "Hatred's Kingdom") writes a very timely book. A very profound book. Moral Equivalency is not tolerance, it rings the death knell of Western Civilization.
Gold answers the questions and puts forward a strong case that The U.N. is not benign.
This book is a News Hound's delight.
Robertson Dean narrates perfectly.Buy this book! You'll be glad you did!

This is the only book that I can recall giving five stars to, because it is so timely in its nature and well done in its content. We are largely uneducated about the origins, purpose, and history of the UN, and given that a large contingent of American political thinkers believe that this organization should have an increasing influence in our policymaking, we had better change that. Dore Gold does an admirable job of laying out in detail the seminar events in the UNs history, from its founding and in how it has reacted to numerous crises. Almost universally, the performance of the UN has been an abject failure when measured against the ideals upon which it was founded. One need only look at Syria's place on the Security Council and Libya's place on the Human Rights Commission to see the level of self-parody that this worse-than-useless organization has sunk to, but there is a mountain of evidence presented by Gold that dams the UN in detail. Failure to prevent or even stem genocide in Cambodia, Rwanda, and Bosnia; failure to deter, chill or resolve regional conflict after regional conflict; total flaccidity in the realm of human rights; the Oil for Food fiasco; the Keystone Cop weapons inspection regimes... it's all there in black and white. The UN is a failure that causes more problems than it solves. Whatever we decide to do with it, we should never rely on it let alone--God forbid--submit a shred of our sovereignty to it.

I learned a lot about the UN struggles

Loved this from the start. very informative and thorough. I wholeheartedly recommend this book to any student of international politics.