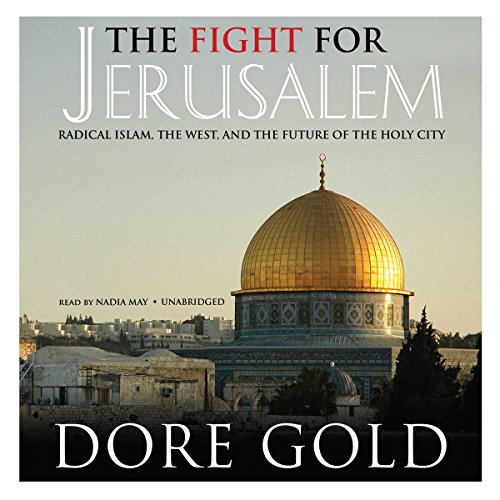 The Fight for Jerusalem

By: Dore Gold
Narrated by: Nadia May

April 13, 2006. A Jerusalem Post headline reads: "Jericho man murdered over home sale." The 42 year-old father of eight was kidnapped, shot seven times, thrown into his car, and set on fire, because he had sold his Jerusalem apartment to Jews.

Radical Islam has long desired to seize Jerusalem and make it off limits to Christian and Jewish believers. In this revealing book, Dore Gold, best-selling author and former Israeli ambassador to the United Nations, reminds us that the war on terror is also a war on faith. Gold argues that only an Israeli-controlled Jerusalem can preserve the city's freedom and its openness to people of all faiths. Referring to recent archaeological discoveries, he suggests that uncovering Jerusalem's past and the truth of biblical history can be the key to saving its future.

What listeners say about The Fight for Jerusalem

Jerusalem - the epicenter of faiths

The "Fight for Jerusalem" by Dore Gold is a very good journalistic, fact book.

So, in some sense it is difficult to review, because it has sort-of apologetic character, that would be difficult to praise if it was a novel. But this is the book, that opens ones eyes on the nature of the conflict over Jerusalem. The conflict that originates in inability of many people to recognize the central role of Jerusalem and, in particular, of Temple Mount, to those who are not Muslims.
It is hard to believe but there are still people (mostly on the Arab side of the conflict) that try to deny the sanctity of the place for Judaism. There are theories, endorsed by some Palestinian circles, telling that Temple Mount was not the place where Holy of Holiest was in the past.

Dore Gold, through the survey of Jerusalem history, goes to the description of current situation in Jerusalem. What is incredible in this book is the revealing of facts that we have no chance to know. For example, all good people of the world condemn Iranian's leader Ahmadinejad, but we do not know that this guy believes in the return of 12th Imam, Mahdi !!! What it means in practice, is just horrible. In the name of his idea of G-d, he is ready to destroy the world, and to start this destruction in Jerusalem. Unfortunately, short survey of Internet using "Ahmadinejad Mahdi imam" supports what Dore Gold wrote....

The another fact, not very well known, is the removal of tons of rubble from The Temple Mount,by WAKF (Arabic governing body of Temple Mount) - the rubble that contained artefacts fromeven the First Salomon Temple. Unfortunately you could easily confirm that it indeed happened....

Maybe Dore Gold is a bit too appologetic, but, for God's sake - it is for the good reason as
the book shows how important for all people of the world is the religious freedom on the Temple Mount.

I gave it 5 stars, but it's dry as toast. It would be better read than listened to, but the content itself is flawless, and presented very well. I just can't imagine that the book could be written any differently, and so it's just a dry subject.

Very thorough, but not overly detailed; Easily understood in a complex subject. The narrator did a good job of pronouncing arabic names BUT her tone was sometimes irritating - I would have preferred a lower, male voice.