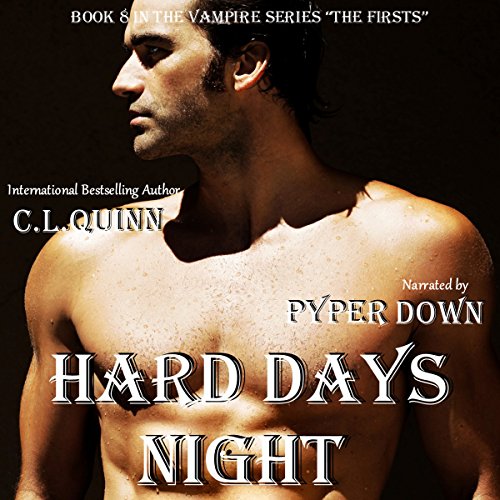 My name is Mal. I'm a cop in Los Angeles. I can tell you, I thought I'd seen everything.... Turns out I was wrong. One night, on a forced vacation, watching a sunset on a lovely beach, I intercepted a call for a homicide. It wasn't my jurisdiction, but I decided to respond until the locals could get there. I secured the scene on a lonely stretch of road near the ocean where a naked man had been shot in the head. God, the man was perfect. Big, sexy...I had to stop myself from touching him and contaminating the crime scene. I promised him that we'd find his killer. It broke my heart that such a magnificent man was dead. He was dead, yes...but apparently not permanently. What the hell? I fell backward in shock when he took a breath. No, in all of my years on the street, this I had never seen! Then the night got much more interesting.

The last thing that Ahmose expected when he finished a swim in the sparkling Pacific Ocean was to get a bullet in the head. To be fair, if he'd expected it, it would never have happened. Now, as he revives from the gunshot, a beautiful detective is insisting that she needs to call for an ambulance to help him. He needs her help, but not like that. Blood, and plenty of it, is all he requires to heal from a simple death.

Book eight of the best-selling series The Firsts is finally here, the story of the first blood vampire, the leader of the children of the moon - Ahmose's story, back in LA for more heat!

Another great story! looking forward to the next!

Beat book in the series so far. Getting better and better. Thanks so much and looking fwd to the next one!!

Author C.L. Quinn has outdone herself once again. This is by far the best vampire series that I've come across. Quinn can take this series going on forever, making it a long series. I found this story to be exciting, dangerous, and they always seem to be romance involved which is a plus. I'm sorry but this is a short review but I do highly recommend this series.

Narrator, Pyper Down blows me away as she always seems to do. Pyper makes me feel like I'm there inside the story. She's a very talented narrator. Her knack for distinguishing accents and voices are superb. She takes me away and as with Quinn, Down blows my mind to.

C.L. Quinn is my Hero!! I ABSOLUTELY LOVE HER!! This is my New Favorite Series! I have LOVED every single one of these books!! Mal is a No-nonsense, rough around the edges woman!! Amos has had a lot of stress and thing's to worry about lately, so he decided to take a vacation! There Chemistry is off the charts the night they meet on the beach! Amos might be technically dead, but he still wants Mal!! There Story is one of my favorite's!! Pyper Down is one of my top favorite narrators!! She has this perfect Sultry, sensual voice that draws you in!! I truly can not wait on book 9!!

I HAVE TRAVELED THE WORLD WITH THIS SERIES!!!

If you could sum up Hard Days Night in three words, what would they be?

I knew Ahmose was a good man, but we saw his softer side, his loving heart and how he loved his family!

When he comes to her and is standing at the foot of the deck...he was so humble...I love him!!!

I wish they would make this series into movies!!!

I am in love with this series!!! I am loving on to book 9 right now...it is actually already in my ears..lol This was Ahmose's story, and our dark beautiful prince finally found his mate! It wasn't easy for him and Mal, she actually really made him work for it! But he was patient and kind with he, and she could not resist him...and they both got a very special gift out of their love...it was wonderful!!!

AWESOME ADDITION TO THE SERIES, THEY JUST KEEP GETTING BETTER AND BETTER! I HIGHLY RECOMMEND!!!!!

I received this book as a gift in exchange for a honest and unbiased review. I am a CL Quinn fan. Her books, ALL OF THEM are so exciting, thrilling, adventurous, even dangerous, yet romantic! They are also paranormal vampire books! I love listening to her audio books. I swear these books are way better than any movie could ever be! Listening to the narration is almost like I am there.

The author CL Quinn did a fantastic job writing this book as she always does. Her words keep me on the edge of my seat, yet I can't wait to see what is going to happen next, yet at the same time, she has me saying wow and yummmmmmmmm. The narrator, Pyper Down is fantastic as always. This lady does accents like she was raised in each and every country, fluently! Pyper breathes life into every word and gives this story as with all of CL Quin's stories a heart beat! Every time CL Quinn has a new book come out in audio, I have to read it! I put it ahead of all my books and I cherish every word! This lady can write!!!

the story was excellent. i didn't/don't like is hard headed know it all Heroines; it just ruins the books and very annoying.

What was one of the most memorable moments of Hard Days Night?

after the baby was born ,, she starting calling to her daddy

What does Pyper Down bring to the story that you wouldn’t experience if you just read the book?

i did enjoy her.

Was Hard Days Night worth the listening time?

NOT AS PASSION FILLED BUT JUST AS ADDICTIVE

First Blood Vampire Ahmose had left his magically hidden African Haven - he just needed to get away, be on his own and contemplate - yes he had a lot to be thankful for but something was missing in his life which made him broody, thoughtful and sad. He didn't realise he was being stalked but after taking a swim one night he went to investigate a noise and that's when he was shot in the head. Mal was settling into the beachside house when her police scanner alerted her to a dead body just up the road and asking if anyone was available to help so she went to watch over the body until the local Cops could get there. Mal was shocked and stunned at the dead man's handsome face and perfect body that she couldn't help but stare at.... but nothing could have prepared her when he opened his eyes and stared right back at her.

And that was the start of their journey - a journey that would involve a one night stand, First Blood magic, murder, kidnapping, misunderstandings, heartbreak, loss, joy, mourning, reconnecting, romancing and passion. As well as various sub plots such as an anti vampire Group determined to destroy them all and the unveiling of surprising twists and shocking connections. Along with all this, are the many characters involved and their actions, motives and POV's that only a very talented author could dream up, twist, entwine and wrap it all up into an entertaining and addictive story where each puzzle piece fits so well together to eventually make the perfect picture.

Worth a credit? Although I didn't feel this was a very romantic story as the H/H spent more time apart than together I did feel their strong connection to each other and there was a lot of other action going on within this book that easily kept my interest. And the long anticipated shock that ends Ahmose's pain, loneliness and torment and the nerve-wracking reunion when, at last, the beautiful truth is finally revealed. There are loose ends which will continue in the next book and one character heads off to her destiny in Seattle. Another well narrated addition to The Firsts series and YES, IMO, creditworthy.

I did not expect to have to return this book.

I struggled with it from the start. Made it to chapter 7 and so surprised with the current good ratings, that this story was not worthy of a credit for me.. Returned. Why? One word comes to mind....lifeless. The Narrator did nothing to resuscitate. I actually rushed to return it and plan not to try any books in the series.