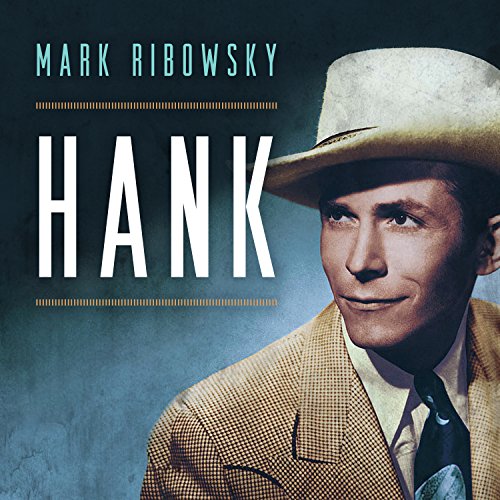 By: Mark Ribowsky
Narrated by: Tom Perkins
Try for £0.00

After he died in the backseat of a Cadillac at the age of 29, Hank Williams - a frail, flawed man who had become country music's first real star - instantly morphed into its first tragic martyr. Having hit the heights with simple songs of despair, depression, and tainted love, he would, with that outlaw swagger, become in death a template for the rock generation to follow.

Six decades later, Mark Ribowsky now weaves together the first fully realized biography of Hank Williams in a generation. Examining his music while also re-creating days and nights choked in booze and desperation, Ribowsky traces the miraculous rise of this music legend - from the dirt roads of rural Alabama to the now-immortal stage of the Grand Ole Opry and finally to a sad, lonely end on New Year's Day 1953. The result is an original work that promises to uncover the real Hank beneath the myths that have long enshrouded his legacy.

What listeners say about Hank

The REAL story behind a true legend

Great history of Hank Williams, without the bullsh... Hollywood polish, for a change, and refreshingly so. Narrator Tom Perkins does an honorable job, though I had imagined someone more "country" for the narration. Well written and well worth one's time and attention.

interesting history of a country legend

great narration but the story was a slow depressing descent. I wonder how this man managed to fillander and drug so much at such a young age but chronic pain, a greedy medical imposter, and spinal cord damage won out in the end. Hank's talent continues to live on in his music.

A Remarkable Tale of Woe

A cautionary tale for any would-be celebrity, a foolish man destroyed by alcohol and the greed of others. Had Elvis read this book, perhaps he would have lived differently. Deep research and excellent writing, topped off by a perfect narration, make this book a fascinating, heartbreaking listen. Especially if you have access to the songs as they are described.

The book goes into considerable detail;too much detail in fact. The book is as much about the songs of Hank Williams, as it is about the life of Hank. Just too much minutiae. As with all books on this subject, the story of Hank Williams is truly sad, amazing, and disturbing. It’s the prime example of greed, disloyalty, distrust, and an early demise.

The book did have certain details that I had never heard before. So, it’s worth the listen for that. But overall, the book was just too long, and focused on minor details. Finally, THE NARRATOR WAS TERRIBLE. He speaks like a robot and puts no emotion into the characters.

Hank or F*ck the south

The narration is painfully monotonous and I can't tell if it's actually a biography or a big f*ck you to the south, to country music and to Hank himself. I can't believe I actually spent money on this. I hope I can find a better Hank Biography elsewhere.

The Legend of a Alcoholic: Hank Williams Jr.

Hank Williams Jr loved to stand on a stage and sing his sad songs playing his guitar, but there was something more he loved even more: Alcohol. I will continue to listen to the legacy of Hank's music, however, it's very unlikely I will pick up this very sad, very redundant at times book again.

Leaves nothing out, except Hank III

It’s a great story; tells the whole story pretty much of a man who was way more of a myth and a legend to me. Fascinating! Narrator was playing it more like a “Mutual of Omaha” voiceover? Could have used a real character like Sam Elliot, but that would have been expensive. Great book though? Was hoping they would have at least mentioned Sheldon (Hank III), as he really looks and sounds like his grand daddy.

I was born by the river

Narrative was average tried to listen to it but couldn't. very depressing. such a shame

lots of new info I didn't know. Every Hank fan needs to read this book

I thought this was a well written, well performed book. I can’t say I came away with much affection for Hank Williams after this story though. While he was indeed a great songwriter and performer he was not a great person. With his substance abuse and general disregard for most anyone or anything made for an interesting companion to his public image. That is how humans are though and I was happy to listen to what I think is a fine audio book.