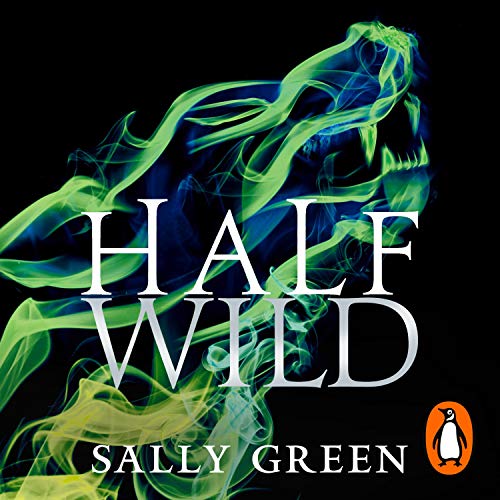 By: Sally Green
Narrated by: Carl Prekopp
Try for £0.00

Penguin presents the unabridged, downloadable audiobook edition of Half Wild, the stunning sequel to Half Bad by Sally Green, read by Carl Prekopp.

After finally meeting his elusive father, Marcus, and receiving the three gifts that confirm him as a full adult witch, Nathan is still on the run. He needs to find his friend, Gabriel, and rescue Annalise, now a prisoner of the powerful Black witch Mercury. Most of all he needs to learn how to control his Gift - a strange, wild new power that threatens to overwhelm him.

Meanwhile Soul O'Brien has seized control of the Council of White Witches and is expanding his war against Black witches into Europe. In response an unprecedented alliance has formed between Black and White witches determined to resist him. Drawn into the rebellion by the enigmatic Black witch Van Dal, Nathan finds himself fighting alongside both old friends and old enemies. But can all the rebels be trusted, or is Nathan walking into a trap?

What listeners say about Half Wild

Witches gone feral - a dark and gritty YA

First of all, don't listen to this until you have listened to the first book, Half Bad, as this picks up pretty much straight after that and it won't make any sense otherwise. What with the Resistance taking on an evil magical government and camping out in the woods it's impossible not to make comparisons to Harry Potter but there's a LOT more blood. Some of the violence is quite graphic but it's not gratuitous. I'm surprised to see that Amazon says this is suitable for 9-11 year olds but I think it's more suitable for slightly older readers.

Nathan is gradually finding out about his gift and continues to be confused, angry, inarticulate and often irrational. Basically he's like any teenage boy but with the added problem of having magical powers he doesn't understand and being hunted by people who want him dead.

I really like Carl Prekopp's narration. He makes a very believable teenager and manages a range of accents consistently and well.

Half Wild doesn't suffer too much from "middle book in a trilogy" syndrome as there is a lot of plot and character development and it does reach some kind of conclusion while setting up the final book, Half Lost. I will definitely get that when comes out next year.

easier to get into than the actual book

fantastic book and narration. stayed with me long after listening to it for the first time

Such a good book and read well! Can’t wait to listen to the full series

so inticing couldn't stop listening just like half bad the pervious book. so good. incredible narration from Carl prekop.

This is a love it or hate it book, I think. It starts off in a very strange way and I thought my player was faulty for a while. The constant repeating of the same phrase was annoying at first/

If you keep going you start to realise this stuff is all part of the main character, and necessary - so it becomes normal after a while, and the strange noises are explained.

I listen to my books in my car during my 2 hour journey to and from work, but ended up, sometimes, sitting outside of work not wanting to stop listening.

Keep going. Trust me, the story gets better and better.

The narrator is excellent and really makes the book stand out as an audible gem. Great sequel, leaves you wanting more.

Really carried away by this series. Great narration by Carl Prekkop as always. Really evocative.

Continuing the story from Half Bad, the characters are established enough to believe and have an interest in/connection with. Even more gripping because of this. Looking forward to the final part of the trilogy.

The story goes from strength to strength, and again the narration from Carl Prekopp keeping the story intense and real !!

This book really builds on the hype of the previous one. I can't get over it's climactic ending.

It takes us back to the detrimental world of Nathan, our chosen one, per se. We can really see Nathan evolve as a boy in a very unfortunate circumstance. And it all really culminates to Nathan's choices. Can love be but questioned for it's reality? Do the people you believe you love really feel the same and as strongly as you love? Hearts and families are put to the test. Nathan is making his own future now. Does he stand with his family and loved ones. Or do his loved ones really just fall around him, breaking and dying.

The wonderful narration makes a fast paced and gripping story all the richer. Would recommend to anyone who likes a good magical story about young people.

Entertaining, but not as strong as first book

Would you consider the audio edition of Half Wild to be better than the print version?

Mostly likely! I only listened to the first and second book, didn't read, but Carl Prekopp's performance deserves serious praise and recognition. I've checked out some reviews of the print version of these books, where readers often complain of a lack of action, and flatness of characters. Prekopp breathes life into the story in a way that took my breath away when I first started 'Half-Bad' and kept me hooked even when the story kind of dragged.

It usually really bothers me when male narrators use affected tones for female character dialogue, or over the top accents-- but Carl Prekopp does a great job with it! His accents are subtle and nuanced, and he really makes each primary character's voice recognizable through tone and annunciation. Very impressed!

I was torn with this book. The first book grabbed me in the beginning, kept me curious and intrigued and hungry for more info about this world of black and white witches. Whenever the plot started to lag in the first book, Green would write in a little tidbit to keep my mind from wandering, like the Story of Saba, for instance (a small taste of the origin of white and black witches retold as a legend.)

I felt this book focused a little too much on Nathan's interior monologues and also his romantic relationships, so when action DID happen, it kind of felt like I was dropped into the scene all of a sudden with no warning or context.

I appreciate that Green wrote a bi-curious character in a way that normalized Nathan's sexual identity rather than getting preachy about it or making it the protagonist's main internal struggle. But I wanted to hear more about the history that created this culture of dichotomy that Nathan is stuck in the middle of!

I wanted more world-building, and I less introduction of new characters. After a while, most of the new characters started to bleed together in my mind, I found it hard to remember who they were and why they were important, whereas all the characters from the first book had really strong presence but very little further development (Annalise and Marcus being the primary exceptions). I would gladly have listened to a book that was twice as long if Green had filled those pages with details on character and world history.

The middle really dragged for me, and I lost focus, but the last 2 hours pulled me back in, in a BIG way, making me think I'll have to listen to the 3rd book despite my reservations. I wish the story had focused on Marcus more, because his role towards the end of the book is the most interesting and intriguing part of the whole story!

Which character – as performed by Carl Prekopp – was your favorite?

It's a toss-up! Love Gabriel and Marcus both. The first book also has some AWESOME character enactments that sadly are not part of the 2nd book due to untimely deaths, etc, but I won't say who so as not to spoil it for potential readers!

No, but I wanted to! It has an inertia that makes it hard to find a stopping point, and I mean that in a good way. Prekopp's narration is so great that I didn't mind rewinding and re-listening to the parts where I lost concentration and zoned out.

I know it's overdone, but I would LOVE to see this series brought to the screen! I feel like this story, this fantasy world, merits the level of explanation that JK rowling brought to the Harry Potter series, but for whatever reason, the author chose brevity over character and detail development. Usually its the other way around, but I think the characters might become a bit more 3dimensional on film than they were on the page!

What really makes this story is the story teller. Carl Prekopp is an outstanding narrator. He doesn’t just read the lines , he becomes the characters. I will listen to all that he has narrated.

I loved the book, and I couldn't imagine it any better. Carl Prekopp seems to have completely accepted the role of the characters.

The narrator does justice to voicing the different characters and adding just enough dramatization to really pull the reader in, but not so much that it looses the feel of "reading."

I don't know who would enjoy a book I didn't enjoy.

Has Half Wild turned you off from other books in this genre?

The audio reader was varied in creating unique character voices. The sound stage enhanced the story.

What character would you cut from Half Wild?

I do not like Gabriel's character. Nathan needs a boy friend, not a boyfriend. He has never had the benefit of a childhood friend. The arthur has already provided Annalise as a young love interest, so Gabriel love struck behaviour was irritating and dumb.

I did not like this book story or direction from the 1st book. I struggled to read half way through the book before I stopped reading it. I did eventually read the ending to see if I wanted to read the upcoming third book and I think I'm finished with this series.