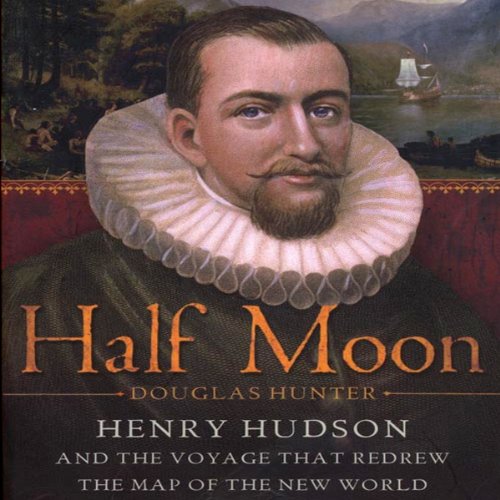 By: Douglas Hunter
Narrated by: Kurt Elftmann
Try for £0.00

A bold new account of explorer Henry Hudson and the discovery that changed the course of history.

The year 2009 marks the 400th anniversary of Henry Hudson’s discovery of the majestic river that bears his name. Just in time for this milestone, Douglas Hunter, sailor, scholar, and storyteller, has written the first book-length history of the 1609 adventure that put New York on the map.

Hudson was commissioned by the mighty Dutch East India Company to find a northeastern passage over Russia to the lucrative ports of China. But the inscrutable Hudson, defying his orders, turned his ship around and instead headed west - far west - to the largely unexplored coastline between Spanish Florida and the Grand Banks.Once there, Hudson began a seemingly aimless cruise - perhaps to conduct an espionage mission for his native England - but eventually dropped anchor off Coney Island. Hudson and his crew were the first Europeans to visit New York in more than 80 years, and soon went off the map into unexplored waters.

Hudson’s discoveries reshaped the history of the new world, and laid the foundation for New York to become a global capital. Hunter has shed new light on this rogue voyage with unprecedented research. Painstakingly reconstructing the course of the Half Moon from logbooks and diaries, Hunter offers an entirely new timeline of Hudson’s passage based on innovative forensic navigation, as well as original insights into his motivations.

Half Moon offers a rich narrative of adventure and exploration, filled with international intrigue, backstage business drama, and Hudson’s own unstoppable urge to discover. This brisk tale re-creates the espionage, economics, and politics that drove men to the edge of the known world and beyond.

What listeners say about Half Moon