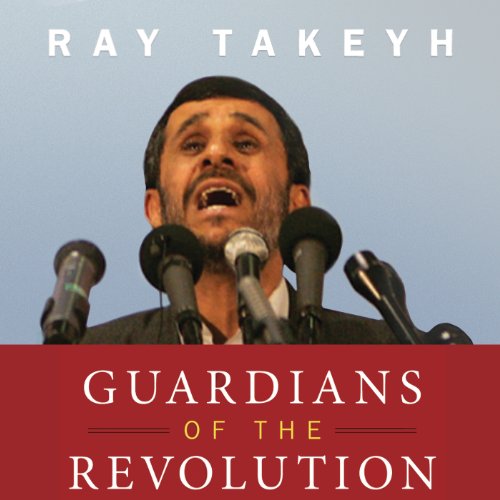 Guardians of the Revolution

Iran and the World in the Age of the Ayatollahs
By: Ray Takeyh
Narrated by: Peter Ganim
Length: 13 hrs and 39 mins
Categories: Non-fiction, Politics
4.5 out of 5 stars 4.5 (2 ratings)

Guardians of the Revolution

For over a quarter century, Iran has been one of America's chief nemeses. Ever since Ayatollah Khomeini overthrew the Shah in 1979, the relationship between the two nations has been antagonistic: revolutionary guards chanting against the Great Satan, Bush fulminating against the Axis of Evil, Iranian support for Hezbollah, and President Ahmadinejad blaming the U.S. for the world's ills.

The unending war of words suggests an intractable divide between Iran and the West, one that may very well lead to a shooting war in the near future. But as Ray Takeyh shows in this accessible and authoritative history of Iran's relations with the world since the revolution, behind the famous personalities and extremist slogans is a nation that is far more pragmatic - and complex - than many in the West have been led to believe. Takeyh explodes many of our simplistic myths of Iran as an intransigently Islamist foe of the West. Tracing the course of Iranian policy since the 1979 revolution, Takeyh identifies four distinct periods: The revolutionary era of the 1980s, the tempered gradualism following the death of Khomeini and the end of the Iran-Iraq war in 1989, the "reformist" period from 1997-2005 under President Khatami, and the shift toward confrontation and radicalism since the election of President Ahmadinejad in 2005.

Takeyh shows that three powerful forces - Islamism, pragmatism, and great power pretensions - have competed in each of these periods, and that Iran's often paradoxical policies are in reality a series of compromises between the hardliners and the moderates, often with wild oscillations between pragmatism and ideological dogmatism. The U.S.'s task, Takeyh argues, is to find strategies that address Iran's objectionable behavior without demonizing this key player in an increasingly vital and volatile region. With its clear-sighted grasp of both nuance and historical sweep, Guardians of the Revolution will stand as the standard work on this controversial - and central - actor in world politics for years to come.

I say solid introduction because Guardians of the Revolution only covers the major players, factions, and events. It doesn't delve into the lives of Iranians, nor much into the Iranian parliament. Even major events, such as the hostage crisis, leave the reader (at least this reader) wanting more information despite receiving an entire chapter covering them.

As such, Guardians of the Revolution does not stack up in depth when compared with books such as Magnificent Delusions, The Plantagenets, or Legacy of Ashes. However, it does a good job of examining and analyzing the Iranian perspective of the past 40 years of events. It serves as a good teacher if you are interested in learning more about Iran, and are not already well-acquainted with the subject-matter.

At this point it is not as contemporary as may be hoped, as it ends with the Green movement and Ahmadinejad still in power. I, for one, will be looking forward to a sequel or update that examines Rouhani's return to the presidency, Iran & ISIS, and the end of US sanctions.

Regarding the difficulty of the book: This is a scholarly text, written by member of the Council on Foreign Relations. As with the other books I have mentioned above, a reader should expect a degree of professionalism with regards to the subject matter and the language used in such a text.

Regarding the political leanings of the book: I personally felt that this book was too generous regarding the Iran-Contra scandal, and it could have rebuked both Clinton and George W. Bush far more than it did.

I was looking for more facts and more detail on how the people of Iran live under the current government. I wanted to know what makes them different and whether or not they really hate America.

This reads like a master's level academic book. The vocabulary is intelligent but hard to follow. My mind constantly wandered while listening.

A good book, good overview but not great

This is a good overview of the factions within Iran since the Revolution. It’s a good summary and really puts some thought into how these factions work with each other and the outside world. It’s not the most comfortable story.

Well written but at times too willing to accept the “press” version of history. Overall I recommend as an entry point into the topic.

Verbose, topical, and without substance

It was like listening to someone read through an entire thesaurus. If I hear the word "exigencies" one more time, I'll scream! Never have so many words said so little about so much for so long. Throughout the entire book (yes, I listened to all of it because I'm cheap) I kept waiting for the introduction to end.

Much of the data was good, but I'd skip it.

I have read just about every book there is to read on this subject, and am an Iranian myself. I appreciate this book and the direction from which it is written, however I would have preferred it without the political slant.

It's very clear that the author has a dislike for Bush 43, and that gets in the way of the content of the book. It's unfortunate that such an in depth book is hindered by political views.

The authors anti-Bush rhetoric isn't the only negative. The author also goes on to blame Iran's problems on everyone but Iran. He's sympathetic to the jurisprudence in Iran, and makes the case that the rest of the world hasn't tried to negotiate or engage them, which is false.